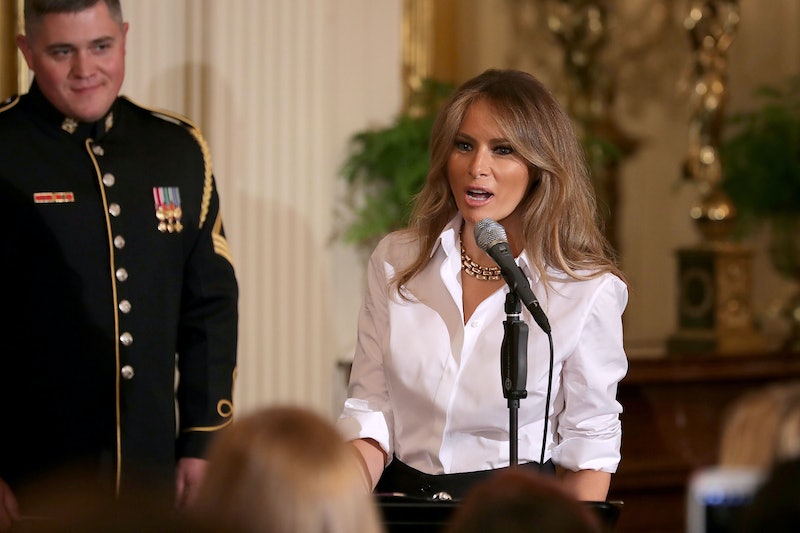 On Tuesday, Kathy Griffin set off a firestorm for a photoshoot featuring a phony Donald Trump severed head. On Wednesday, Melania Trump joined the crows of condemnation and questioned the comedian's "mental health" for participating.

The offending photo of Griffin was, while entirely a mock-up, violent and gory, so it won't be linked here. Suffice it to say, it showed the comedian holding up the president's severed head, with a relatively blank look on her face. Griffin, for her part, has apologized for the image, saying she was "wrong" and went "too far."

It's no surprise that the Trump family took wild offense to the image, and it even drove the typically silent Melania to put out a statement. In it, she called the image "very disturbing," and concluded by calling Griffin's mental health into question:

According to TMZ ― not the source you'd typically expect to get insider political news from, but take it for what you will ― Trump family sources claim the bloody photo scared the president's 11-year-old son Barron, who they said did not realize the image was a fake when he first saw it on TV. According to the sources, Barron panicked and called out for his mother.

Griffin's grisly photo shoot was condemned by a slew of people on both the political left and right, and the apology-extracting portion of this controversy is already over. Here's what Griffin said in a video posted to her Twitter on Tuesday night.

Hey everybody, it's me, Kathy Griffin. I sincerely apologize. I'm just now seeing the reaction of these images. I'm a comic, I crossed the line. I move the line then I cross it. I went way too far. The image is too disturbing, I understand how it offends people. It wasn't funny. I get it. I've made a lot of mistakes in my career, I will continue. I ask for your forgiveness. Taking down the image. I'm going to ask the photographer to take down the image. And I beg for your forgiveness. I went too far. I made a mistake and I was wrong.

And on Wednesday morning, the fallout from Griffin's action took an abrupt, albeit unsurprising turn. CNN terminated Griffin's deal to co-host the New Year's Eve program alongside Anderson Cooper (who also condemned the photoshoot as "disgusting") this year. This brings her 10-year run at the network to an end, and means Cooper is now in the market for a new New Year's Eve partner.