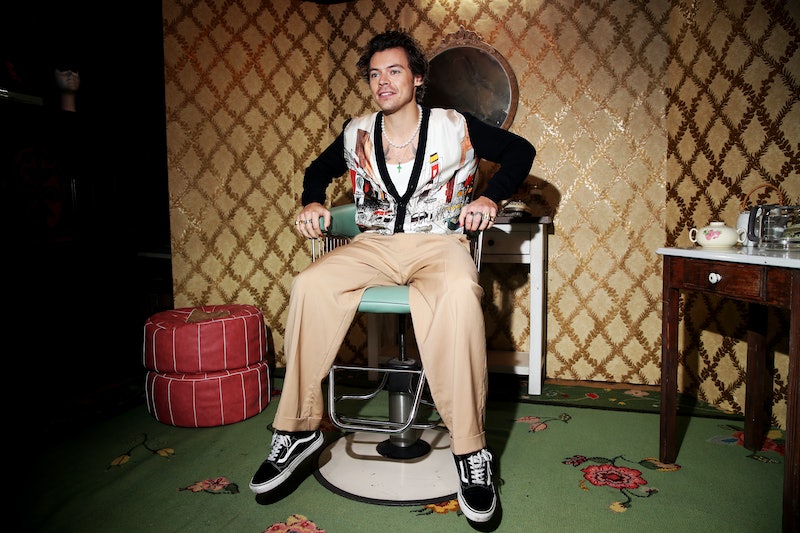 Fans have always loved Harry Styles with a passion strong enough to fuel the burning sun. With the release of his second solo album on Dec. 13, not much has changed. Memes and tweets about Styles' Fine Line highlight how the 1Der can still make fans spontaneously burst into tears — it might just be his superpower.

Styles had previously unveiled three singles from the 12-track album, "Lights Up," "Watermelon Sugar," and "Adore You." But these songs evidently didn't adequately prepare his fanbase for what else Fine Line would have in store. But really, nothing could have prepared fans for the range of feelings that Styles' album is putting them through.

The singer previously warned fans that Fine Line would be a bit of an emotional rollercoaster, telling Rolling Stone in August that the album was "all about having sex and feeling sad." So early songs on the album, like "Watermelon Sugar" and "Lights Up," left fans wanting to party or to get sexy. But, in the album, those songs are quickly followed by the one-two-three punch of the breakup songs "Cherry," "Falling," and "To Be So Lonely," leading to an emotional rollercoaster with some very significant dips in the mood department.

Needless to say, fans were distraught at the abrupt transitions.

One reason the back-to-back-to-back trio of "Cherry," "Falling," and "To Be So Lonely" is so melancholy is because fans suspect that at least one of them is about Styles' ex. At the end of "Cherry," Camille Rowe can be heard speaking French. The pair reportedly broke up in July 2018 after a year of dating and her appearance on the album has fans divided. The Rolling Stone article from August 2019 had Styles' collaborator and friend Tom Hull revealing that the musician had taken his breakup from the French-American model hard. So while Rowe's voicemail on the track has some people brushing up on their French, others are experiencing anger, sadness, or even gratitude regarding the apparent inspiration Styles gained courtesy of his heartbreak.

The Editors' Notes for Fine Line on Apple Music indicate that Styles seemed to confirm that his breakup with Rowe was the basis for "Cherry" in an interview with Apple Music's Zane Lowe. But even with that sad backstory, "Falling" is the main track that has fans weeping.

In the chorus, Styles sings, "What am I now? What am I now? What if I'm someone I don't want around?" He told Lowe in the Apple Music interview that he wrote "Falling" because "I had started to feel myself becoming someone I didn't want to be, and that was really hard." And it's definitely a tough track for fans to get through without tearing up.

For people who already have tickets to Styles' 2020 world tour, Fine Line was an excellent reminder that they'll be seeing Styles on stage soon. So even if they'll never feel completely ready to experience Styles singing these songs in person, the tour is an exciting, if not emotionally exhausting, prospect.

Whether Harries will be put through the emotional wringer at his Love on Tour or simply through repeat Fine Line listening sessions, the takeaway from the reactions is that Styles continues to have the ability to whip his fanbase into a beautiful frenzy featuring all the feels.