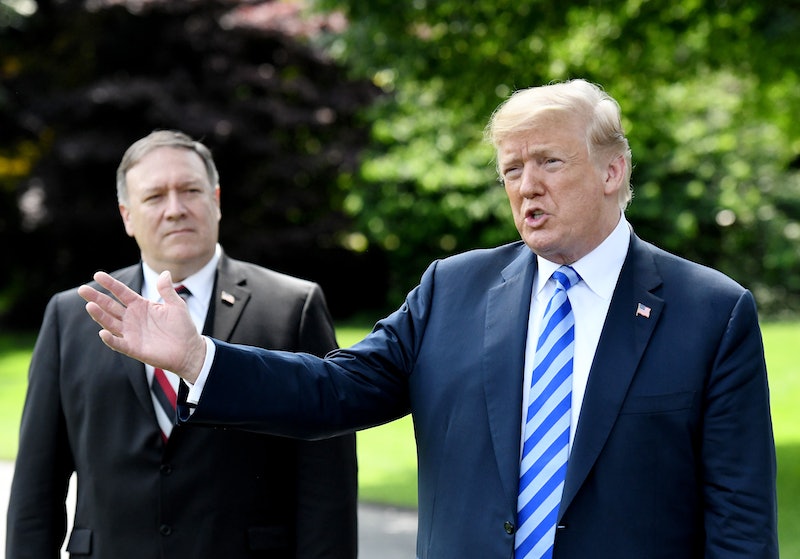 It was just a regular old Monday night when a very important Bachelorette was pre-empted by real life — the historic meeting of Donald Trump and North Korean dictator Kim Jong Un. While this is a first for both countries, it also came at a bad time for social media — during America's favorite show! These Bachelorette memes and tweets show that you should never, ever interrupt a rose ceremony. Bachelor Nation gets really upset.

According to CNN, Donald Trump and Kim Jong Un met in a historic moment in Singapore — it was the first time that a sitting U.S. president had met with a North Korean leader, and yeah — it was a big deal. Both Trump and Kim have a reputation as unpredictable leaders, and the whole world was watching with bated breath to see what would happen when they met. Couldn't the U.S. have just sent Dennis Rodman or something? Kim loves American basketball!

Most Were Just Really Mad

Hell hath no fury like a Bachelor fan scorned.

Plenty Parlayed It Into A Bachelor Joke

I bet that Kim does get a rose after all.

Quite A Few Heard A Mispronuncation By The Korean Interpreter

A Few Wanted To Go Out Watching The Bachelorette

Even Bachelor Nation Joined In

Because who is as amped about The Bachelorette as people already from the franchise?

George Stephanopoulos didn't stay long on our televisions — after maybe 10 minutes of Trump/Kim talk and watching two grown men shake each other's hands, viewers were blessedly brought back to The Bachelorette. And fans didn't miss anything, either — the producers of The Bachelorette knew that this was going to happen, and they made it so that the episode would play in its entirety following the footage of the summit.

And if you missed some things, the episode was cleanly split in two — the first half was spent mostly on Tia talking to Becca about Colton and how they dated before he got on The Bachelorette. Did he want the Bachelorette to be Tia? It's possible, Tia says, but Becca gave him a group date rose anyway. David and Jordan fought, and Jordan bragged about how he's had 4,000 matches on Tinder. Is that a record or something? Why would you brag about being so alone that 4,000 women have said "yes" to you on a phone screen and yet none of them have actually committed to you in real life? Then, David fell out of bed and smashed his face into the ground, prompting a trip to the emergency room and a very serious Chris Harrison visiting Becca and making it seem like someone had punched David's lights out. Oh, Chris — never change.

In fact, it's this never-changing formula to The Bachelorette that makes it so easy to interrupt — we know where the drama lies, so even if there are more historic summits and meetings between world leaders, it's easy to jump back into it. If Bachelor fans will let you, that is.