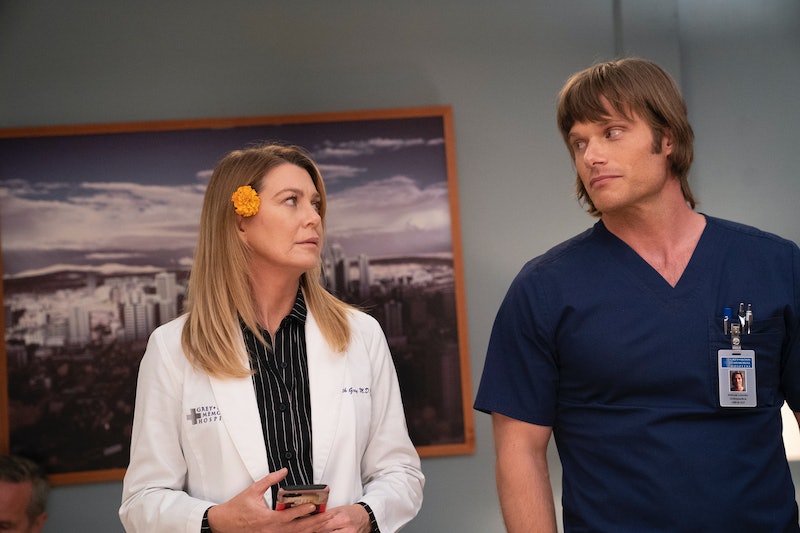 At its core, Grey's Anatomy has always been a show about Meredith, and that concept still remains true to this day. In fact, a majority of Season 15 has been dedicated to finding her a new love interest and the list of contenders has been pretty extensive. (She is quite the catch, after all.) However, showrunner Krista Vernoff has recently shared details about Meredith's love life on Grey's Anatomy with TVLine that will make you all the more eager for this winter hiatus to be over with already. Because, according to Vernoff, the list of Mer's suitors that may ultimately win her heart can now be narrowed down to just two people: DeLuca (Giacomo Gianniotti) and newcomer Link (Chris Carmack).

"Her dating adventure has boiled down to [that] triangle," Vernoff revealed to TVLine during an exclusive interview. "I can't reveal more than that." Given the numerous men who have made their interest in Meredith known, it's interesting to now know that it'll all come down to these two guys. But who will she end up choosing in the long run? At the end of the fall finale, Meredith found herself stuck in an elevator with DeLuca, which could be viewed as an advantage to some fans who have learned all too well the type of sexual tension that can take place behind those sliding steel doors.

That being said, Vernoff warns that while both Meredith and DeLuca will emerge from that enclosed space "with a deeper understanding of each other," fans shouldn't rule Link out just yet. "In Episode 10, Meredith will get to know Link better," Vernoff teased to the outlet. "She gets to know DeLuca better in [Episode 9, the midseason premiere, which airs on Jan. 17], and she gets to know Link better in 10." So each suitor will get his chance to shine, but it will ultimately be up to Mer as to who is more worthy of winning her over.

"And if life experience is code for age, then I would ask those viewers to look at the double standard. Because they never questioned Meredith for Derek even though there was an age difference."

At this point, it looks like either guy has a shot of becoming Meredith's special someone. She's clearly attracted to both of them, so it's just a matter of who proves to be most compatible. Meredith and Derek will always share an epic love, but it's good to see Meredith finally moving on a in real way. She deserves to find love again, and according to these new details, it won't be long now until she finds it.