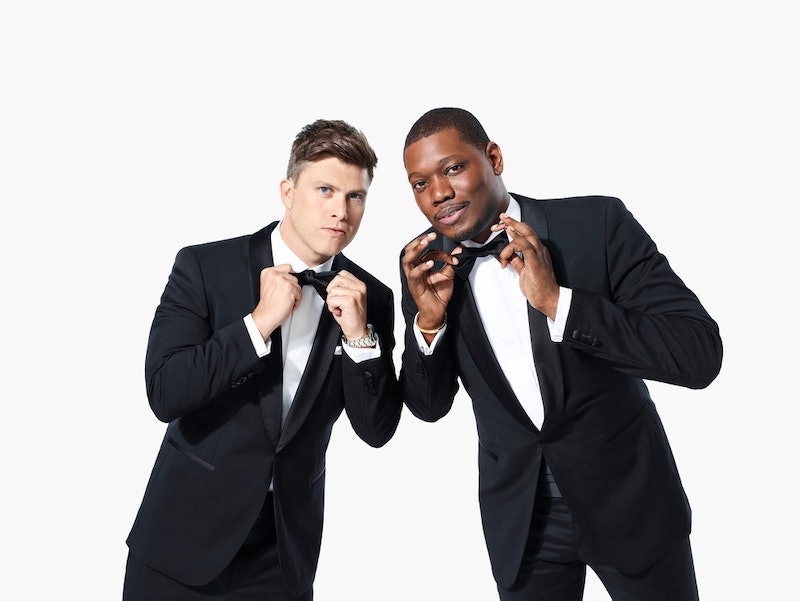 Michael Che and Colin Jost are hosting the 2018 Emmy Awards, and, though it's their first time hosting a major awards show, the Saturday Night Live head writers are certainly up to the task. Che and Jost are best known as the hosts of Weekend Update, which means that a lot of fans are going to be expecting things to get political, and that means a few jokes at the president's expense. Michael Che and Colin Jost's political jokes at the 2018 Emmys didn't come as a surprise, but what was surprising was how little they actually mentioned President Trump by name.

Leading up to the Emmy Awards, Che and Jost were noncommittal whenever they were asked about how politics would fit into the show. They joked about being political in their very first promo for the 70th Emmy Awards released in August, suggesting that they won't be as political as some might think they will be. And on Friday, Sept. 14, in an interview with the Associated Press, Jost admitted they weren't sure how the show would play out. "We don't totally know yet because we don't even know what's going to happen over the weekend politically. There might be some, and there might not," said Jost. Che added, "There's gonna be political jokes. And we're gonna come out on the wrong side of history, for sure. We're aiming toward it."

And, boy, did they deliver. Granted, it doesn't seem like Che or Jost will end up "on the wrong side of history," at least not for their political jokes.

In their opening monologue, Che and Jost looked back at the first Primetime Emmy Awards, which took place in 1941. "Things were different back then," Jost lamented, citing the cheaper price of gas and houses, before adding, "And we all agreed Nazis were bad." The line was, of course, a reference to Trump's comments post-Charlottesville, in which he seemed to defend white supremacists marching in the "Unite the Right" rally.

Jost and Che took a dig at Trump's reality television fame, noting President Barack Obama and Michelle Obama's new contract with Netflix, saying, "The Obamas have their own production deal at Netflix. My dream is that the only thing they produce is a better version of The Apprentice, but has better ratings."

Sure, it wasn't quite a joke, but Michael Che's "Reparations Emmys" skit in which he highlighted the many actors of color throughout the years who never won television's highest honor offered a few laughs at the expense of The Emmys' (and Hollywood's) diversity problem.

While Che and Jost mostly stayed away from jokes relating to Hollywood's ongoing reckoning with gender politics, sexual misconduct, and the #MeToo movement, they did slip in one reference to Ronan Farrow's dogged reporting unearthing sexual misconduct in the industry: "Netflix has the most nominations tonight," Che and Jost began, "and if you’re a network executive, that’s the scariest thing you could possibly hear except maybe ‘Sir, Ronan Farrow is on line one.’ You don’t want that call.” Indeed.

These jokes certainly made quite an impact at the Emmys.

More like this
How Lady Gaga & Adele Are Closer To The EGOT All Of A Sudden
By Jake Viswanath
A Political Thriller Inspired By The Munich Massacre Is Coming Soon
By Darshita Goyal
It’s Official: 'The Bachelorette' Is No Longer A Fairy Tale
By Samantha Allen
Why Eurovision 2023's Host City Won’t Be Revealed For A While Yet
By Sam Ramsden and Rachel Mantock
Get Even More From Bustle — Sign Up For The Newsletter