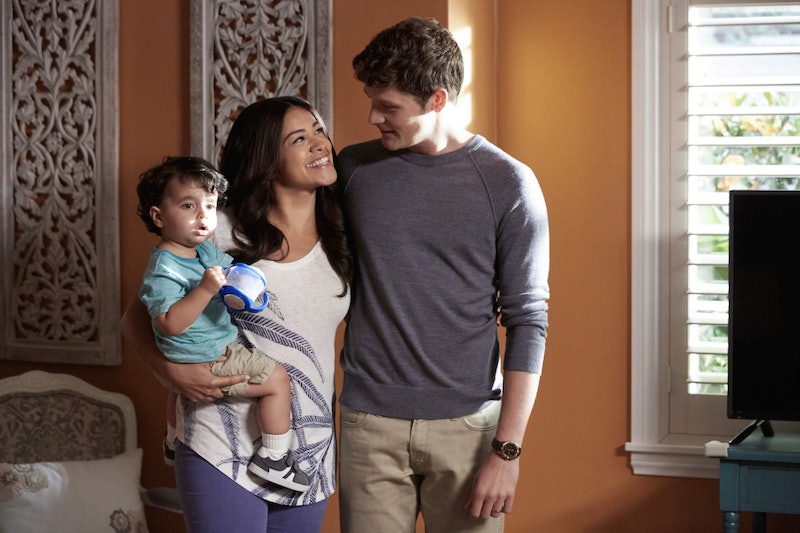 Spoilers ahead for Jane The Virgin. After the Feb. 6 episode of the CW series, fans are likely still processing Michael's death on Jane The Virgin. Yes, even though it's hard to type, the former Detective Cordero has officially died. But in an interview with Bustle, actor Brett Dier reveals how Michael could live on in future episodes of Jane The Virgin.

Don't worry — it's not exactly wishful thinking. Showrunner Jennie Snyder Urman already told The Hollywood Reporter that this isn't the last we'll see of Michael. Dier doesn't know how that will play out specifically, but he has an intriguing idea. "I think [Michael will] mostly just be in the fantasy world of Jane's mind," he says. "It's going to be more fantasy things, because Michael is definitely dead. I don't think it's a crazy twist or his body is hidden or something."

As for how the other characters will cope, Dier realizes that it will certainly shake things up for all involved. "I definitely think it's a new chapter in someone's life — in all those characters lives — to have someone disappear like that," he says. In fact, he even believes it will change Jane The Virgin's focus.

"The show is just going to focus on different relationships now. And maybe Jane's dating life," Dier hypothesizes. "Rogelio is going to have to find another best friend. Or maybe he'll go crazy and he'll start talking to me in his head. I hope so." Personally, I find that last idea simultaneously brilliant and devastating. After all, Rogelio and Michael had a serious bromance.

But it's that comment about Jane's love life that should really pique fans' interest — it wasn't too long ago that Michael, Jane, and Rafael were in a love triangle. Does Michael's death means that the other two will back in love? "I don't know 100 percent about that, but I do think, I don't see her being single until the show ends," Dier says about Jane. "There's definitely going to be another romantic thing happening, whether it's with Rafael or someone who's not even cast on the show yet."

Making things all the more intriguing, the actor adds, "There's definitely going to be more romance and possibly another triangle between other people."

Still, no matter what new characters join the cast, Michael (or at least the non-flashback, fantasy version of him) will be dearly missed — both by fans and the actor himself. "I don't know how to explain it, but I loved everything about it," Dier says of playing Michael. "It's an amazing journey."