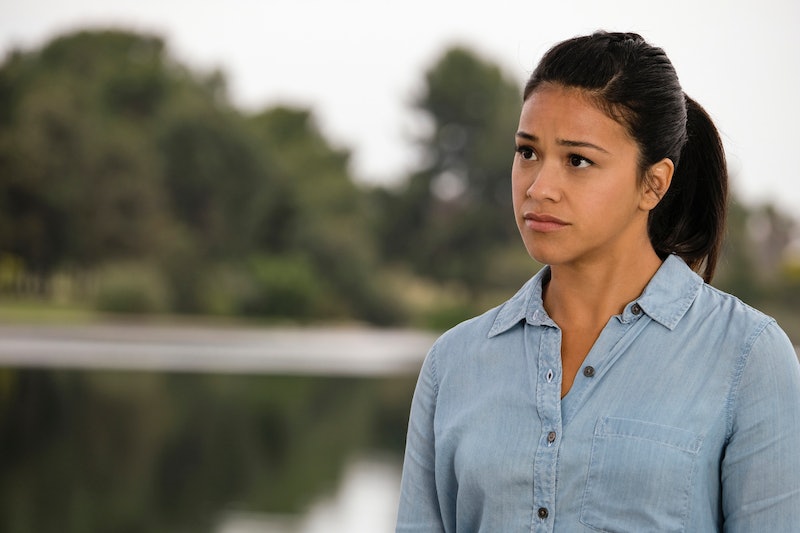 Spoilers ahead for Jane the Virgin Season 5, Episode 3. Just as Jane is ready to get her life back to normal, Jane the Virgin delivers another major (though, to be fair, expected) twist. Michael gets his memory back on Jane the Virgin at the end of "Chapter 84." Jason's attempts to woo Jane throughout the episode failed, but all of that is about to change now that Jason/Michael actually remembers their love story. Since Jane already mourned Michael, she was all set to let go of cowboy Jason, who — besides actually being him — doesn't share much similarities to her long-lost husband. But now that Jason is one ginormous step closer to being the Michael that Jane loved, she's going to have to decide between Rafael and Michael for the umpteenth — but final — time on Jane the Virgin.

Although Jason's appearance wreaked emotional havoc on Jane in the Season 5 premiere, she's actually become rather annoyed by his presence. On the advice of her sister-in-spirit Petra, Jane decides it's time to let Michael go to refocus on her life with Rafael and Mateo. Yet, when Jason delivers the divorce papers to Jane at Alba's house and says goodbye, something rather magical happens. The fishing rod he had gifted to Jane hits the ceiling and causes damage to the roof in the entryway.

Just like part of the ceiling had fallen on Jane and Michael when they first kissed during her 21st birthday, part of the ceiling falls on Michael and he gets flashbacks of his life with Jane. And this rush of memories will leave Jane the Virgin fans in an emotional puddle on the floor like a pile of melted snow in Miami.

Even though they live in Florida, a theme of Jane and Michael's relationship has been snow falling — thus, the name of Jane's book. So it's oh-so perfect for their epic romance that "snow" courtesy of Alba's ceiling is what triggers his memory. (And thankfully, there was no accidental gun shooting this time around.) While you might have just been basking in the glow of Jane and Rafael talking about adopting a child, Michael's memory returning is a jarring reminder of all of the moments that made his love story with Jane so special and genuine.

Unfortunately, Jane didn't prepare for the inevitability of Jason returning to his Michael form, and it's put her in an especially rough spot when it comes to her love life. So while Jane was able to close the door on Jason, can she really say goodbye to Michael now that he's really, truly back in her life?

Jane admits to Petra that touching Jason was like touching a stranger and she didn't feel any spark between them during their fishing date. But her heart glowing for a Jason who remembers Michael's love for her seems very possible.

So Jane is stuck deciding between two men she loves all over again. And while she might very well pick Rafael for the final time, get ready for a heartbreaking journey as Jane the Virgin heads toward a dramatic and romantic series finale befitting a telenovela.

More like this
How Is The British Royal Family Related To The Romanovs?
By Karen Fratti
Netflix Bumped Up The 'You' Season 4 Premiere Date — Here's What To Expect
By Bustle Editors
'Blue Story' Fans Will Recognise 'The Confessions Of Frannie Langton’s Karla-Simone Spence
By Maxine Harrison
'Bridgerton' Fans Will Love ITV’s 'The Confessions of Frannie Langton'
By Maxine Harrison
Get Even More From Bustle — Sign Up For The Newsletter