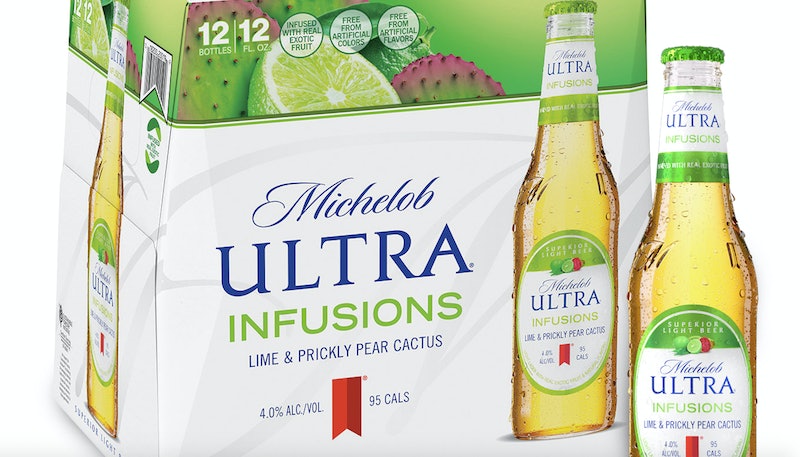 Say farewell to hot chocolate and hello to a crisp, cool beer. Winter is officially in the past and warmer weather is finally promising to stick around for good. With the change in season also comes a turn in refreshments, so right about now would be a solid time to make room in the fridge for Michelob ULTRA's new Infusions. With a new twist on flavor you wouldn't expect, this new beer is set to be ~the~ sip of summer.

Michelob ULTRA is a light beer with an alcohol content of 4.2 percent per 12-oz serving. It's the perfect bottle to lounge on the patio with once 5 p.m. rolls around and the sun is lingering for a few hours longer. Joining the line up of classic Michelob ULTRA flavors is the new Lime and Prickly Pear Cactus. And this sounds like summer in a bottle to me.

This exciting flavor that gives the light beer a little something-something is the first in a new line of Infusions from Michelob ULTRA. And if this is how the Infusions line is kicking off, I can't wait to see what else is in store for my beach side cooler.

The Lime and Prickly Pear Cactus flavor is now available at your local beer and liquor store in both cans and bottles. And, it goes without saying, but, you must be 21 years of age or older to enjoy this spirited bottle of beer.

If you're puzzled by the thought of drinking a cactus, don't worry, there's nothing prickly about this sip. You might be able to find the cactus pear, otherwise referred to as a prickly pear in the produce aisle of your grocery store. Farmer's Almanac describes the flavor as "sweet" and "similar in flavor to a melon." Sounds perfectly in tune with the taste of summer to me.

The Lime and Prickly Pear Cactus beer isn't the only fruity flavor that'll take up space in your cooler this summer. Spritzer style beverages with a hint of fruit are all the rage. The line up in your cooler might also include a lip licking Pearsecco from Crispin Cider Co., or perhaps a Stella Artois spritzer made of crisp apples and hibiscus. Even Natural Light is taking a fruity turn with their Strawberry Lemonade beer. It's kind of like your beverage cooler has become a fruit basket.

If you're still not convinced on the idea of prickly pear, Michelob ULTRA has other light beers that will have you sighing with relief after a sip. Perhaps you're familiar with the Michelob ULTRA Pure Gold Organic Pale Lager. It's the Zoe Kravitz ASMR beer we were all treated to during the 2019 Super Bowl Commercial breaks. Basically, if an infused beer won't do the trick then perhaps something organic that'll remind you of ASMR will.

We are finally at that point in the calendar year where our fridges welcome bottles of beer. Hot chocolate will have to wait its turn until next year. The Lime and Prickly Pear Infusion beer is here and I'm ULTRA excited about it.