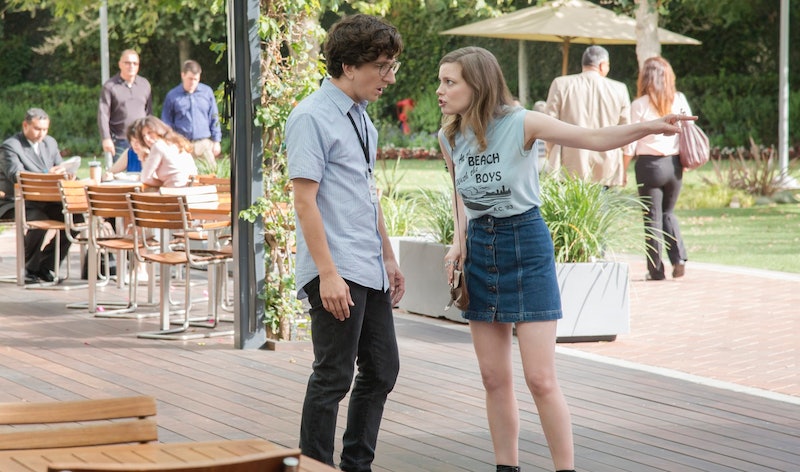 When I was growing up, I remember feeling envious of the women I saw on television. To me, they had perfect skin and perfect bodies and perfect boyfriends. They had problems, but only the kind that could be resolved by the end of a 30-minute sitcom, and never without a happy ending. As I've gotten older, there's been a meaningful push for more complex female characters on-screen, and for the most part, it's been successful. But there seems to exist a lingering misconception that female role models should be perfect, and that's why Love Season 2 seems so revelatory. Mickey isn't an aspirational role model, she's a real one.

To be clear, Love is far from the first show to subvert gender stereotypes. There was, for example, the fiercely independent Mary Richards on The Mary Tyler Moore Show, and the refreshingly sex-positive Samantha Jones from Sex and the City. But there's something powerful to be said about the way Mickey is simultaneously confident, in control, and a giant f*cking mess. She's complicated and flawed and often selfish, but she's also strong as hell.

Part of Love's initial mastery was that even though it was framed around the dysfunctional courtship between Mickey and Gus, it did well to give its characters room to breathe, to be apart — even if they spent the bulk of that time floundering. But in Season 2, that space lets Mickey blossom.

After coming to grips with her addiction, she recommits to staying sober and takes impressive ownership of her life. She knows what she wants. She doesn't take anyone's sh*t. She maintains a stable job, and she's damn good at it.

Though she initially says she wants to be alone, she eventually strikes up a relationship with Gus. At first, it seems Love might be falling into the well-worn trope of a troubled girl in need of a man to save her, but Mickey doesn't rely on Gus to "fix her." Instead, she makes clear that she's perfectly capable of fighting her own battles, and while his support is well-intentioned, she doesn't really need it.

By the end of Season 2, Love is no longer about Gus and Mickey's less-than-storybook romance. It's about Mickey embracing who she is, pulling her life together for no one but herself, and finding happiness in a relationship without letting it define her. Here, Mickey isn't some Manic Pixie Dream Girl meant to reinvigorate the life of a boring nice guy, it's the opposite. Love Season 2 is Mickey's story; Gus is just along for the ride.

Of course, Mickey isn't perfect, but no woman is, and on Love, she shows that accepting your shortcomings is so much more empowering than trying to change them. She makes mistakes, she doesn't have everything figured out, and sure, she's a little emotionally stunted, but she doesn't make any apologies for who she is. And in that, Mickey becomes the kind of role model TV has always needed — or at least, the kind I've always wanted.