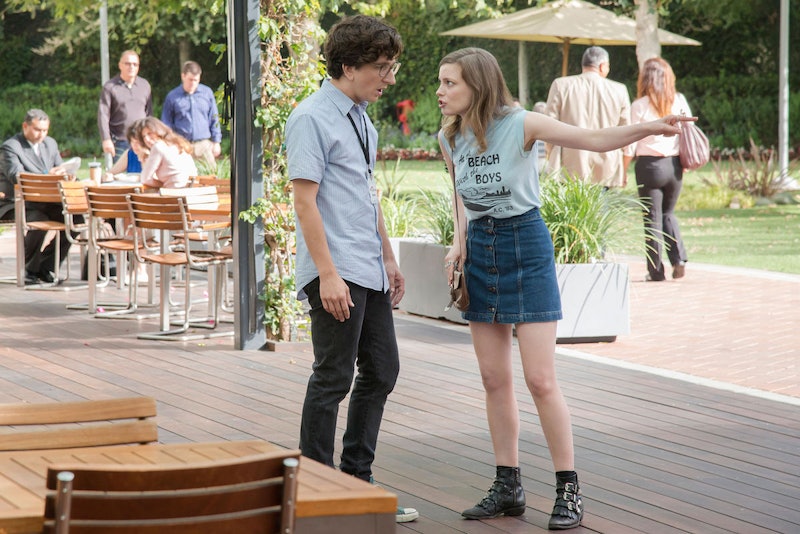 I think all fans can agree that Netflix's Love, produced by Judd Apatow, and starring, Gillian Jacobs, and Paul Rust, elicited an array of feelings over its 10-episode span. But very little (if any) of those feelings would be considered endearment. As a romantic comedy that isn't particularly romantic or in the end, comedic, Love somehow managed to escape the trappings of its own genre. Sure, it’s called “love,” but, for most of the season, its characters can barely muster up the courage to “like" anything in this world, let alone each other. For those relishing in the antithetical "relationship" between Gus and Mickey, prepare for more indefatigable ups and downs, as the second season of Netflix's Love will be released on March 10, 2017.

If you came across Love hoping to find a sweet, charming show that catalogues the hardships of dating in this day and age, you were either disappointed by the tragic direction the show took itself in or surprised by how much you enjoyed watching the characters try to keep their heads above water. If you fall into the second category, you'll be delighted to see that, by the looks of Season 2's promo, the love lives in Love appear to be more of the same. In other words, they're still bent on being defiant, atypical, and, yes, unromantic.

The teaser showcases a highlight reel of what's to come for Gus and Mickey. They catch eyes from across a crowded diner. They spastically dance in a living room. They get yelled at and stared at and in trouble with the law. At the end, they kiss, but, as Season 1 so painstakingly hammered into our heads, this means nothing. These people are not good for each other. Like, at all. For once, both the audience and the two leads know this, and yet both the audience and the two leads have gladly bought front row tickets to watch it burst into inevitable flames.

As a refresher, Jacobs stars as the heroine, Mickey. By way of over-used Hollywood cliches, she’s your typical mess. She’s sober (sort of, and when she wants to be), she always finds herself in terrible relationships, she’s self destructive (which at times is hardly palatable), and, when it comes to romance, she’s a nomad — unsettled and unclear about what might be good for her.

Rust follows alongside as the irritating antithesis to Mickey. Gus is a private teacher for a teen star and aspiring writer. He considers himself “a nice guy” and, for most of the series, he weaves in and out of the trope. As Gus tries to build himself up as "nice," Love has no problem tearing him down.

Therein lies the rub. Gus isn’t just nice and Mickey isn’t just a mess. But that’s how they perceive themselves and each other, and, for a while, that's how we are conditioned to perceive them. Until Love Season 1 revises those stereotypes for us, leaving us in a state of hard-to-swallow disorientation.

Season 1 ends right where it begins (the episode's rightfully titled "The End of the Beginning"), because, sometimes, that's exactly what romantic pursuits boil down to. Endless cycles of ends and beginnings and lots and lots of middle parts that run long and tedious and make no sense. (Love does the latter nearly perfectly, giving its two leads breathing room to explore plots and developments that have nothing to do with each other.) The lasting effect might be hard to swallow and disorienting to witness on screen, but at least it's honest.

For a show that not-so-subtly hints how downright terrible the leads are for each other, the stakes of Season 2's emotional turmoil are high and perilous. Whether or not Gus and Mickey will end up saving themselves or drowning in love will be the most likable part of watching it all unfold.