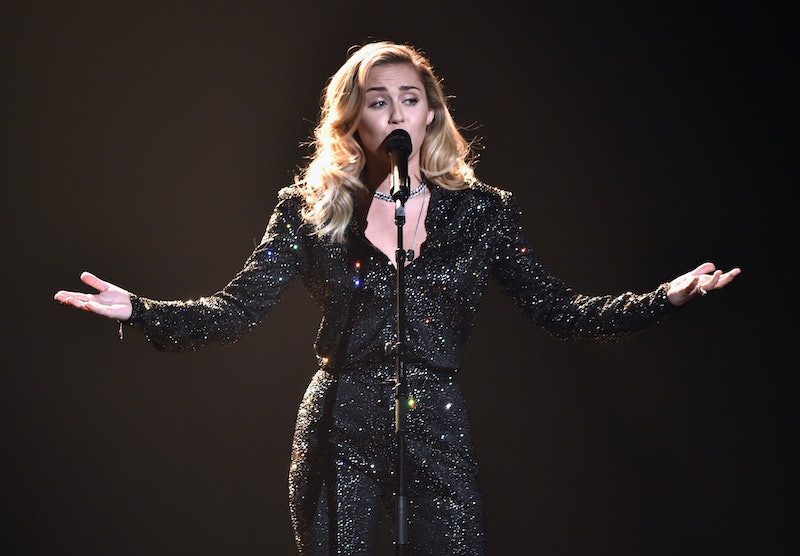 Next time you consider making a YouTube video about Miley Cyrus, be prepared for the singer to pop up in your comments section. In response to a video by Kenya Wilson — titled "Miley Cyrus Is My Problematic Fav ... Sorry" — Cyrus apologized for the controversial comments about the hip hop community she made in a May 2017 Billboard interview.

In her video, Wilson called out Cyrus for doing "some very racially insensitive things as far as culturally appropriation" and specifically mentioned Cyrus' comments about distancing herself from hip hop. In the Billboard cover story, which was released just before her album, Younger Now, Cyrus explained that despite being heavily influenced by hip hop while making Bangerz, she no longer felt connected to the rap scene. "I also love that new Kendrick [Lamar] song [“Humble”] ... I love that because it’s not 'Come sit on my d*ck, suck on my c*ck.' I can’t listen to that anymore," Cyrus told the outlet. "That’s what pushed me out of the hip-hop scene a little. It was too much 'Lamborghini, got my Rolex, got a girl on my c*ck' — I am so not that."

Wilson criticized those comments in her video, published May 31, noting that her explanation was "racially insensitive" and "wasn't okay." And, to her surprise, Cyrus responded and apologized for that interview in the comments section, explaining that what she said to Billboard was indeed "insensitive."

"Just watched your video. Thank you for giving me this opportunity to speak up. Being silent is not like me at all," Cyrus began her comment on Wilson's video, which she posted on Tuesday, June 11. "I am aware of my platform and have always used it the best way I know how and to shine a light on injustice. I want to start with saying I am sorry."

The singer continued, "I own the fact that saying ... 'this pushed me out of the hip hop scene a little' was insensitive as it is a privilege to have the ability to dip in and out of 'the scene.' There are decades of inequality that I am aware of, but still have alot [sic] learn about." In addition to apologizing for not recognizing the "privilege" of her comments, Cyrus also explained that she decided to finally speak up about this topic because "silence is part of the problem."

"I can not change what I said at that time, but I can say I am deeply sorry for the disconnect my words caused," Cyrus added. "Simply said ; i f*cked up and I sincerely apologize. I’m committed to using my voice for healing, change, and standing up for what’s right."

In addition to apologizing for her negative comments about hip hop culture, Cyrus has continued to work with many of the rappers and producers that she collaborated with on Bangerz, including Mike WiLL Made-It, on her recent music. "There’s psychedelic elements, there’s pop elements, there’s more hip-hop-leaning records," Cyrus told Vanity Fair about the inspiration for her upcoming, three-part album She Is: Miley Cyrus. "You know, in the same way I like to kind of just be genderless, I like feeling genre-less."

Considering the fact that Cyrus has continued to include hip hop influences in her music, and her outspoken advocacy for social justice, it's not surprising that the singer regrets speaking so insensitively back in 2017. In addition to recognizing her privilege and owning up to her mistakes, it seems as if Cyrus is really committed to being the uniting force amongst fans that she has wanted to be.