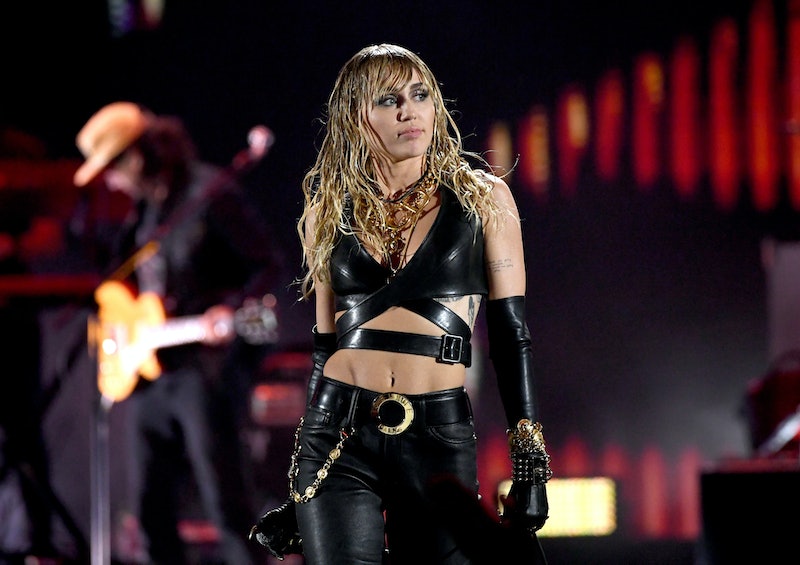 Lil Nas X's breakout 2019 single just got another Cyrus-family remix. Miley Cyrus performed "Old Town Road" with boyfriend Cody Simpson and her dad Billy Ray Cyrus, as seen in an Instagram video she posted on Friday, Dec. 13. The low-key jam session was part of a Los Angeles holiday gathering for Miley's Happy Hippie Foundation where the two special men in the singer's life both strummed guitars and sang along in an acoustic version of the hit Billy Ray collaborated on with Lil Nas X. (In case you were wondering, Lil Nas X gave his stamp of approval, adding two "smiling face with hearts" emojis in the post's comments section.)

The performance was particularly notable in that it seems to be the first time fans have heard Miley sing since September, by People's calculation. The Grammy nominee first underwent surgery for tonsillitis in October, before requiring a separate vocal cord procedure early the following month. As a result, a doctor recommended several weeks of vocal rest, leaving Miley no choice but to take a break from singing and put her forthcoming album on hold.

The trio also got into the holiday spirit with a rendition of "Silent Night," joined by Miley' sister Noah and mom Tish Cyrus, as well as a clarinet-playing youth and mini chorus of teens. Miley gushed in her IG caption of the video that she's "always blown away by the young people" she meets at homeless youth resource center My Friend's Place, where the event was held. "There is always so much love and talent," the musician wrote, also thanking "everyone who joined us in celebrating this special time of year.

In their own Dec. 13 Instagram post, My Friend's Place thanked the Cyrus family and Simpson for "bringing some extra cheer" to the "the most amazing day." The charitable organization also noted that singer Halsey joined Happy Hippie Foundation as a partner in "making the day possible."

Simpson's role at the holiday party wasn't exclusive to singing. Miley also shared an IG video in which he can be seen manning a table of T-shirts emblazoned with the logo of her foundation, which says its mission is "to rally young people to fight injustice facing homeless youth, LGBTQ youth and other vulnerable populations."

His shows of support seem to be in line with how he's approached the relationship, which began around early October. That seemed to be particularly evident during Miley's recovery from vocal cord surgery when the "Pretty Brown Eyes" singer reportedly provided her with constant company. At the time, a source told People that Simpson was "by her side" and making sure his girlfriend "isn't bored while she recovers." The magazine's insider added that Miley "seems very happy" and that the pair is "still doing well."

Their latest performances together seem to indicate that very much remains the case.

More like this
Who Is Camila Cabello Dating? She's Getting Cozy With Lox Club CEO Austin Kevitch
By Radhika Menon
Kanye West Has The Most Kanye Reaction To Kim Kardashian & Pete Davidson's Split
By Jake Viswanath
Selena + Chef Season 4 Was Filmed At Hannah Montana's Old Malibu House
By Jake Viswanath
Leona Lewis & Husband Dennis Jauch Welcomed Their First Child
By Darshita Goyal
Get Even More From Bustle — Sign Up For The Newsletter