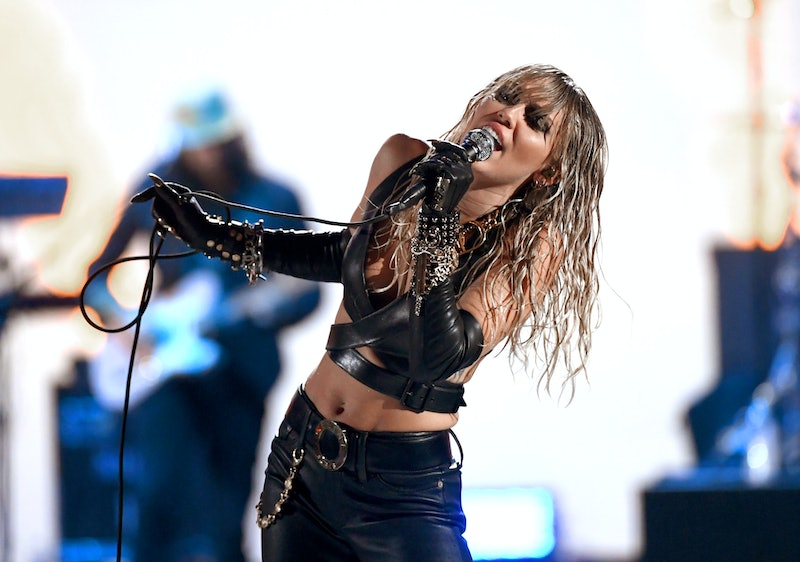 In case you didn't already know (which seems unlikely), Miley Cyrus has a lot of tattoos. Shocking, right? OK, not really, but the star did just add a new piece of ink to her collection, and no, it's not the one she just got with boyfriend Cody Simpson.

On Oct. 16, Cyrus posted an Instagram photo showing a new neck tattoo that reads, "'92." The singer captioned the image, "YEAR OF THE MONKEY" with, obviously, a monkey emoji coming after it. While Cyrus didn't reveal the meaning of the new ink, it's fairly obvious. The "Don't Call Me Angel" singer was born back in 1992, and according to the Chinese Zodiac, that year was also the year of the monkey.

The numeral piece joins the several other tiny tattoos that Cyrus has, and it marks the second piece of new ink she's gotten in the last 24 hours. Cyrus and her boyfriend Cody Simpson got tandem — though not matching — tattoos on seemingly the same evening that Cyrus received this '92 ink. Her first tattoo featured an illustrated heart with a dagger piercing it through the top. Across the illustration, tattoo artist Nico Bassill added a banner that reads, "Rock N Roll Heart Forever."

While Cyrus' initial tattoo was a larger piece, the '92 is much more in line with many of her previous pieces. The singer's tattoos feature everything from food to her pets, but one thing many of them have in common are their small size.

Most recently (not including the much large Italian-inspired piece she got from Dr. Woo), Cyrus added two tiny tats before her MTV Video Music Awards appearance. According to Allure, the singer added four lines of lyrics from the Pixies' song "The Thing" to her bicep and the year 1961 onto her left hand.

Cyrus is far from the only celebrity who loves a tiny tat, though. In fact, the smaller the ink the better for some celebrities. Like her, Kylie Jenner has a number of small tattoos including everything from an ultra-tiny red heart on her arm to the "LA" written on her ankle. Altogether, Jenner reportedly has seven tattoos in all, you'd just never be able to tell due to their size.

Jenner and Cyrus' friend Ariana Grande can say the same. While Cyrus' fellow "Don't Call Me Angel" singer has larger pieces, she has several tiny tattoos including everything from Harry Potter-themed ink to her infamous "7 Rings" tattoo.

Sure, Cyrus may have a myriad of tattoos in different sizes, but she, along with the rest of young Hollywood, certainly seem to have an affinity for tiny tats.