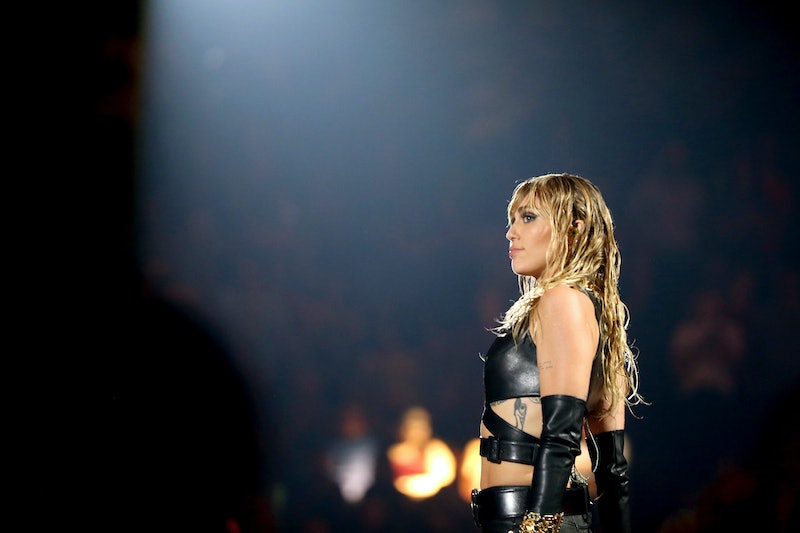 In case you've missed the past week of celebrity dating news, surprise! Miley Cyrus and Cody Simpson are Instagram official. The new couple has been showing a heaping portion of PDA on Insta, and now, they've taken things a step further by getting tattoos together. While they aren't matching, this is still a BFD for the new pair.

According to People, Cyrus and Simpson visited tattoo studio Among The Willows in Los Angeles where artist Nico Bassill gave them the new ink. Slides posted to Bassill's Instagram story on Tuesday featured close up videos of the tattoos.

Cyrus opted for an illustrated heart (not an anatomically correct kind) with a knife piercing it from the top. Across the front of the drawing, Bassill added a banner with the phrase, "Rock N Roll Heart Forever." As for Simpson, he received the face of a skull with the Grim Reaper's scythe in the background. While Simpson didn't showcase his new tattoo in social media, Cyrus did take to her Instagram to give her fans a look at the tattoo and thank Bassill for his work.

Both Cyrus and Simpson have a multitude of tattoos, so their decision to get ink together shouldn't come as much of a surprise to fans.

Of course, the pair are far from the only celebrity couple to get inked either together or in honor of each other. Justin Bieber has been rocking a face tattoo in honor of his wife, Hailey Baldwin, since November 2018. Prior to her wedding, Baldwin added the letter "B" in script to the top of her hand (alongside a plethora of other symbols).

While Cyrus and Simpson have now gotten ink together and Bieber and Baldwin have tattoos for one another, there's a couple that still takes the cake when it comes to getting new pieces added together: Ariana Grande and Pete Davidson.

While the pair broke up in October of last year, prior to ending their relationship, they'd been in and out of tattoo parlors multiple times. From Grande's tattoo in honor of Davidson's late father to Davidson's now-covered bunny mask piece a la Grande's Dangerous Woman, the pair are still the reigning champions of couples' ink.

Given the number of tattoos both Cyrus and Simpson already have, though, the new couple could just end up giving Grande and Davidson a run for their money.

More like this
Meet Foreverist, The Skin Care Brand That Keeps Tattoos Looking Fresh
By Audrey Noble
This K-Beauty “Wrinkle Bounce” Stick Is Going Viral On TikTok
By Destiny Knight
Kendall Jenner's Cowboy Boot Tattoo Is The Cutest Micro-Ink
By Sophia Moore
Juvéderm Is Launching An FDA-Approved Jawline Filler
By Brittany Leitner
Get Even More From Bustle — Sign Up For The Newsletter