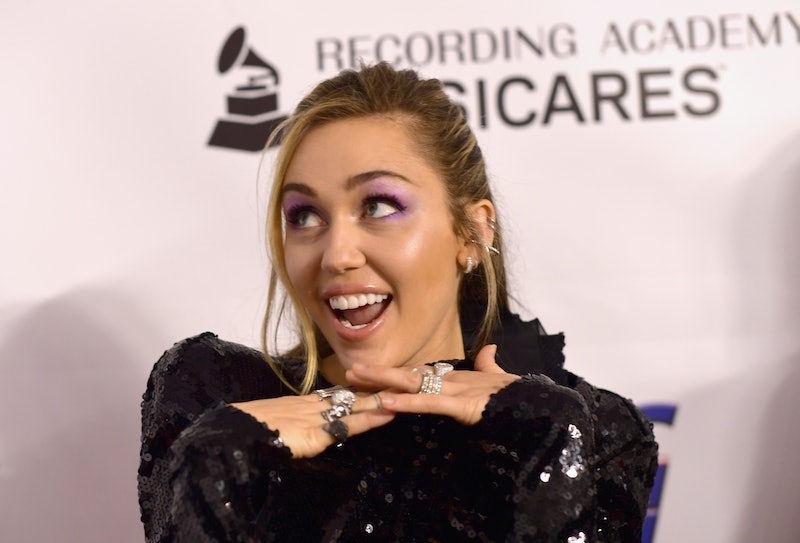 She's just being Miley — and in this case, "being Miley" means stealing the show at the Grammy Awards. Miley Cyrus performed at the 2019 Grammy Awards on Sunday, taking the stage not once, but twice during the night.

First, the singer surprised fans early on when she joined Shawn Mendes for his performance of "In My Blood," which earned rave reviews from fans (along with quite a few tweets expressing jealousy over their adorable friendship). Even Chrissy Teigen herself couldn't help but gush over the singer's cameo, joking that she was upset that she couldn't see the performance in person. "Miley!! honestly every performance really great of course we didn’t f*cking go this year," Teigen wrote.

Later, Cyrus was part of a star-studded tribute to Dolly Parton, singing "Jolene" alongside the famed country superstar — who just so happens to be Cyrus' godmother — and fans couldn't get over Cyrus' voice and her sweet relationship with Parton. "Hey here's a little secret: @DollyParton is a phenomenal singer. Her songs, like Joni Mitchell's songs, are really HARD to sing well," music critic Ann Powers tweeted, adding that Cyrus was "one person who can sing a #Dolly song."

Of course, Cyrus's performances at Sunday night's show were far from the only time she took the stage over Grammy weekend. On Friday, Feb. 8, she once again recruited Mendes to sing a version of Parton's iconic duet with Kenny Loggins, "Islands in the Stream," alongside Mark Ronson on guitar, when Parton was honored as the Recording Academy's MusiCares Person of the Year. The night also featured tributes from artists like Katy Perry and Kacey Musgraves.

Cyrus recruited Mendes for the duet, she told Variety, by sending him a DM that praised his talent. "I actually sent him a DM and said 'I don’t know what you’re trying to do next,' because I’ve actually been in his position in his career too before," she said to the outlet. "Where you’re someone who I think is trying to fit into pop music and you want to be played on pop music but you don’t want to be conformist and you want to do your own thing." She continued, "I love the way that he always kind of plays alternative pop because it’s something that I love to do."

The "Nothing Breaks Like A Heart" singer had teased the performance earlier in the week, sharing a black-and-white snapshot of herself and Mendes during rehearsals, which she captioned with a lyric from "Islands in the Stream." Showing off their matching jackets — which featured Parton's face on the back — Cyrus wrote, "this could be the year for the real thing." Mendes shared the same photo on his own Instagram account to hint at the exciting performance.

During their duet, Cyrus made sure to express her love and adoration for Parton at multiple points, letting the audience see just how close the famous singers are. "She’s the most non-judgmental person I’ve ever [known] in the world," Cyrus gushed about Parton to PeopleTV ahead of her MusiCares performance.

And the legendary singer also had nothing but love for her goddaughter, praising her on the red carpet to People in her own interview. "I love Miley," Parton said. "We’ve done a lot of things together and it wouldn’t be right for me to be honored on a big deal like this and not have my Miley.”

In 2012, Parton told CBS that she's known Cyrus since she was a baby, explaining that she met Billy Ray Cyrus met in the '90s, at the height of his popularity with the single "Achy Breaky Heart." Parton even appeared on an episode of Hannah Montana, playing Cyrus' godmother.

A few years later, Cyrus explained to Cosmopolitan that having a country icon as a godmother has its perks; when asked what the was the best thing about her relationship to Parton, Cyrus joked, "Having access to her closet! Ha." However, she also explained that she's learned a great deal from Parton, especially, "watching the way she treats people with love and respect." She explained, "[It's] always a reminder to me and my family of what is important. Never let success change your heart."

It seems as if Cyrus truly has taken that advice to heart — and possibly picked up a few tips on how to craft a truly show stopping performance along the way.