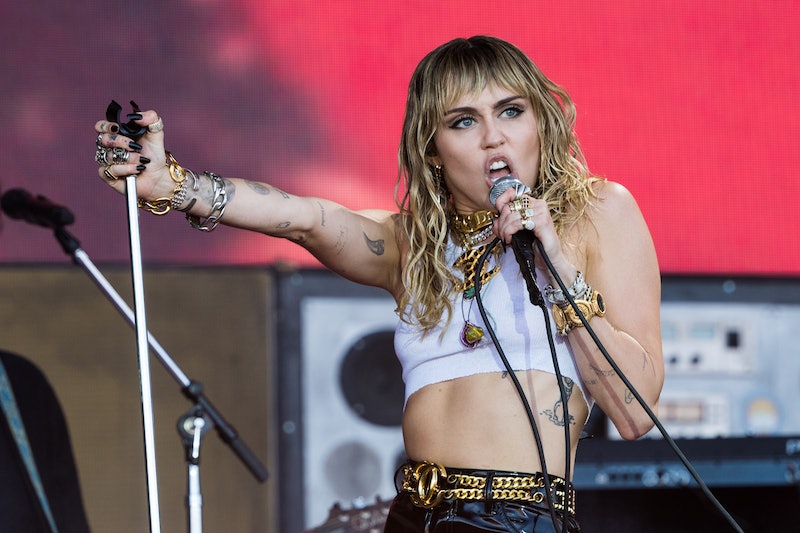 She is ... working on new music. On Monday, August 12, Miley Cyrus' studio photo teased new music on Twitter, hinting that the singer is working on another album in the wake of her split from husband Liam Hemsworth. While Cyrus didn't add a caption or provide any context to her post, she announced back in May that she is releasing two more albums over the course of the year, and her work in the studio could be part of that project. After dropping She Is Coming on May 31, Cyrus tweeted that "This is the 1st of 3 drops!" and that there will be "6 songs [on] 3 EP’s SHE IS COMING / HERE / EVERYTHING all to make up 1 album #SHEISMILEYCYRUS." According to Rolling Stone, part two, She Is Here, was originally slated for a summer release, while She Is Everything was planned to arrive in the fall or winter.

Cyrus' studio photo is one of several cryptic social media posts that the singer has shared since news of her split from Hemsworth broke on Aug. 10. A day after the announcement, Cyrus shared a series of photos from her vacation with Kaitlynn Carter and big sister Brandi, where she explained that "change is inevitable." Alongside some snaps of herself posing on top of the Dolomite mountains, Cyrus wrote on Instagram, "Don’t fight evolution, because you will never win. Like the mountain I am standing on top of , which was once under water , connected with Africa , change is inevitable."

She continued, "My dad always told me 'Nature never hurries but it is always on time'.... it fills my heart with peace and hope KNOWING that is true. I was taught to respect the planet and its process and I am committed to doing the same with my own ...."

Cyrus also shared plenty of photos from her "girls trip" with Brandi and Carter — who recently split from Brody Jenner — on Instagram, where she declared that they were having a "hot girl summer" and doing fine despite their respective breakups. According to People, Cyrus was spotted kissing Carter as well during their trip, though a source told the outlet that the pair are just "having fun together" and that they have friends in common.

Whether Cyrus is in the studio working on her upcoming albums or not, it seems as if the singer is comfortable being her unapologetic self — both on social media and in her music.