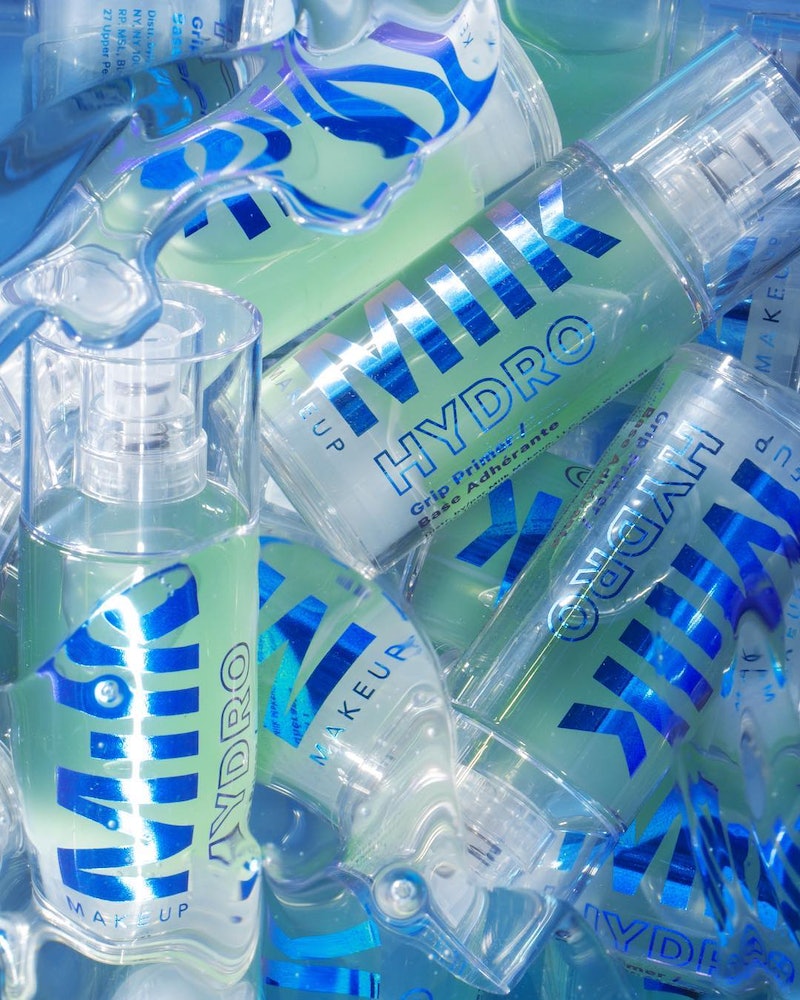 Thanks to the truly incredible number of product launches in the beauty industry, some new items can fly under the radar and not be noticed. That's not the case of Milk Makeup's Gripping Primer. The pastel green-hued makeup base is blowing up YouTube right now with reviews, and with so many beauty gurus trying out the product, it shouldn't be hard to discover whether or not this innovative good is soon to become a cult classic.

If you're not familiar with the idea of a gripping primer, one of the beauty gurus you can look to is NikkieTutorials. While Nikkie obviously didn't invent the idea that primers should be sticky, she did create the first known hack for it. The idea behind Nikkie's hack and presumably behind gripping primers in general is that your base should be tacky. This allows your makeup to adhere to your face in a way that makes your base practically budge proof. Nikkie first made this happen with Nivea aftershave. Yes, really. Soon, that trick was all over YouTube.

Now, Milk Makeup's Hydro Grip Primer is popping up. The new product comes after similar products like K-beauty's J.One Jelly Pack and CoverFx's own gripping primer. Milk Makeup, however, is the one that's got gurus talking.

According to Sephora, the product uses blue agave to create the gripping sensation, but don't worry, it's definitely not bad for your skin. The primer also features ingredients like hemp-derived cannabis seed extract to hydrate your face as well as prickly pear to help soothe.

While the product is a recent release (according to the Milk Makeup Instagram it launched March 8), that hasn't stopped reviews from racking up on Sephora's website. The product already has over 400 reviews just a little over two weeks after its launch, and those reviews had placed it at 4.3 stars with 10,000 likes on Sephora.

What do gurus have to say about the seemingly magic primer? Well, they seem to be really into the gripping product, too.

In her upload on how to get a great base, YouTube Alissa Ashley includes the new Milk Makeup primer explaining, "I like this product a lot actually...once it's kind of done setting, it has a stickiness to it, and I personally love sticky primers for my base because I just feel like the foundation sticks on to it."

While Tang's review of the primer isn't quite as glowing as some others, she does say that she likes the product. The big takeaway from Tang's review though is the idea that the new Milk Makeup primer could just be a far more affordable dupe for the ultra expensive Sisley primer.

Too Much Mouth aka Shanygne is a fan of the primer just like Alissa Ashley. In her video, she explains, "I have really been loving this primer. It is hydrating to the face. I feel like it just makes my face just glow with it on.

In her video, Glines tests out a ton of new, hyped products, and one them just happens to be the new milk primer. For her, she explains that the primer definitely lived up to her expectations and she could tell a difference in her makeup throughout the day.

This is actually not Davison's first time using the Milk Makeup primer. She has a previous video where she tried the product out as well. In this upload, however, Davison explains that she's been really enjoying the primer and uses it was a thicker foundation than she did before.

If you want to try the product for yourself, the Milk Makeup Hydro Grip Primer is available on Sephora's website. You should probably go ahead and snag it now before it blows up any more than it already has.