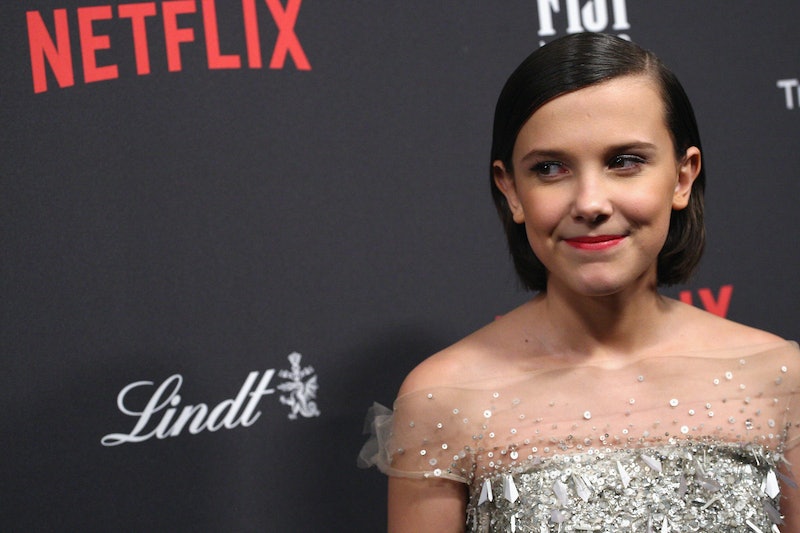 The galaxy is still in mourning over the loss of Carrie Fisher, the woman who brought Princess and General Leia to life in the Star Wars franchise. For so many people, Leia is a touchstone character who inspired them to reach for their own goals and dreams. For that reason, it's not surprising the talented Stranger Things star Millie Bobby Brown wants to play young Leia one day.

While some Star Wars devotees may rankle at the idea of another actor playing Leia, the character is so vital, not only to the franchise, but to young women, that it is only fitting her backstory be explored. With both Han Solo and Boba Fett set to receive standalone films, Leia should be next in line, and Brown would be the perfect choice to play her. HelloGiggles reported Brown revealed her Princess Leia dreams at a fan convention. Sharing a role she'd love to play, she reportedly said, "Princess Leia. If they made — I think they are making another Star Wars — I would love a role like that. Because I want to do something far from Eleven."

LucasFilm, are you listening? Brown possesses all the essential qualities necessary to play Leia: She is bright, ferociously independent, and just as quick with her wit as a young Fisher. It would be an honor to the legacy of Fisher and Leia for the character to continue on in her own story, instead of being permanently retired in the wake of Fisher's death.

A film focusing on Leia's origin would be the tale of a young woman ascending to power right in the midst of her teen years. In Star Wars Rebels, it was revealed Leia became a senator at the age of 14. Her younger years are spent being a spy and double agent for the rebels. Her history alone means an early years Leia film would be unlike anything Star Wars has done before, as it would focus on taking viewers inside the world of the Empire. Space battles are fun, but intergalactic political intrigue is undiscovered country.

Brown is an ideal candidate to bring a youthful Leia's story a sense of veracity. Not only does she resemble Fisher physically, she has a knack for playing young women who are forced to grow up before their time. Eleven and Leia are extremely different characters in terms of personality, but at their core, they are both left alone in the world at far too young an age. Just as Brown brought pathos to Eleven's journey of self-discovery and longing for a normal life, she could do the same for a 14-year-old Leia.

There are no plans for a young Leia film at this time, but there really should be. As the Star Wars universe continues to expand, the lost chapter of Leia's life deserves to be told. Leia's impact on the lives of fans is so beautiful, and with a chapter of her journey missing, there is still a chance for her to find new ways to inspire fans for years to come. And if Brown can be the actor to bring more Leia to the big screen, all the better.