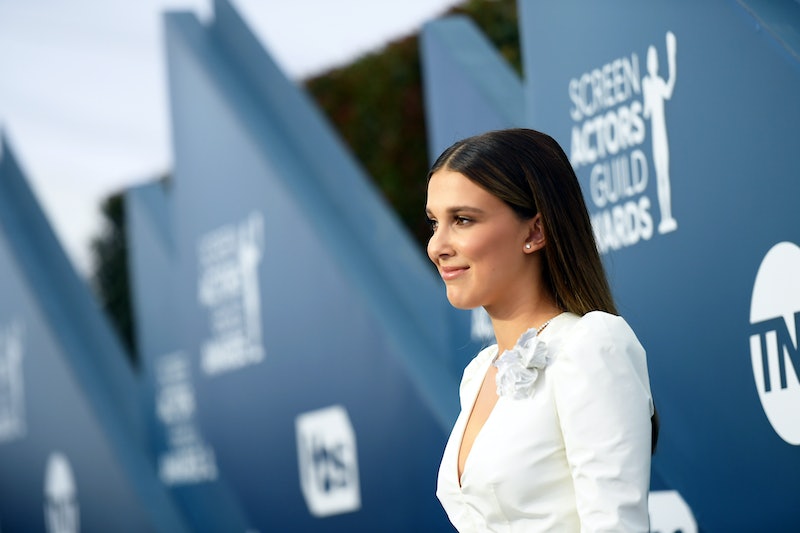 The Stranger Things cast just reunited on the Screen Actors Guild Awards red carpet, and although we're happy to see the gang back together again, all anyone could talk about was Millie Bobby Brown's 2020 SAG red carpet look.

Brown has been a red carpet darling since she first hit the awards show circuit. From wearing converse and space buns at the 2018 SAGs to her scoop-backed black frock at the 2018 Golden Globes, the Florence by Mills creator makes a statement each time she walks a carpet. Her ensemble for the 2020 SAGs was no different, combining two distinct styles into one killer look.

Brown wore a half-suit, half-gown design from Louis Vuitton. The suit-style jacket featured a floor-grazing, pleated train and floral brooch at her shoulder. Brown completed her stellar look with a chic, minimalist pair of cigarette pants and classic white pumps.

Her brunette locks were sleek and straight styled in a middle part, and for her beauty look, she chose a smoky brown eye and nude pink lip. With the v-neck design of the jacket, Brown added a simple Cartier diamond necklace as well as Cartier diamond studs and chic bands on her fingers.

While it has been a moment since Brown graced a red carpet, her 2020 SAG Awards appearance proves she's still a statement maker. No doubt she'll keep raising the bar with her red carpet looks as awards season continues.