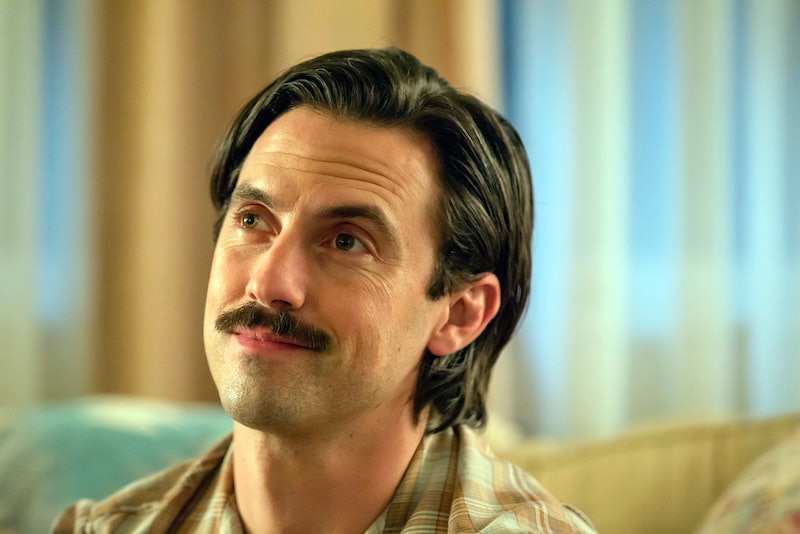 It's almost impossible to imagine anyone besides Milo Ventimiglia in the role of This Is Us' now iconic super-dad. However, in a new Variety interview, Ventimiglia reveals he almost wasn't Jack Pearson. Apparently, the casting directors were looking for someone completely different for the role — until he walked in that is. Given how perfect the Gilmore Girls actor is as one of TV's best dads, it's not surprising the This Is Us team changed their minds about the direction of the character after his audition.

As part of Variety's "Actors on Actors" series, Ventimiglia sat down fellow actor Freida Pinto to discuss the strangely perfect way he came to play the This Is Us patriarch. In the video interview, he said,

"They wanted somebody completely different. I walked in with my beard and my long hair and set my motorcycle helmet down and they went, 'Who is this guy?'"

It seems after his audition, the idea the people behind This Is Us had of what Jack should be like began to change. At the time, the 39-year-old actor was between jobs, and he notes that he had heard one of his favorite actors, Robert De Niro, would often grow out his hair and beard when he was in-between roles. After finishing up the movie Devil's Gate and losing out on a couple of TV roles, Ventimiglia tells Pinto he decided to do the same thing and just focus on his life for awhile. In a twist a fate worthy of a story from the show, his hair and beard gave him the perfect look to pull off the '80s era Jack.

This Is Us is a show all about life's moments of serendipity and inter-connectivity, so it only seems fitting that the show's pilot script landed in Ventimiglia's lap when he was in the exact right frame of mind to play the role. After returning to L.A., the actor just wanted to focus on leading his normal life for a bit instead of chasing new jobs. He explains,

"I had to just focus on being a human being, and then this role pops up and I read it, and I'm like, it's kind of like art imitating life. I was trying just to be this man existing as a man, and here's this man who's just trying to provide for his wife and his family, and all of that, and it was so simple and beautiful. I was like, I would love to do it, I would love to be a part of it."

Even though he wasn't the Jack that series creator Dan Fogelman initially had in mind, it's clear from his powerhouse performance in Season 1 that he is the Jack the show needed.

As the actor so eloquently tells Pinto about his role, "I don't think it was so much me choosing it, as it was it choosing me." Much in the way the Pearson family always seems to find exactly what they need out of life when they least expect it, Jack and Ventimiglia found one another at just the right time. The rest is beautiful TV history.