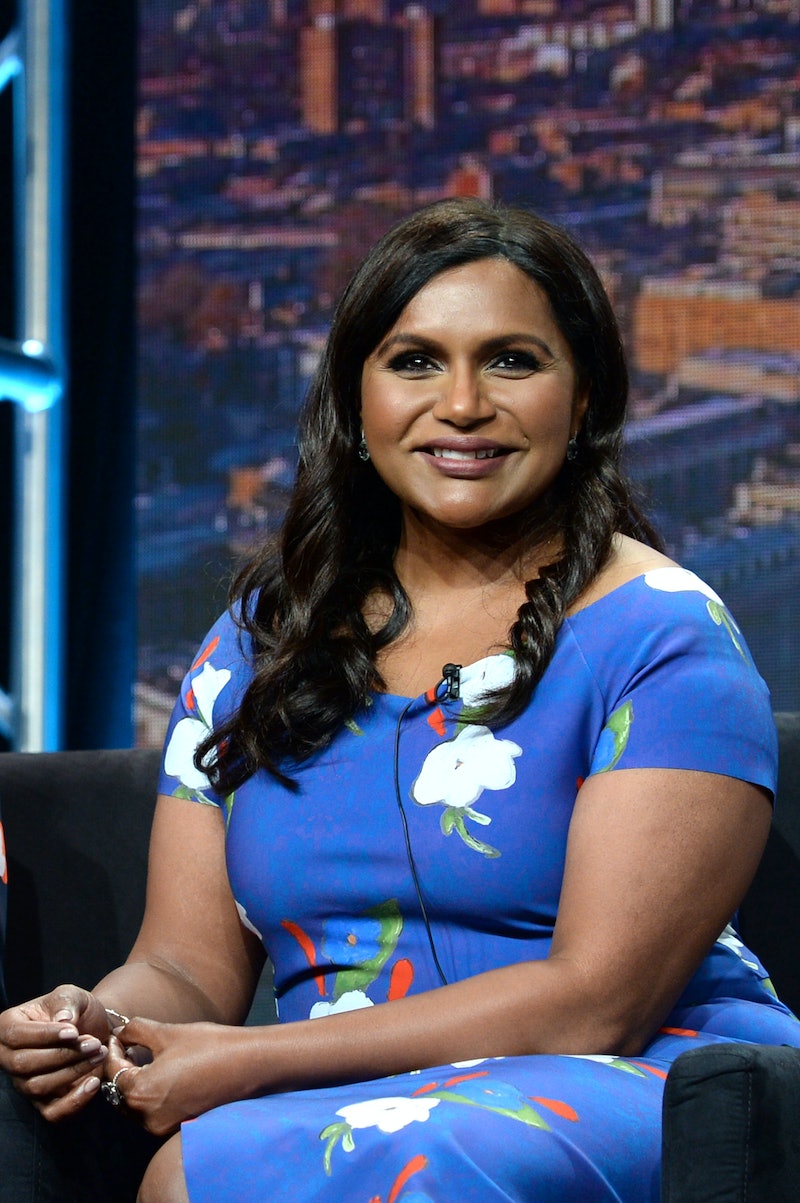 Lilly Singh is about to take her strides toward more diverse TV representation an extra step. For her groundbreaking debut, Mindy Kaling will be A Little Late With Lilly Singh's first guest, as The Hollywood Reporter revealed on Sept. 13. Given that the Indian-Canadian YouTube sensation will be the first woman of color to host a late-night talk show since Wanda Sykes fronted her own Saturday night chat fest on Fox for one season from 2009 to 2010, it will be a symbolic celebration getting support from a fellow beloved South Asian star.

Plus, there's more good news. Although NBC will officially premiere A Little Late on Sept. 16 at 1:35 a.m. ET, fans can stream Kaling's interview — along with the episode's special appearance from her The Office costar Rainn Wilson, as well as games and sketches — more than three hours early at 10 p.m. ET on the show's YouTube channel. Of course, it is a fitting homage to Singh getting her start with her || Superwoman || YouTube channel, which currently boasts nearly 15 million subscribers.

According to Deadline, Singh's other first week guests will feature all women and/or people of color, including: Saturday Night Live's Kenan Thompson (Sept. 17), black-ish star Tracee Ellis Ross (Sept. 18), and comedian Chelsea Handler (Sept. 19). The site also reported that NBC will air will air an hour-long primetime special to introduce Singh to viewers on Sept. 18, following the America’s Got Talent finale.

If Kaling's appearance on a late-night talk show rings a bell, that's probably because she recently starred as a fledgling late-night phenom breaking barriers in a once-all-white, all-male staff in the Amazon movie Late Night, alongside Emma Thompson. The similarities weren't lost on Kaling — who's said she's a big fan of Singh's work.

While promoting Late Night on the Canadian entertainment show, etalk, in June, the host asked Kaling if she had any advice for Singh. She immediately took the opportunity to lovingly sing her real-life counterpart's praises:

"Oh my gosh, well, Lilly is incredible, and I wonder if I'm qualified to give her advice because from such a young age she's had this massive following on YouTube. And to do that every day, she's probably used to the rigors of coming up with self-generating material. Characters dancing, impressions... Like everything. She can do it already. I wonder if she actually thinks that this new job will be slightly easier than what she's had to do beforehand. Of course I love that she's Indian and that her parents have been so supportive of that. That is something that is great for our community to see. But, honestly, I feel like I could learn from her, you know? She's fantastic and the idea that I could give her advice, it's a very nice question to even ask me. She's amazing. She's going to do great."

It was no surprise, then, that Kaling had taken to Twitter when A Little Late was announced in March to send her congratulations to Singh. "Yeaaaahh @IISuperwomanII !! Go sis go! ❤️🙌🏾," Kaling tweeted on March 14. Singh's response? "Thank you for paving the path sis ❤️❤️❤️," she tweeted at Kaling the following day.

As it turns out, Singh had apparently been a longtime fan of Kaling's as well. All the way back in Feb. 2016, she shared a photo of Kaling with Priyanka Chopra, along with the caption: "I would choose this picture over a Cinnabon. That's how much I love it! @mindykaling @priyankachopra #queens"

Singh is also fully aware that her forthcoming TV debut will be a huge win for a more diverse representation on the small screen as a bisexual woman of color, particularly in the largely white male-dominated genre.

“An Indian-Canadian woman with her own late night show? Now that is a dream come true,” Singh said in a March statement, per Entertainment Weekly, of taking over Carson Daly's time slot. “I’m thrilled to bring it to life on NBC, and I hope my parents consider this to be as exciting as a grandchild."

And who better to help celebrate the milestone than fellow trailblazer Kaling? Their Sept. 16 banter will surely make for must see TV.

More like this
Linda Ronstadt’s “Long Long Time” Plays A Pivotal Role In The Last Of Us
By Brad Witter
Here’s What Happens To Bill & Frank In 'The Last Of Us' Video Game
By Brad Witter
'Stranger Things' Finn Wolfhard Is “Proud” Of Noah Schnapp For Coming Out
By Sophie McEvoy
Pedro Pascal Barely Got Through The "Lisa From Temecula" 'SNL' Sketch
By Stephanie Topacio Long
Get Even More From Bustle — Sign Up For The Newsletter
From hair trends to relationship advice, our daily newsletter has everything you need to sound like a person who’s on TikTok, even if you aren’t.