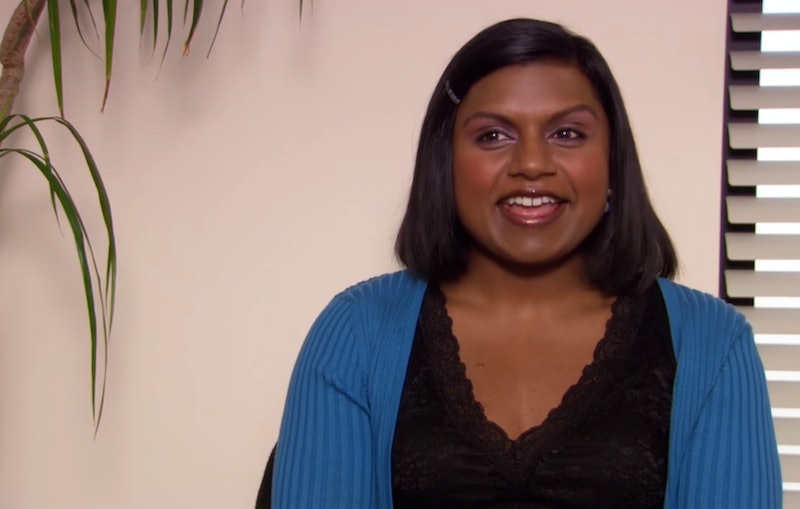 When it comes time for a promotion at Dunder Mifflin, let it be known that Kelly Kapoor did not slack on wishing her boss a happy birthday. On August 16, the always funny Steve Carell turned 56, and one of his castmates from The Office sent him a special birthday wish on Twitter. Mindy Kaling's birthday message to Steve Carell is simple, to the point, and a perfect ode to the actor's Michael Scott roots. Kaling tweeted, "Happy Birthday, @SteveCarell. Never forget..." above a GIF of Michael declaring, "I am Beyoncé, always."

Fans of the show will remember that Michael identified himself as the Beyoncé of the office when Andy dared to compare him to Ali Larter. As HelloGiggles pointed out, this was a nod to the movie Obsessed, which is a pretty deep cut reference, even for Andy and Michael. The line has become iconic and it's the perfect one to celebrate Carell with — after all, there's no higher praise than to remind someone that they're the Queen Bey of their lives.

Suffice to say, The Office fans were living for Kaling's flawless birthday message, and many of them couldn't help but share a certain Mindy Lahiri GIF from The Mindy Project in response. On her own show, the fictional Mindy once reminded herself, "You're not Mindy, you're a warrior, and your warrior name is Beyoncé Pad Thai." The moral of this story is clearly that all roads lead back to The Office and Beyoncé.

Kaling's birthday tweet to Carell seemed to remind people how amazing The Office is all over again. (Not that it's easy to forget.) Some used the opportunity to call for a reboot, but mostly the fans on Twitter were just happy to see the cast still supports each other in their trademark silly way.

There were plenty of tweets agreeing that yes, Michael and Carell are indeed total Beyoncés.

While others took inspiration from Kaling, and honored the one and only Carell with other The Office-themed b-day tributes.

One thing everyone seemed to agree on is that the cast of The Office remains one in a million. Even though they've all moved on to different shows and projects, they still make time to celebrate each other. Whether it's Kaling wishing Carell a happy birthday, or Angela Kinsey and Oscar Nuñez reuniting to recreate their famed fire drill scene, these people are still very much in each other's lives.

In an age where it feels like everything is getting a reboot, it's no wonder that people are constantly asking when The Office will be coming back. But truthfully, the show's cast hasn't stopped serving up amazing moments even though the show is off the air. While it would be fun to see them all get together for a big revival one of these days, for now, it's enough knowing that they're all still on team Dunder Mifflin.

Kaling, Carell, and the rest of The Office gang are all Beyoncés, and fans of the hilarious show will never let them forget it.