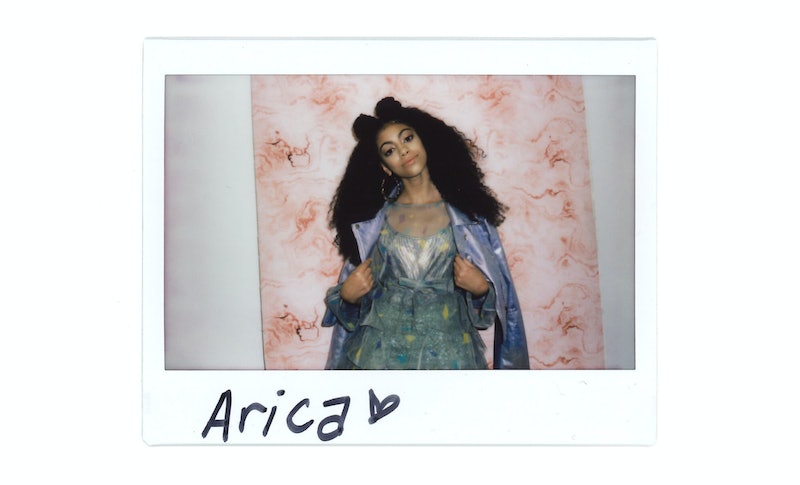 When celebrities hang out with Bustle writers, we want to give them the chance to leave their mark. Literally. So we hand them a pen, a piece of paper, a few questions, and ask them to get creative. This time, mixed-ish star Arica Himmel is leaving her mark in the Bustle Booth.

At just 14 years old, Arica Himmel has already experienced her fair share of ish. Himmel, who plays young Rainbow Johnson in ABC's 1985-set coming-of-age black-ish spinoff, grew up in Manhattan and tells Bustle that she's faced a lot of the same stress as her character does.

Much like Bow (played in black-ish by Tracee Ellis Ross), Himmel is also of mixed race (her parents are Liberian-born singer Zelma Davis, of C + C Music Factory fame, and white real estate agent Brandon Himmel) — and has felt pressure to shrink herself into a box to make her peers feel comfortable.

"Even though I've grown up in New York in a diverse community and a diverse school, sometimes I'm in situations where I'm kind of forced to choose a side," explains the actor, who's now taking classes online while she films the freshman comedy. "I feel like I can't really choose between white and black, and it's a little confusing."

She describes her middle school as being split up into cliques ("You would have the black girls over here, and the white girls on another side, explains the actor), and, despite trying to be nice to everyone, she eventually gave up trying to please all of her classmates. "I just hung out with who I wanted to hang out with, who I thought would be good for me, who I loved to hang out with, not really thinking about race or who's going to hate me because I'm hanging out with one person," adds Himmel. "I try to remember that everybody's going to love me for who I am without me trying to pick who I should be."

Her school days also helped her particularly relate to the Oct. 8 mixed-ish episode, "Let Your Hair Down," which, in part, dealt with microaggressions pertaining to natural black hair. Admitting that some of her peers still "don't know how to treat other people," Himmel shares that her experience has been that "everybody notices you when your hair is straight." When the teen wears her hair natural, however, she says "people don't really think of you." (Her point is almost inconceivable, given that she looks every bit a supercool style icon, sporting space buns and loose curls during her visit to Bustle's NYC offices.)

Despite the challenges she's faced thus far in her formative years, Himmel has the rare privilege of a contacts list that includes several A-list role models and mentors to provide guidance. First there's Ellis Ross, whom she reveals often goes over scripts with her and encourages her to make her version of Bow all her own. Then, she has her "godsister," singer Teyana Taylor (their moms have been "best friends since high school"), who's recommended she "stay with the people who have always been there" for her. She's even sought advice from her onscreen mixed-ish dad, Mark Paul Gosselaar, who made his Saved by the Bell debut as Zack Morris when he was Himmel's age. His on-set demeanor, she says, has taught her to be professional and kind.

Given that Himmel was born 20 years after the series takes place, she's learned some history lessons of sorts on set, too. "I had to use a fax machine in one scene, and it was the first time I'd seen one," she recalls with a laugh. "I didn't really know what that was, so I was like 'how does this work?'"

Get to know more of what makes Himmel who she is through her questionnaire below.

More like this
'That '90s Show' Star Callie Haverda Got Advice From Mila Kunis & Ashton Kutcher
By Brad Witter
Keyla Monterroso Mejia Is Finally The Star Of The Show
By Gabrielle Bondi
At 28, Rosie Perez Risked Her Career To Stop Playing Stereotypes
By Gabrielle Bondi
At 28, Debra Jo Rupp Was Living A Much Different '70s Show
By Grace Wehniainen
Get Even More From Bustle — Sign Up For The Newsletter
From hair trends to relationship advice, our daily newsletter has everything you need to sound like a person who’s on TikTok, even if you aren’t.