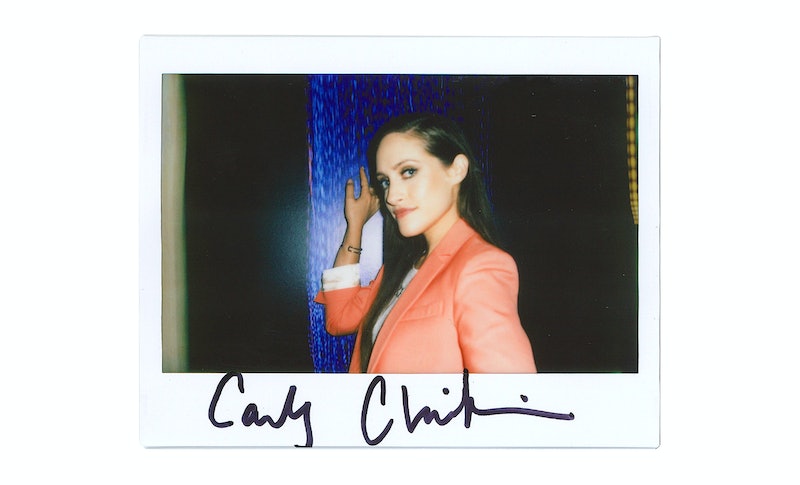 When celebrities hang out with Bustle writers, we want to give them the chance to leave their mark. Literally. So we hand them a pen, a piece of paper, a few questions, and ask them to get creative. This time, Mr. Robot star Carly Chaikin is leaving her mark in the Bustle Booth.

“I feel like my eyelash is falling off,” Carly Chaikin says. She’s tipping forward, trying to push the coal-black falsie, which is indeed falling into her eye, back on. It’s 90 degrees in early October in New York City. This is her last interview of the day, her high heels have already come off, and now, it seems, her right lashes would like to join them. “Oh, well.”

In interviews like this, no unplanned moment is beneath extrapolation. This one says “Stars — They’re Just Like Us!” more succinctly than any talking point. Eventually, Chaikin will comment on the series finale of Sam Esmail’s prescient cyber-thriller (“We are all so happy with how it ends”) and what’s next for her (“I don’t know”), but this is the moment in which the 29-year-old actress seems the most off-script. Or maybe it’s this one: “I cannot remember my passwords for sh*t.”

We’ve been discussing the professional liability of having played, since 2015, a computer hacker named Darlene who can access the personal details of basically anyone. “Sam has just opened my eyes — just forever changed the way that I think about the world, about technology,” she says of the show, which centers on a team of vigilante hackers trying to bring down the corporations that control America. “It's brought out a lot of paranoia.”

So Chaikin stores her passwords in Lastpass, a password managing app. All five of them, that is. “At least I know that I'm being dumb,” she jokes.

It’s easy to forget that Mr. Robot premiered before a healthy distrust of Big Tech was de rigueur – before the Equifax breach and Cambridge Analytica. Before Mark Zuckerberg was hauled before Congress. “I actually asked Sam, What do you think the difference would be if we made Season 1 now? And we were like, I don't think people would care as much because our show came out with all this stuff in a time before people were talking about technology, hacking, all of the stuff that we covered.”

Don’t get her wrong, Chaikin still loves the internet, especially phone games. Right now, she’s playing Farm Heroes. “It has nothing to do with a farm,” she explains, refusing to say how much money she’s spent as she’s leveled up past 2000. “I used to catch up and have to wait for them to make new levels,” she says. “It’s actually like, I need help.”

Help comes up a lot with Chaikin. Beyond fostering her paranoia, she credits Esmail with helping her get comfortable with silence. “I think the biggest thing he’s taught me is taking my time. A lot of times, the most interesting moments are when someone's not talking. The in-between moments.”

Chaikin recently moved back to her native LA, where she helps out with an inner city arts charity by teaching painting. “I've been asking the kids, What's your favorite thing about this? It's so interesting to have them look at their work and appreciate it and take it in and see what they like. Like, oh, I really like this color.”

So I ask her to do the same: to look at her last four years of work and appreciate it now that the canvas from her on-set director's chair — the one bearing Darlene's name — is in her home office. What’s your favorite thing about Mr. Robot?

“God,” Chaikin says, leaning deep into the chair like she’s still taking it all in. “Everything.”

More like this
'Grey's Anatomy's New Intern Got Advice From Dr. Bailey Herself
By Grace Wehniainen
On 'The Handmaid’s Tale,' Christine Ko Fights Back
By Gretchen Smail
A New 'And Just Like That' Table Read Pic Confirms A Key Character's Return
By Jack Irvin and Grace Wehniainen
You’ll Definitely Recognise Both Of Ty Tennant’s Parents
By Maxine Harrison
Get Even More From Bustle — Sign Up For The Newsletter