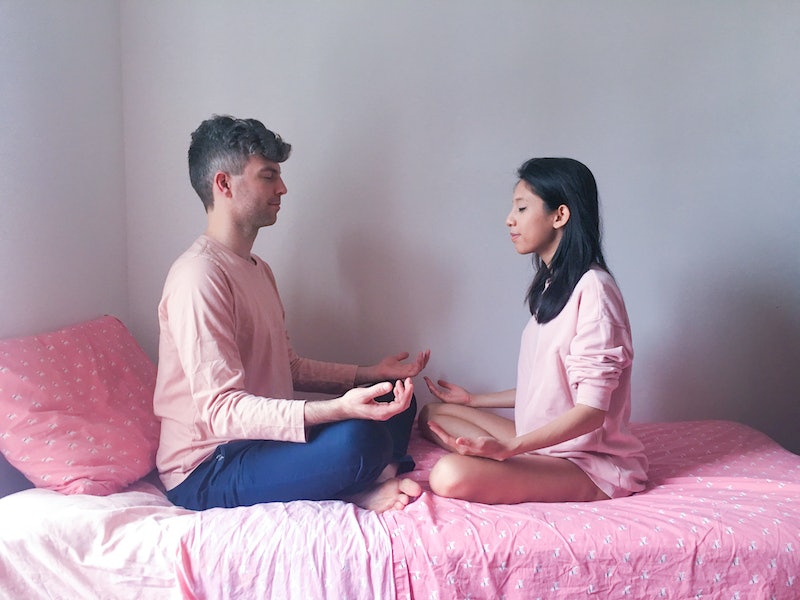 Read enough sex advice columns, and you’ll conclude there’s only one way for a couple to rejuvenate a sex life gone stale: get kinky. Whether that means threesomes, new toys, bondage or what-have-you, a little experimentation in the bedroom is apparently all a couple needs to rekindle the spark.

In reality, of course, mundanity is far from the only reason sex can stagnate in a relationship. For me and my boyfriend Bert, rough play and sex parties are staples in our passion playbook — and yet as of a month ago, we’d been having a dry spell for almost three months. So instead of trying to go into overdrive with the kink, Bert and I decided we should go in the opposite direction: slowing down.

To refresh our relationship, we decided to try meditating. Yes, meditating.

At first blush, the idea of meditation seems anything but sexy: The word calls to mind images of waterfalls, balancing rocks and people sitting totally still and silent — far from the sweaty movement, uncontrolled moans and titillating sensations we associate with sex. But research suggests the two are more closely linked than we think: Studies have found that people who meditate tend to have better sex, more sexual desire and even get aroused more quickly.

“Meditation teaches you how to savor each moment that you’re in,” explains Ora Nadrich, a mindfulness meditation teacher and president of the Institute for Transformational Thinking. “People who meditate develop good concentration and maintain present moment awareness. And when we’re totally present, our senses are heightened.” That means you’re able to really tune into every touch, sound, smell and feeling and experience them more intensely — making for some seriously sensational sex.

And aside from helping you focus on physical pleasure, meditating also helps calm an anxious mind. “Stress is the number one thing that can diminish our sexual appetite,” Nadrich says. “When we’re stressed, we produce too much of a hormone called cortisol, and that has a direct effect on lowering one’s libido.”

“When we practice meditation, we signal to our brain that it can take a break from working so hard, and by focusing on something like our breath, we send a message to our body that it can go into deep relaxation,” she says. “That is when we can begin to feel like ourselves again, which can help us build up our libido and reconnect to our sexual desire.”

So, I wanted to put the theory to the test: Bert and I agreed to meditate every day for 30 days straight to see how it affects our sex life.

Bert had actually spent the better part of 2017 building up a pretty solid, daily meditation habit, though he'd long since dropped it. Meanwhile, I've literally never even tried yoga before. I've meditated a handful of times at various college retreats and connection events, but I've certainly never tried building it into my daily life. But Bert and I are both pretty game for anything — especially anything involving sex or self-care, let alone both. So it seemed like the perfect win-win situation for us. We walked into our little experiment with totally open minds.

To get some inspiration and tips, I checked in with a few meditation experts. “Meditation is like any sport. It takes time and patience,” said Tal Rabinowitz, the CEO and founder of The DEN Meditation, a Los Angeles meditation studio that helps newbie meditators like me get started. “Each time is beneficial even if it was difficult. So be easy on yourself, start slowly, don’t expect too much and watch how it grows.”

She recommended we start with simple breathing exercises for the first few days to get into the rhythm. As we get more experienced, she suggested taking that practice into the bedroom: “When you are having sex, take a moment to pay attention to your breathing. Slow it down, do deep inhales and exhales and notice it. This will quickly bring you back to the present moment and reconnect you. Your senses will come alive.”

Nadrich introduced us to a technique called “soulgazing,” which involves staring directly into each other’s eyes uninterrupted for several minutes. Another option was tantric sex, that ancient Eastern practice involving slow, highly intimate activities and non-orgasmic intercourse as a means of bringing romantic partners closer on a spiritual level. “You can take turns exploring each other’s body’s slowly and spending time on one another's erogenous zones, turning each body part into a focused meditation,” Nadrich said. “Let your partner know which part of your body you want them to focus on and give pleasure to.”

Taking all this advice together, I came up with a rough calendar of how we’d organize our experiment: For the first week, we’d do basic meditation exercises to get ourselves in the rhythm and mindset. For the second and third weeks, we’d try ones specifically made for romantic partners, including both connection-driven exercises like soulgazing and explicitly sexual rituals like tantra. Then for the final week, we’d return to the basics.

To put it kindly, we did not exactly end up following those guidelines... Here’s what actually happened.

Bert and I began the challenge while on vacation in Lisbon, Portugal — which definitely made starting up a lot easier and more enjoyable. Since we were already off our normal work schedules, we had no problem incorporating meditation into our day.

We started with a 10-minute guided exercise by Jessica Goodman, author of Good Sex: Getting Off Without Checking Out. Available for free on YouTube, this meditation focuses on boosting pleasure by honing in on good sensations already present in the body. Bert and I did this exact ritual for our first few days, usually in the afternoons just before we headed out to tour the city.

Here’s what I can say about the sex: truly otherworldly. Our Airbnb was a small, very white, sunlit space with giant windows all around us. We had sex with every single one of them open. Although I didn’t draw the connection at the time, perhaps the mindfulness skills were already subconsciously working their magic: During those heated sessions, I was hyper-aware of the feeling of the wind on my bare skin, the sound of people chattering in a foreign language on the streets, the salty-fresh smell of the ocean in the distance. Not to sound too hippie-dippie, but I’m telling you — more than once, it was the sight of endless terracotta rooftops rising and falling on Lisbon’s hills that pushed me to orgasm. I’ve really never been so focused on all my body’s senses at once like that.

That first week was by far our smoothest. By week two, things were already getting messy.

Bert and I were obviously with each other every night in Portugal, but back home in New York, we don’t live together. Even though we spend about four nights together a week, being on our own every other day definitely messed with the rhythm we’d developed abroad. I downloaded Headspace, a popular meditation app, and began doing their basic series during our days apart; Bert, bless him, meditated as often as he could remember, mostly just making up his own routines on the spot.

On our nights together, we followed Nadrich’s advice and attempted tantra. Our routine started with about four minutes of soulgazing, followed by five minutes in the Yab Yum position: him sitting cross-legged on the bed with me sitting on his lap straddling his waist as we synchronized our breath, touched foreheads and embraced with our full bodies. Always naked, of course.

I’d thought the tantric rituals would sometimes transition naturally into sex, but they surprisingly never did. That’s not to say they weren’t deeply connective — quietly holding the person you love with your full bodies touching, chests rising and falling together, is a heartwarming experience. Every session left us smiling, totally at peace with each other. Though not quite sexy, it was very romantic.

But the pressure of doing the little exercise every day started to weigh on us: We usually meditated at night, just before bed, and therefore found ourselves exhausted and unable to focus. Sometimes we’d get home from a long day of work and just couldn’t motivate ourselves into the task. I’m disappointed to say we even started skipping days. Even when I really wanted to do it, I could tell how tired Bert was and felt bad asking him to come focus on this — on us.

By week three, things were looking grim. Whenever we brought up that we had to meditate, we both audibly grumbled. Worse yet? The sex had also slowed significantly, perhaps even more than before we started the challenge. During the first week, we had sex every single day. During all of weeks two and three, we might have hooked up… twice? Three times? It wasn’t just a dry spell anymore. We were in the desert.

Bert told me he was feeling guilty, partly for not meditating when I wasn’t there and partly for being too distracted and exhausted by his job to have sex with me when I was. He couldn’t “strike a good balance” between concentrating on himself and concentrating on me, he admitted. But that conversation itself might have been a breakthrough…

During our last week of the challenge, Bert asked me out on a date. It was nothing terribly fancy — we ate out at our favorite brick-oven pizza place and caught a movie at the local theater. The point was that he wanted to spend some dedicated time on our relationship.

By this time, we’d eased up on our “rules” for the challenge completely. We meditated whenever it made sense for us: during a spare few minutes before tuning into newest episode of Westworld, in the mornings just before we bustled off to work (we both have flexible starting times) or even in our post-coital, lovey-dovey stupor.

One time we were already in bed with the lights out to go to sleep when we remembered we had to meditate. Bert suggested we try something that felt a little less like a hassle so we could still in enjoy it: We have a running inside joke about how much we like each other’s butts, so that night we stayed under the covers, turned our backs to one another and touched our butts together. Seriously. We meditated like that together, focused in on that silly, delightful sensation of booty contact.

On the days we did meditate, he’d text me later saying: “Thank you for slowing us down.”

I don’t care what anyone tells you: Meditating is not all sunshine, waterfalls and perfectly balanced rocks. And doing it with your boyfriend? Yeesh. Starting and keeping up a healthy habit is hard enough for one person, let alone trying to do it in tandem with a partner.

Although admittedly Bert and I both dropped the habit as soon as the experiment ended, we both agree the experience taught us a lot. I realized just how much I missed having sex more regularly — and that I really hadn’t been open with my boyfriend about it at all. Bert realized just how much his stress from work was affecting not just his sex life but the amount of effort he was putting into our relationship. Toward the end of our 30 days, we had a long, extensive conversation about how we could’ve approached this whole challenge — and our out-of-sync libidos — in a more loving, productive way.

And you know what? Since then, our sexual chemistry has been off the charts.

I can’t say whether meditating directly makes sex better. But setting aside dedicated time and headspace for being totally present with your partner — whether that means meditating together or just getting real about expressing yourselves — can certainly breathe new life into a couple’s connection.