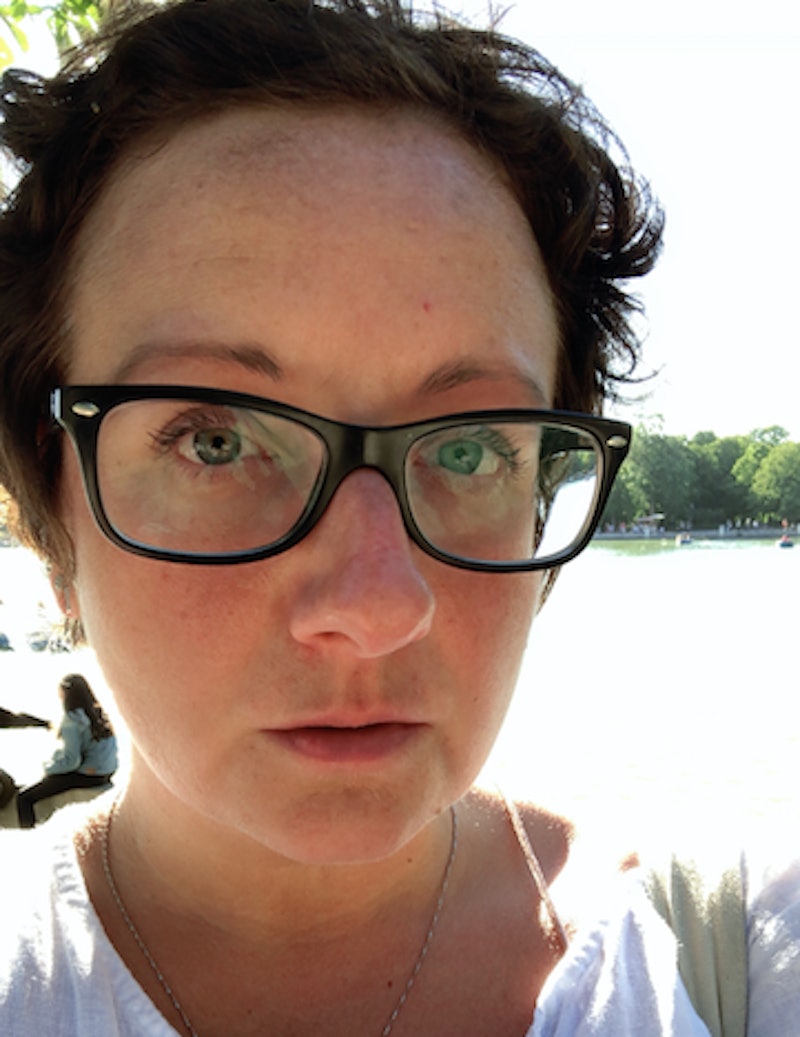 Even before I was officially diagnosed with depression, I felt bad about being depressed. Raised in an upper-middle class home in New England, the kind you see in movies with the two-car garage, a golden retriever lounging on the front porch, and two happily married parents, I don’t look like someone who "should" have depression. At least, that’s what I’ve been told by people who can’t understand depression.

Anyone can be diagnosed with depression, regardless of their upbringing. According to the Anxiety and Depression Association of America, major depressive disorder affects 16.1 million American adults every year. In people between the ages of 15 and 44, it's the leading cause of disability in the United States. Although it's more common in women, depression affects an incredibly diverse population. But despite this, the stigma remains. Meaning that people who haven't been affected by depression personally may not understand that reality, and that can have harmful effects.

The first time my depression was questioned as being “real” was by my father’s sister. Over lunch one day at my college, my aunt asked me how I could be depressed — as someone who'd had a difficult life of her own, she saw my privileges and reflexively thought I couldn't have it so bad. Although I’d asked myself the same question for years, I still didn’t have the answer. I told her it was bad wiring, thinking if that wasn't a good enough answer, she could look it up on her own. But she pushed the issue and suggested that because of my privilege, my depression was somehow steeped in "wanting attention." Defensively, I told her that I wished that were the case.

I didn't have the energy to say otherwise, and it's OK to not spend your energy in these cases. "When you are struggling with depression, it is important to remember that your energy for explaining your suffering to others who do not understand may be limited," Dr. Greg Kushnick, Psy.D., a licensed New York State psychologist, tells Bustle. "In addition, the darkened lens through which you view your support may distort the value you ascribe to the quality of support someone offers." In other words, depression, especially depressive episodes, doesn't allow people to see and interpret things clearly. Support included.

Although it's far more accepted now than it was 50 or even 20 years ago, mental illness still has a stigma attached to it. Even now, if I’m having a rough couple days where I can’t bring myself to work or socialize, I’d rather say I have a physical illness than that my depression is flaring up. It's isolating to feel this way; to make excuses as opposed to being honest. And that isolation is amplified when dealing with friends, coworkers, and family who don't understand. In my mind, to have a weak stomach or the flu is more black and white than having to take a mental health day. The latter leaves too much room for speculation.

But the problem with depression is you can only keep it to yourself for so long. The way it manifests in your daily life, or how it pops up uninvited and sticks around, sometimes needs to be explained to others. Although I knew I wasn’t alone, the guilt that came with hiding my depression was sometimes just as painful as the depression itself. I found that in being vocal about it in my personal and professional life, the feelings of guilt were eased a bit, but they still didn't disappear.

I finally realized that I didn't have room in my life for that guilt last year. Although I've been in therapy for the last 16 years, I never once adjusted my medication that I'd been on since 2009. But in October of 2018, my depression and anxiety was the worst it had been since 2005 after five years of being put through the wringer emotionally. I was reaching out for help, but some of my friends me their true colors.

One friend asked me why I was “like this.” He said people in far worse situations than mine were able to get out of bed every day and face life, while I was crying and shaking over something I couldn’t explain. “Do you think it’s fair?” he asked. With my mind twisted, I told him I didn’t care what was fair. I was sick of trying to justify myself to him. He wasn't the only friend who said something along these lines, either.

I thought about all the times I sat in therapy on relatively good mental health days and cried about my bad ones because they didn’t make sense. I thought about the conversation with my aunt, and these comments from friends. I tried to recap all the beautiful things in my life and all the love and support I’d ever known, but couldn’t see those things with my depression fogging my view. Instead, the guilt and shame made me see myself as a selfish, spoiled brat who had no right to be depressed which, of course, just made everything worse. So I chose to pull away from those people who would make uninformed or hurtful comments about my mental illness. I’m glad I did.

At first, these particular friends would text occasionally, to which I didn't respond. But eventually those messages dwindled and they stopped checking in on me. That, of course, made it hurt even more, although I had been the one to initiate the end of the friendship. I wasn't trying to punish them for regurgitating tired old stigmas about mental illness — but I needed space to heal.

"A truly supportive friend or family member may want to understand why you are depressed, [and] may also try to give you perspective as a way to feel less depressed," Dr. Kushnick says. "However, anyone who has grappled with depression knows that a bit of perspective does not lift depression." Treatment, including talk therapy, lifestyle changes, or medication, is actually what lifts depression.

According to Dr. Kushnick, it can be healing to give yourself space from people "who make you feel ashamed, guilty or misunderstood for being depressed." Dr. Kushnick also explains that depressive experiences can sometimes make it clear whom you can count on, who can accept your depression, and who can make you feel supported. Not everyone can do that, no matter how close you might be to them, and that's OK.

A couple of months later, with my new medications and dosages having me back on an even keel, relatively speaking, I continued to stay away from those few friends who made me feel bad about my depression. I politely answered any texts I got from them, but never reached out first. In my mind, they no longer had a place in my life.

As I took away from one of my favorite books on depression, Darkness Visible by William Styron, I know it’s not only difficult, but can be incomprehensible for some people to understand such immense pain and hopelessness. It's not easy to put what depression feels like into words for others to understand. But we’re no longer in the dark ages. Enough research has been done about mental illness that people should know that depression is a brain mis-wiring — and it can happen to people regardless of the adversity they've faced.

"Someone who truly cares for you will understand in the future when you explain your depressive withdrawal," Dr. Kushnick says. "[But] when someone tells you that you have no reason to feel depressed, you can tell them that this advice is not helpful and it makes you want to distance yourself from him or her."

Even as you rightfully desire to distance yourself from people who make you feel bad about your depression, it's important to maintain other kinds of support, since isolation can be a symptom of depression and even exacerbate it. Spending time with family and friends who do understand, or seeing your therapist twice a week instead of once, are examples of extra support that can help prevent that feeling of isolation.

As for those who don't understand, in these situations, Dr. Kushnick suggests, asking these people to listen and not tell you what you should do can help bridge the gap of understanding. You can also tell them to respect how you feel and not make you feel ashamed about it. "One strategy for managing your support network when you are depressed is to speak directly about what you need from someone when they are misfiring with an attempt to support you," Dr. Kushnick says.

I'll never be at peace with my depression, because it will never let me be at peace. Although I’m smart enough to know anyone can have it, my depression will never stop me from feeling at least a little guilty about it. For most people who have a mental illness, it’s something that needs to be managed regularly. That’s not easy. But I strongly believe anything that interferes with managing your depression needs to be cut from your life. Even if that interference is a family member or friend.

More like this
When Your Partner Has ADHD (And You Don’t)
By Camille Beredjick
GIRLI & Q Fell In Love At A Skatepark & Never Looked Back
By Jessica Morgan
How To Tell If Your Partner Has A God Complex, According To Experts
By Madeline Howard
I Was All For Medicating Mental Health Issues – Just Not For Me
By Anonymous, as told to Dana Smith
Get Even More From Bustle — Sign Up For The Newsletter