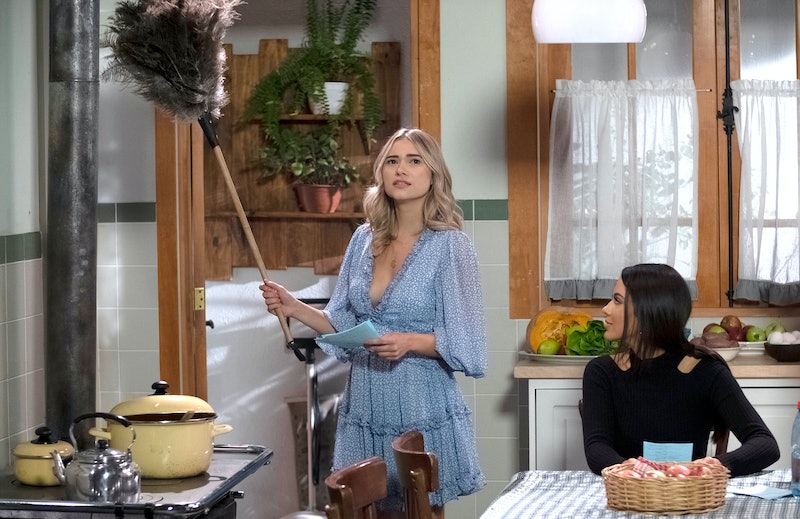 Mykenna Dorn's over-the-top facial expressions and meme-worthy tongue movements on The Bachelor may have earned her a fair share of fans. Unfortunately, it also inspired quite a few trolls. On Wednesday, Feb. 19, Mykenna fired back at people accusing her of doing drugs on The Bachelor, telling people to "take their opinions" elsewhere.

The fashion blogger kicked things off by sharing a collection of mean Twitter posts on her Instagram Story, where people live-tweeting the show speculated that she was "on drugs" due to her infamous tongue movements ahead of one of the Rose Ceremonies. After posting a series of eye-roll emojis, Mykenna set the record straight once and for all in a series of passionate videos. "I'm honestly done with this conversation and the daily DMs I get about this," she began, before telling anyone who thinks she was doing drugs during her time on The Bachelor is "obviously wrong."

Mykenna went on to explain that she and the other women competing for Peter's affections needed to "tell the damn doctor" all of her symptoms in order to get "a damn Advil," so there's no way that anyone on the show could possibly be abusing substances. "Do you really think they're going to let us do cocaine on the show?" she asked incredulously. "Like, we are highly monitored all the time. So you and your opinions and your comments can seriously f*ck off."

In addition to the video, Mykenna wrote that the constant accusations are "not worth my energy anymore," and that anyone who wants to comment about her behavior on the show can "F off." In a follow up video, Mykenna also explained that she considers accusations of drug use to be "a serious thing," not something people should be joking about "especially today in our world with overdoses."

While Mykenna doesn't have any time or energy for negative online comments, she does have a sense of humor about her now-iconic tongue movements on The Bachelor. On Feb. 14, she shared a clip from The Ellen DeGeneres Show on Instagram that featured the comedian and talk show host laughing at a dramatic edit of Mykenna from one of the Rose Ceremonies. "Not what I had imagine[d for] myself being featured on @theellenshow for but I’ll take it!!" Mykenna wrote alongside the video, triumphantly adding, "I mean I made THE ELLEN DEGENERES LAUGH!!! Is this real life?!?"

Despite the trolls and her emotional elimination from The Bachelor, Mykenna has no regrets about her time on the reality show. "My time on #TheBachelor didn’t go as I had hoped but that’s okay," she wrote on Instagram shortly after her elimination episode aired. "I walked away from this experience with my head held high and with a new found love for myself." And that includes a love for her unique facial expressions.