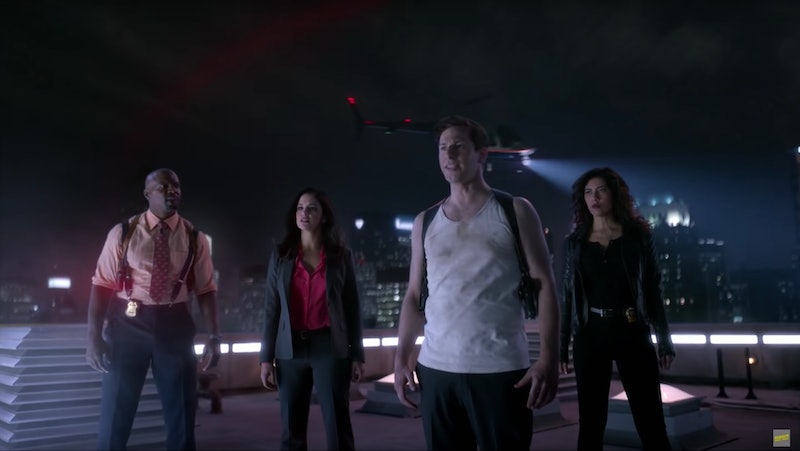 After five action-packed seasons on Fox, fans know Brooklyn Nine-Nine was cut from the channel's 2019 programming lineup last May. Luckily, NBC picked up the series hardly two days later. And, as of Sunday, Dec. 9, its new parent network has released two teaser videos for Brooklyn Nine-Nine Season 6, as reported by E! News. NBC shared the delightfully silly, and entirely glorious, pair of Brooklyn Nine-Nine promos with the masses via YouTube Sunday morning, and reminding fans of the show's official start date to seal the deal.

That's right, Nine-Nine enthusiasts: It's actually happening! Last month, NBC revealed the sitcom's Season 6 premiere date for the first time with a goofy clip on Twitter, letting fans know the 99-ers were gearing up for their much-anticipated return to television (albeit, on a totally new channel), slated to kick off Thursday night, Jan. 10. In light of Fox's Brooklyn Nine-Nine cancellation scare earlier this year, confirmation that the show's upcoming sixth season was, in fact, on its way felt like a pretty huge relief. (It was also, obviously, totally exciting.)

And, after witnessing the hilarity set forth by Sunday's new teaser videos, it seems safe to say fans of the show are going to be extra excited about Brooklyn Nine-Nine's return to our television screens. In perhaps the most amusing homage to Die Hard that pop culture has seen in a while, NBC's new promotional videos see the 99th precinct living out Detective Jake Peralta's wildest cop fantasy. Which, naturally, involves reenacting that famous helicopter jump scene from Die Hard. (Not too surprising, since fans of the series know full-well that Jake is sort of obsessed with the Die Hard franchise.)

"We gotta get out of here!" Jake calls out to Terry, Amy, and Rosa at the first promo video's start, while a helicopter whirs loudly overhead. Much like the late-'80s movie scene that inspired it, Brooklyn Nine-Nine's new teaser opens on the foursome stranded atop some unmarked New York City skyscraper. Continuing, Detective Peralta (played by soon-to-be Golden Globes co-host Andy Samberg) informs his team that "the building's going to blow."

"There's no way off this roof," Terry Crews' character, also named Terry, laments, before exclaiming, "We're stuck!" But thankfully (and maybe with a little too much ease), Jake quickly devises a multi-pronged plan for escape. "If only there was some way to repel down," Jake muses, before conveniently whipping out some kind of harnessing apparatus. Smiling proudly, he continues, "Oh wait, there is." One by one, Jake doles out ropes to each of his colleagues, who respectively manage to scale the building's exterior and land safely on the ground below in just a matter of seconds.

Jake, on the other hand, stays behind. Why? Well, simply put, he's got other (considerably more, ahem, creative) plans for his emergency departure. Eyeing the helicopter that's been circling for the video's duration — now, seemingly gearing up for a quick getaway of its own — Samberg's spirited character summons all the blind courage of his favorite fictional hero. "Time to wrangle me a chopper," Jake says dramatically, before immediately proceeding to hurl himself off the side of the building, Die Hard-style. "3-2-1. Slow mo!" he yells, and somehow ends up actually latching onto that helicopter.

"Suck it, gravity," Jake tells the camera, while his colleagues erupt into a chorus of celebratory chants below. Anyone a little confused right now, re: relevance? As the chanting fades out, the promo switches to a shot of the team back inside the 99th precinct. "And that's the recruitment video for the 99," Jake explains, though Captain Holt nixes the idea almost immediately.

And, where NBC's first promo video goes on to make use of some clever wordplay — "Brooklyn Nine-Nine makes the leap to NBC January 10," a narrator says at the first trailer's end — that Jake might appreciate, Sunday's second teaser vid posits an alternate ending, courtesy of Captain Holt. Suffice to say, if it were up to Holt, it sounds like he would've scrapped the whole "promo video" idea for something much more straightforward. Finishing NBC's alternate ending teaser, the Captain's announcement gets straight to the point: "Brooklyn Nine-Nine is a show. It premieres on the National Broadcasting Corporation on January 10, 9 PM."

Everybody got that? According to E! News' Sunday report, the morning's pair of Brooklyn Nine-Nine promo videos will be followed by a third one, reportedly due to premiere later on in the evening during NBC's Sunday Night Football program. But, whichever way the network chooses to market the series' big-time premiere (which, so we're all clear, is only a little more than a month away!) for a third go-round, it seems entirely safe to say fans are already counting the days 'til the Nine-Nine returns for a sixth year.