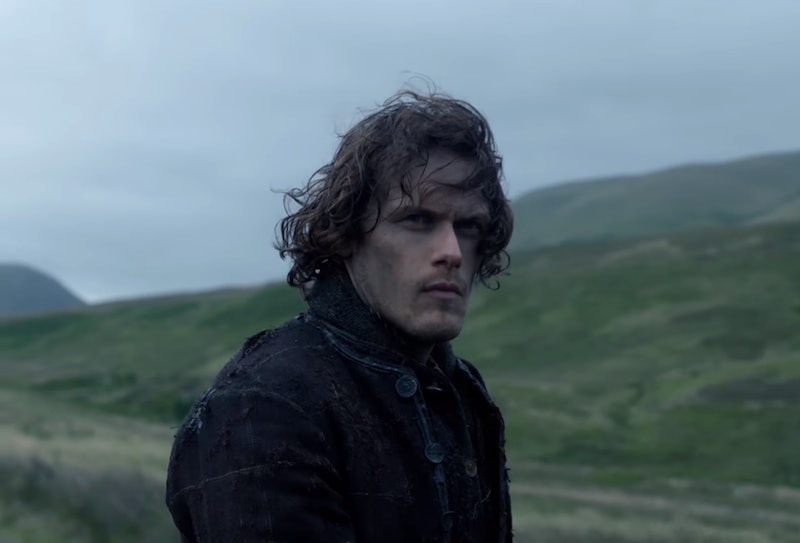 Droughtlander is almost over, but that doesn't mean star-crossed lovers Jamie and Claire will pick up right where they left off when the Starz series returns in September. New Outlander Season 3 footage teases the emotional toll the 20-year separation will take on the couple (and the fans). As the video's title suggests, Jamie and Claire will be living parallel lives at the start of the season. After returning to the '40s, Claire is seen raising her daughter Brianna, struggling to resume being Frank's wife, and furthering her career. Meanwhile, Jamie survives the Battle of Culloden, seems to swear off fighting, and sees visions of Claire everywhere. The yearning in his eyes as he sees a mirage of Claire on the battlefield in one scene is sure to leave shippers reaching for their tissues.

That seems to be what executive producer Ronald D. Moore is going for though. He told TVLine at the Television Critics Association press tour that the show is taking its lead from the book series on which it's based for Season 3. The goal is to make the viewers feel the weight of time passing before Jamie and Claire return to one another's orbit — something that definitely won't happen in the first five episodes of the season. Moore said,

"We decided on that parallel structure for the first half of the season. We never really varied from it. It felt like the right amount of time, and it felt like it was enough to build a want, a desire, in the audience to get Claire and Jamie back together so that they were really pushing for it and getting excited, but it wasn't dragging it out too long."

Enduring just one episode of the couple being apart is too much, so the first half of the season may very well be a tortuous experience for romantics.

Still, the moment Jamie and Claire reunite is sure to be a sweet one, and their respective lives appear to be full of exciting new developments. The new scenes reveal Jamie trying to put his life as a soldier behind him while sporting an impressive beard and a mane of shaggy red hair. Meanwhile, Claire gets to rock some cool '60s styles and watch her (and Jamie's) daughter graduate from school. The difference between Claire and Jamie's two worlds has never been quite so sharply drawn before. It should be interesting to see how Outlander brings them back together after two decades spent apart.

"This is a couple that lasts a lifetime," actor Caitriona Balfe promises in the video. That doesn't mean everything about their love story will be easy, but it does mean fans can be reassured the long-awaited moment when Claire crosses time to be with Jamie again will be well worth all the angst the couple will go through in the meantime.

More like this
Ava DuVernay Thought The 'Queen Sugar' Series Finale Felt “Really Satisfying”
By Brad Witter
'Tell Me Lies' Season 2 Is On The Way & The Cast Already Has Ideas For What's Next
By Gretchen Smail and Grace Wehniainen
The First Trailer For 'That '90s Show' Includes So Many Nods To The Original Series
By Jack Irvin, Alyssa Lapid and Grace Wehniainen
It May Be A While Before 'All American' Season 5 Drops On Netflix
By Grace Wehniainen
Get Even More From Bustle — Sign Up For The Newsletter