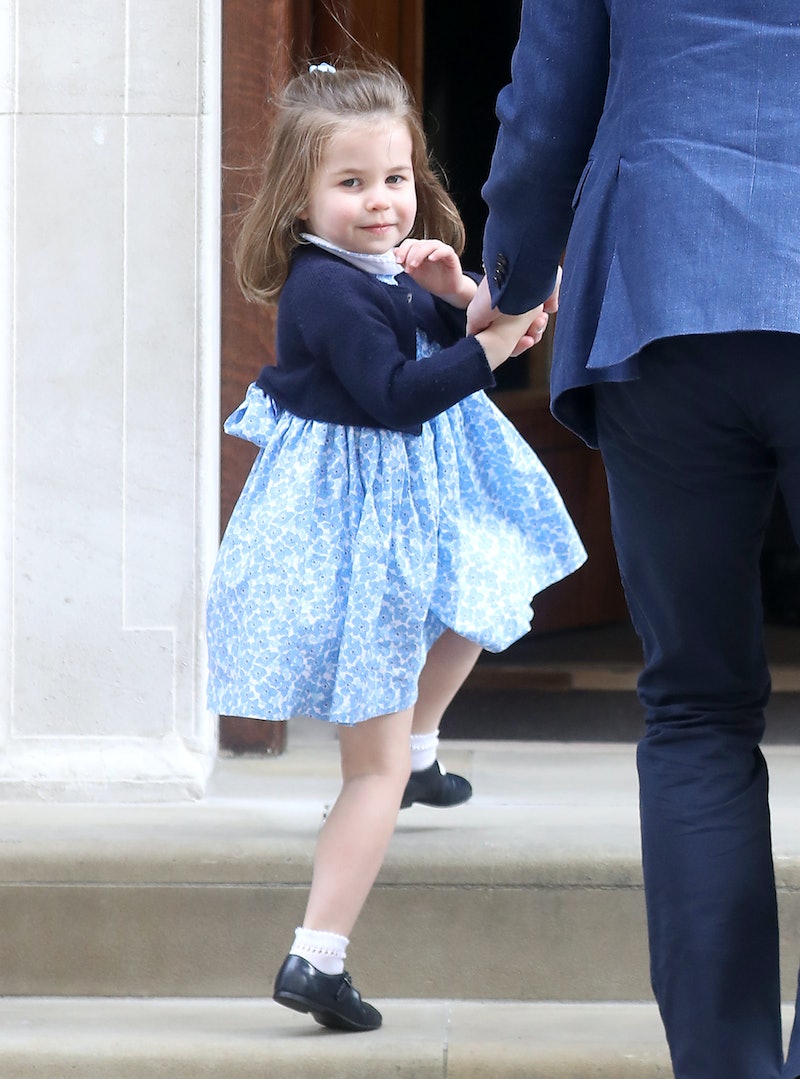 While the world awaits news of the birth of Meghan Markle and Prince Harry's first baby, there's another little royal getting ready to celebrate a birthday. Ahead of her fourth birthday on May 2, Kensington Palace shared new photos of Princess Charlotte. Of course, they're adorable, but royal fans on Twitter can't stop talking about how much Princess Charlotte looks like her dad, Prince William.

"The Duke and Duchess of Cambridge are very pleased to share three new photographs of Princess Charlotte ahead of her fourth birthday tomorrow," @KensingtonRoyal posted on Twitter. "The photographs were taken in April by The Duchess at Kensington Palace and at their home in Norfolk."

The new portraits of Charlotte come just a few days after Kensington Palace released new photos of Prince Louis for his first birthday, which were also taken by Middleton. These latest birthday snapshots of William and Kate's only daughter offer a sweet look at the little girl who is growing up so fast.

Seriously, looking at these is going to make you wonder where the time has gone and what you've been doing with your life. Probably, taking in a lot of royal content, which is nothing to be ashamed of since you know the reason Charlotte probably appears so grown up to us is because Middleton and Prince William didn't release a set of birthday photos last year.

These new snapshots feature Charlotte in the backyard running around, posing in a cute floral print dress, and rocking the perfect pony with a very smart looking sweater. It appears Charlotte is turning into a bit of a fashion icon, just like her mom.

But, what most fans couldn't get past was just how alike Charlotte and a William look. "She looks so much like William omg!" a fan named @BraveNewMatt commented.

Another user @OneEyeCrescent played a game of six degrees of who Charlotte looks like: "She looks like Prince William who resembles Princess Diana." While another fan tweeted that the answer was very clear: "charlotte is 100% william."

People pointed out that Charlotte looks like the Queen's mini-me. "Charlotte and her great-grandmother share the same striking eye structure – from their matching blue eyes to the arch of their eyebrows," the magazine wrote, "there’s no questioning their resemblance."

Many on Twitter didn't question it either. "I think the likeness is quite uncanny," Daily Mail's royal correspondent Rebecca English tweeted of Charlotte's resemblance to the Queen.

"The Queen and William," another fan named @Erika_Fern_ tweeted. "I think it's that part of the chin and cheeks that they have in common. But that smile is the same as William when he was younger."

Of course, other fans thought Charlotte was the spitting image of her mom in these photos. "The parallels are honestly too much for my heart," @RoyallyKate tweeted. "The Cambridge girls, ladies and gentlemen."

"Anyone notice that two out of the three pictures she's the image of William and The Queen," @nbyrne01 tweeted, "but in the picture of her in the grey top she's image of Catherine."

While there might be some debate on who exactly little Princess Charlotte looks like right now, let's all agree she's growing up so fast.