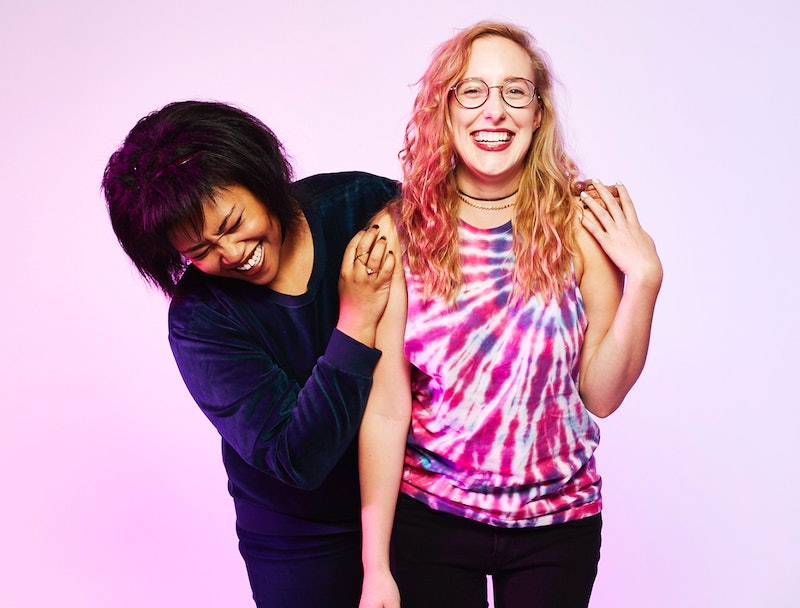 This past year has presented us with a harrowing number of events that have left many of us shocked and discouraged about the level of racism we face in this country. President-elect Donald Trump's nonstop slew of bigoted, prejudiced comments in 2016 was difficult to witness, but the violent racism that emerged from his supporters toward people of color was even more confronting. In the 10 days following the election, there were 900 reported hate incidents in which Black, Latino, Muslim, Jewish, and LGBTQ people were targeted. Furthermore, it's been devastating to see that many of Trump's top advisors and cabinet picks are individuals who have a recorded history of discriminating against people of color. Some of them even have loose ties with white supremacist groups.

We're worried about the future of our country, but we're especially frightened about the safety and wellbeing of non-white individuals across America. If we want to see any changes, our New Year's resolutions need to reflect our refusal to live in a society that's systemically and politically biased against people of color.

Bustle spoke with Dr. Laura Emiko Soltis, Executive Director of Freedom University, a school for undocumented students banned from public universities in the state of Georgia. "I am skeptical that white individuals can be true allies. But they can be co-conspirators," Dr. Soltis tells Bustle. She says working in solidarity with communities of color for the past decade as a biracial woman "has allowed me to better understand the challenges and possibilities of interracial solidarity." Here, she suggests what white people can do in 2017 to effectively stand with people of color and fight the bigotry they endure daily.

Here are five New Year's resolutions people of color have for white people.

A study published in the Association for Psychological Science revealed that there's an increasing number of white individuals who are more concerned with anti-white bias than they are with discrimination towards people of color. One person who participated in the survey actually complained that they had been "a target of racism and bigotry." This cry of victimhood is subtracting away from the sheer facts that people of color face lower life expectancy, heightened police brutality, and harsher criminal justice sentencing, just to name a few systemic injustices.

In 2017, if you want to see a different landscape forming in America, acknowledge your privilege — and encourage your white loved ones to do the same. "White folks need to take responsibility for themselves and others in the white community, and have difficult conversations with their white family and friends," Dr. Soltis tells Bustle. To ignore the suffering that people of color are forced to endure every day and instead convince yourself that reverse racism exists is to perpetuate the hatred that's being lived out in this country.

Use this next year to open an honest dialogue with other white people around you. Acknowledge that everything in the media, from advertisements to representation, is geared toward you, and that you'll never be turned away from a job or paid less because of your race. Building a more equal America starts with white folks understanding how their white privilege gives them a leg up in the world, and leaves people of color behind in the dust.

Verbal tirades and offensively stereotypical language aren't the only displays of racism that are harmful. There are many injustices that are woven into the American political and justice system that affect people of color in devastating ways.

"One of the most important ways that racism has transformed over time is that discrimination based on overt racial terms has been delegitimized and replaced by a system in which people of color are criminalized, and then discriminated against based on their criminal status," Dr. Soltis confirms. She tells Bustle it's of the utmost importance that white individuals learn what these systemic prejudices are if we have any hope of evoking change.

For example, one in every 15 black men and one in every 36 Hispanic men are incarcerated, while only one in every 106 white men are behind bars. People of color also face longer prison sentences than whites. The so-called War On Drugs, which gained momentum in the '80s and disproportionately targeted people of color, is largely to blame for these injustices. While blacks were snatched up from inner city neighborhoods and arrested for non-violent crimes, funding for drug prevention and treatment, as well as public housing, was significantly reduced.

Even when they're released from prison, people of color aren't even given back their full rights as citizens. They can't vote and they work for lower pay. The wages given to black individual out of prison grow at a 21 percent slower rate compared to a white person who was previously behind bars. So rather than taking everything you hear on the nightly news as gospel, explore these topics for yourself and read the truth about how American history led the way to this widespread discrimination.

"Racism is more about structural inequality and unequal life chances than it is about language, but language does matter," Dr. Soltis says. The words we use not only reflect our values, but they have the power to perpetuate the racism that exists in our society. "Be critical of language intended to mark people of color with assumed criminality," Dr. Soltis says. "One clear example: No human being is illegal. Period."

Using any kind of charged language also ignores the fact that our system is flawed and prejudiced, and instead wrongly depicts people of color as nothing more than "criminals" waiting to happen.

Let 2017 be the year when you shed this kind of language. Don't allow your friends and family to speak in this manner around you either. Making this resolution could also mean you think carefully about which media outlets you invite into your home. After all, most of us learn how to use this language from the channels we watch and the TV shows we keep company with.

You can't expect to gain an accurate perspective on race if you're only reading words that were written by or about white people. There's a stark shortage of books on the our shelves that come from people of color. A study conducted by the Cooperative Children’s Book Center at the University of Wisconsin found that, out of 3,200 children's books published in 2013, only 93 were about black people. This lack of diversity isn't uncommon in every other field of publishing.

At Freedom University, Dr. Soltis teaches classes in human rights and social movements. "Books that have transformed my students, and myself, include The New Jim Crow by Michelle Alexander, Undocumented by Aviva Chomsky, A People’s History of the United States by Howard Zinn, Racial Formation in the United States by Michael Omi and Howard Winant, and This Bridge Called My Back, edited by Cherríe Moraga and Gloria Anzaldúa," she tells Bustle. Looks like you've got your 2017 reading list sorted out.

Books like these will help you better understand how issues in America such as immigration and the criminal justice system intersect with racism and bigotry, and how this has a catastrophic effect on people's lives. After you're done, lend these books to another white person in your life.

People of color are underrepresented in just about every arena — politics, the media, universities. Sixty-five percent of elected officials in the U.S. are white men, yet they only make up 31 percent of the population. Out of all the films and TV shows made between September 2014 and August 2015, only 28.3 percent of the characters were non-white, but we make up almost 40 percent of the American population. To say there's a diversity problem doesn't even begin to scratch at the surface of this inequality.

Frankly, most of the people speaking on our behalf in the public sphere don't look like us, speak like us, or understand us. To make matters worse, in smaller-scale forums, such as everyday work or social settings, white people still take front and center to talk about race relations in our country. When you find yourself in these conversations this year, pause and instead give the platform to people of color. Ask them to share what their experiences, opinions, and complaints are (and really listen), rather than taking up the space yourself.