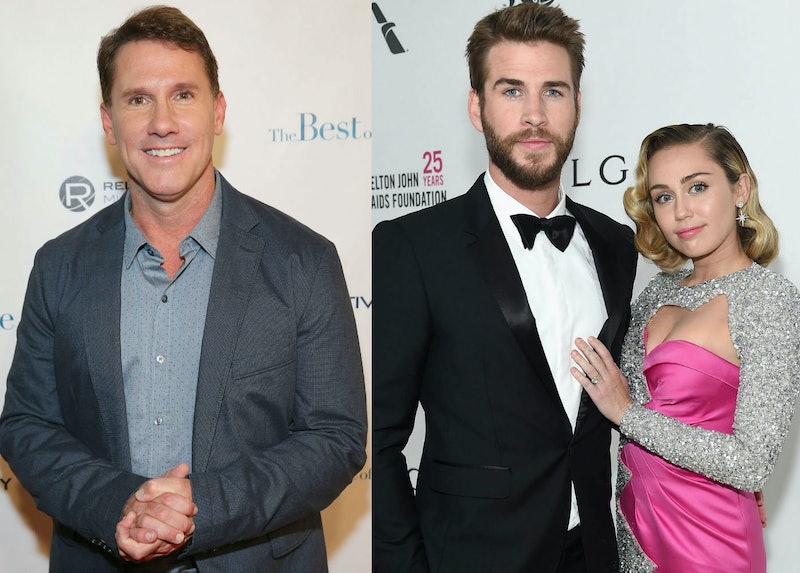 Fans of The Last Song, you're going to need tissues after you read Nicholas Sparks' tweet congratulating Miley Cyrus and Liam Hemsworth. The author took to Twitter on Wednesday to express his happiness over reports that the couple, who met on set of the 2010 film of the same name as Sparks' romance novel, recently got married. Actually, the novelist responded directly to a picture Cyrus tweeted on Dec. 26 of herself and Hemsworth at what might be their wedding. (Bustle previously reached out to the couple's individual reps regarding marriage reports and Cyrus' photos, but did not receive an immediate response.)

In reply to an image showing Hemsworth in a suit hugging Cyrus in a possible wedding dress, Sparks sweetly wrote,

"This makes me so happy. Congratulations @MileyCyrus and @LiamHemsworth. #TheLastSong."

How adorable is that? It gets even better. Cyrus replied to Sparks by tweeting him three red hearts. He really is just as happy as Last Song fans are for the couple, who have known each other for a decade now. It's hard to believe their romance started 10 years ago, but here they are — and maybe even as husband and wife.

Without Sparks, there wouldn't have been a Last Song for Cyrus and Hemsworth to star in together. Who knows if they ever would've met without the book and film, but in a way, the author is partially to thank for their love story.

Fans are even thanking Sparks for writing The Last Song and somewhat uniting the celebrity couple. As one person tweeted on Dec. 26, "It was ALL you...thank you for making it happen." Another follower wrote, "They’re together because of you man!" Someone else tweeted in all capital letters, "THIS IS ALL BECAUSE OF YOU THANK YOU SO MUCH."

Yeah, fans are really appreciative of Sparks right now, especially since it appears they officially said "I do" after all these years. Marriage rumors first circulated on Dec. 23 after photos and videos surfaced on social media of friends in attendance at their reported wedding.

Then, on Wednesday, Cyrus posted images with Hemsworth with the two wearing possible wedding attire and embracing like they just tied the knot. Next to a selfie of them kissing, she wrote, "This is probably our one - millionth kiss ...."

As you can see below, she captioned two pictures of them hugging, "12.23.18," which seems to confirm they really did get married right before the holidays. The third photo the former Hannah Montana star share (the one Sparks responded to) showed them hugging again and she wrote next to it, "10 years later ....."

Neither Cyrus nor Hemsworth have officially confirmed their rumored marriage with a statement, but it's certainly hard to ignore the many photos.

As for Sparks, this isn't the first time he's opened up about the couple. In January 2016, Sparks spoke about Cyrus and Hemsworth, watching them work together, and the ups and downs they faced romantically (they broke up in September 2013 and reunited in January 2016).

"They're both really terrific people, right? It was great watching them. You know, Liam was unknown... This was his first role, and of course, Miley was a superstar by that time, just so talented in so many ways... Really great to know that, you know, even after the breakup they remained friends."

He later added about the two first meeting, "I might tend to believe there was little bit of magic involved."

Sparks has always expressed his genuine happiness for the couple who brought two of his beloved characters to life, but it seems now more than ever the author couldn't be happier for Cyrus and Hemsworth.