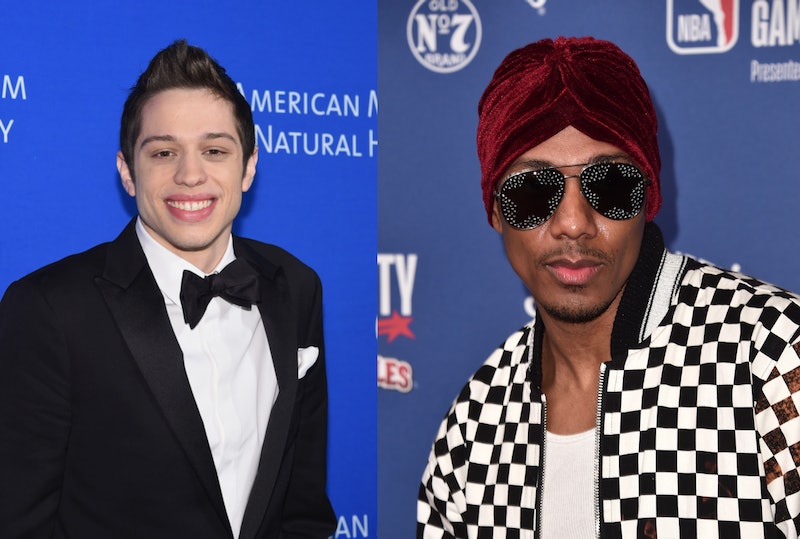 Ariana Grande and Pete Davidson have had quite a whirldwind romance, but before he reportedly proposed to Grande, Davidson got the go-ahead from one of his friends. In an interview with Entertainment Tonight published Thursday, America's Got Talent host Nick Cannon revealed he told Davidson to propose, seemingly confirming Grande and Davidson's engagement, revealing that the Saturday Night Live star gave him a call before he popped the question.

"He called before he was going to do it, and I said, 'Salud!'" Cannon, who was promoting his new Nickelodeon show, Drop That Seat, told ET. "He was really excited, so I was like, 'I love it, man. Keep it going.' Love is in the air."

Cannon, who married ex-wife Mariah Carey after just weeks of dating in 2008, can relate to the couple, telling ET, "To see them together... and I've been one of those dudes with one of those fantasy, fantastic relationships where you just go off and get married, so I was like, 'Do it.'" He added, "I've congratulated Pete. I haven't spoken to Ariana, but I'm happy for them."

The rapper and comedian even went so far as to compare the reportedly engaged couple to Noah and Allie of The Notebook and offered to officiate the ceremony, though he joked that might not be the wisest choice. "I think they're outstanding," he told ET. "They're young people in love and you can't knock that. It's like The Notebook. I'm up for all weddings. I'll officiate. I don't know how long they'll last if you let me do it, but I'm up for it."

Davidson previously appeared on Cannon's MTV show, Wild 'N Out, and according to Cannon, the two comedians have known each other for years. In fact, Cannon told ET that he actually helped Davidson get his start in the entertainment industry. Cannon said,

"I used to have a radio show in NYC in the mornings and this kid called in one day, 15 years old and said, 'I want to open up for you doing stand-up.' I was like, 'Yeah, all right, tell me a joke.' He told me a joke and I was like, 'This kid is pretty funny.' I took him on the road with me. Unbeknownst to me, even at that time, I didn't know about his history, that his father passed away on 9/11 and then just watched this young man have all of this weight on his shoulders and then just become this outstanding, hilarious young individual."

Cannon is not the only one of Grande and Davidson's friends who has seemingly confirmed the pair's engagement. Actor Glen Powell, who met Davidson while working on their new Netflix film Set It Up, and who previously starred alongside Grande in Fox's Scream Queens, told Us Weekly on Tuesday that he thinks they're great together.

"I've talked to Pete quite a bit, since we met on this movie, Pete and I have become very close," Powell told the magazine at the Set It Up premiere in Los Angeles. "I think they're a match made in heaven. I think it's actually going to work. Knowing them both separately I actually think it’s going to be great."

Powell continued, "I think they're both really wonderful and eccentric and I think they complement each other in a lot of ways. ... You never know when love is going to come together, but I think that one is going to be great." He also said that he would definitely be attending the wedding.

While neither Davidson nor Grande has officially confirmed the news, Grande reportedly wore her engagement ring onstage during a performance at The Songwriters Hall of Fame Induction and Awards Dinner on Thursday night, according to E! News.

Based on the comments from their friends so far, it appears Davidson and Grande are perfect for one another. Just like The Notebook, right?