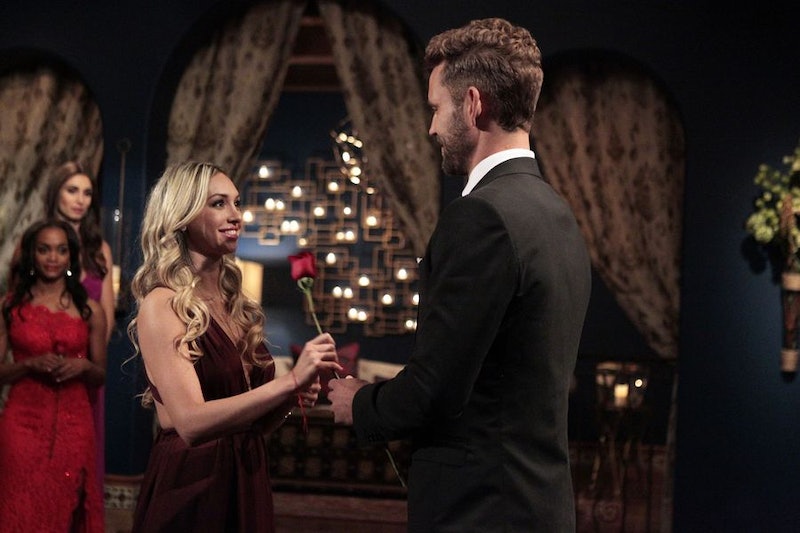 The moment I’ve been waiting for all season has finally happened on The Bachelor — ABC has teased Corinne coming into Nick’s room for a nightcap (and something more) all season long, and finally, we patient Bachelor viewers have been rewarded with what really happened. Unfortunately, it wasn’t that juicy! Nick turned down Corinne's advances on The Bachelor, and it was a big moment for his season and his evolution as the Bachelor.

It went a little something like this — Corinne, troubled by the fact that she hasn’t had a one-on-one date — decided to take things into her own hands and visit Nick’s hotel room. She did that whole “my heart is gold, my vageen is platinum” thing, and she and Nick went into the bedroom for what sounded like some heavy petting. If it’s one thing that I hate on this show, it’s the mic-ed up smooching sounds that most disturb me. Anyway, because Nick and Corinne were still wearing mics, Nick and Corinne were heard getting cozy Nick stopped her, telling her that they couldn’t go any further, that they had to move slow, that it would be bad if the other women found out, that he didn’t want to go through all that again. “All that” is the time that he and Kaitlyn Bristowe had sex on her Bachelorette season before the Fantasy Suite dates and the you-know-what hit the fan.

Do I think that Nick wanted to have sex with Corinne? Totally. Did he stop because of optics? 100 percent. I think Nick only halted activity with Corinne because he knew how things turned out on Kaitlyn's season and how it made people and the other contestants think about him (and her).

Nick thought with the right head in this situation, and he even told Corinne that she shouldn’t feel bad about trying to take things to the next level. She shouldn’t, absolutely, but it’s good that Nick, who is pretty sex-positive to begin with, assured Corinne that being herself wasn’t wrong – it just wasn’t right for him right then.