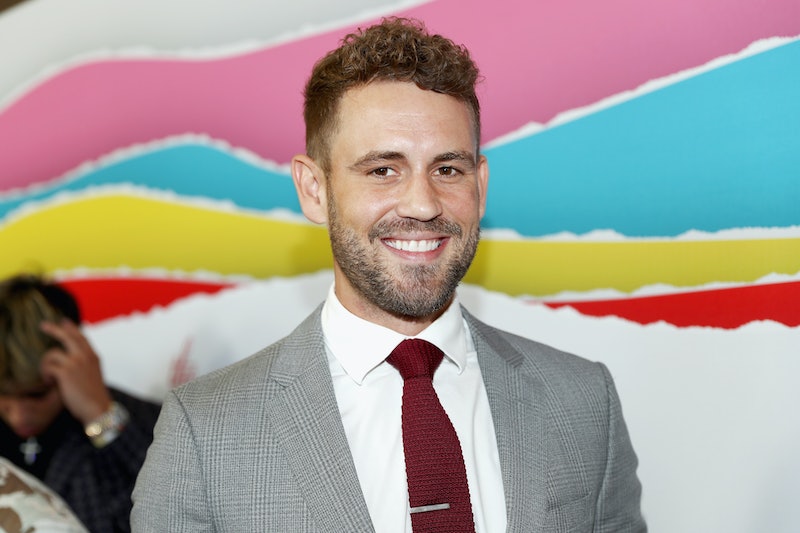 Another member of Bachelor Nation is ready to share his "strong opinions" on all of the drama going down in Paradise. On the August 13 episode of his podcast, The Viall Files, Nick Viall called out Blake's decision to release texts from Caelynn, describing the Bachelor in Paradise star's actions as "nasty," and accusing him of planning to share the private texts for weeks before the BiP premiere.

According to E!, the former Bachelor admitted that he felt that both Caelynn Miller-Keyes and Blake Horstmann looked bad in the wake of their drama in Paradise — which centered around Caelynn's claims that Blake had "ghosted" her before Paradise and made her feel like she was a "dirty secret" — before revealing that Blake knew what he was doing when he decided to share the private texts. "I know by talking to a lot of people over the weekend that Blake admitted, 'I know that she's going to look bad,'" Nick claimed. "I know that he threatened people about releasing these text messages for months in anticipation with this coming up, which makes it all that more premeditated." (Bustle reached out to Blake for comment, but did receive an immediate response.)

Nick also refuted Blake's claim that he didn't think Caelynn would get attacked by Bachelor fans, saying, "Then he ended up deleting it when it got really nasty. But it's not like he didn't realize — this whole idea 'I didn't think this would affect her the way it did' — he knew. He admitted to it. There's texts out there of him saying this."

"The problem I have with this whole scenario is Blake tried to show up to Paradise and pretend to be someone he's not," Nick explained. "He wanted people to keep thinking he was, say, more Ben Higgins than some other f*ckboy and it didn't go his way and then he decided to retaliate — and it was a retaliation to release these text messages."

Nick also claimed on The Viall Files that Blake talked to multiple members of Bachelor Nation about possibly releasing the texts, trying to see whether or not it would help him save his reputation amongst fans. Kevin Wendt — who appeared on last year's season of Bachelor in Paradise — seemed to confirm this in his comment on Blake's Instagram post about the drama from Aug. 6, but he saw it as a way to address Blake's "anxiety" about the situation. "I know I told you last week posting these might not be the best idea," Kevin wrote in his comment, "But as a friend I just want YOU to be happy and I know your anxiety was about to erupt. So I get it. and I'll support you regardless."

Bachelor in Paradise host Chris Harrison also claimed that Blake had talked to multiple people about releasing the texts in a recent interview with The Hollywood Reporter, describing Blake's posts as "a really bad idea." He explained, "I know there were people in his life who were urging him not to do that and I wish he had listened to their advice, because there’s just no way you are going to come out looking good and there’s no way you are not going to just hurt Caelynn."

Caelynn herself weighed in on the drama shortly after Blake took down the texts on Aug. 7, explaining in a post on Instagram, "I am not here to deny those text messages or the conversations that took place," but adding that "things got taken out of context on the show, and a large part of the story is missing." In addition to apologizing for her harsh words on the show, Caelynn also wrote that she tried to work through everything with Blake face to face, but "I didn't get the same respect in return." She continued, "I am absolutely mortified our private texts were put out there for the world to see and judge by someone who I trusted and consider a friend nonetheless."

No matter who's side members of Bachelor Nation are taking in this headline-grabbing drama, it appears as if there's one thing that everyone can agree on: releasing Caelynn's texts probably wasn't the best idea.