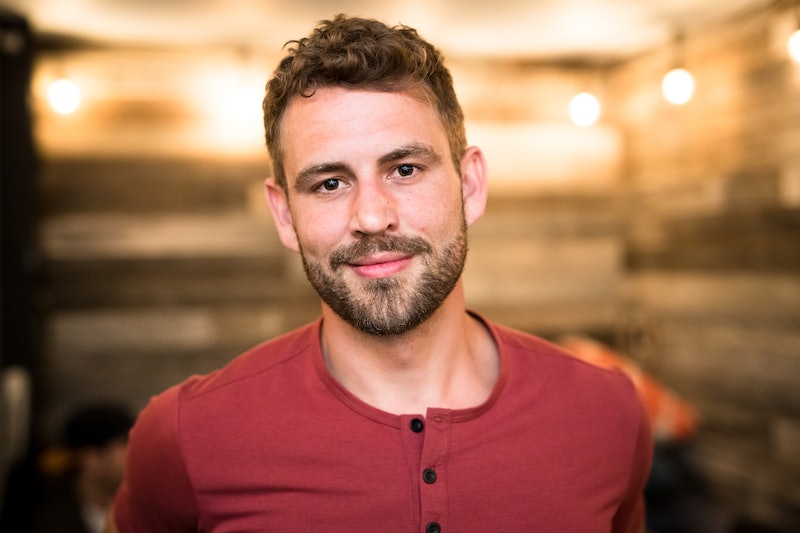 As The Bachelor finale approaches, everyone has a theory about how this season will end, and that includes Bachelor Nation alums. In the new episode of Us Weekly's Here For the Right Reasons podcast, Nick Viall shared his Bachelor finale theory, and revealed he's betting on a surprise ending, with Hannah Ann Sluss getting Peter Weber's final rose — eventually. Although Madison Prewett is the current frontrunner (well, as much as there can be a frontrunner in a season when even the Bachelor himself reportedly doesn't know how things will end), Nick is betting that this season's twist will result in Hannah Ann winning Peter's heart.

The Bachelor Season 21 star is predicting an ending that's reminiscent of Colton Underwood's season, but with a new wrinkle added into the last minute declaration of love. "My theory was Madison leaves … Peter's distraught over this," Nick said. "Meanwhile Hannah Ann is just there like, 'I'm doing everything right!' And she's finally like, 'Screw this, I'm out.' And Peter's starting to realize, 'Oh, it’s been Hannah Ann the whole time. It's always been you.' And then he's kind of like begging for her."

Nick's scenario is certainly well thought out, but it doesn't quite have the oomph that ABC is promising for the unguessable ending. Then again, neither does the popular theory that Madison leaves and then has a last minute change of heart à la Cassie Randolph in Colton's season, which is why Nick is going with his Hannah Ann theory. "I’m feeling like, maybe, it's got to be something else," he said. "That's why I'm going against the grain."

Given the hype surrounding the end of Peter's season, there are plenty of wild theories flying around, but it's the wildest theory of all that's beginning to look like the most plausible. In a March 7 interview with Variety, ABC executive Rob Mills commented on the rumor that Peter will end up with Bachelor producer Julie LaPlaca. "He is very, very close to her. She's the producer who is sort of his day-to-day producer, so she's there with him, and she knows Peter very well and knows his family very well," he said. "They're all very fond of her. That is all I will say."

Over the past few months, Peter and LaPlaca have been spotted spending time together. Most notably, she reportedly spent New Year's Eve with him and his family, per Entertainment Tonight. Of course, this could simply be due to her being his point person for the show. For his part, host Chris Harrison doesn't seem to be buying the producer theory. Earlier this month, he told ET that it "seems much ado about nothing to me."

If The Bachelor isn't planning on throwing a curveball and having Peter end up with one of his producers, then Nick's theory could make sense. Maybe Hannah Ann walking out on Peter is the wake up call he needs to realize she's the one for him. Or maybe Nick is just as clueless as the rest of us.

More like this
Hannah Ann Got Engaged 3 Years After 'The Bachelor' & The Proposal Was Dreamy
By Grace Wehniainen
Brianna Revealed Why 'The Bachelor' Premiere Was Tougher For Her Than You Saw On TV
By Brad Witter
Bachelor Zach’s “Dream Job” Has Nothing To Do With His Work In The Tech Industry
By Brad Witter
10 Photos Of The Wildest Limo Arrivals From 'The Bachelor' Premiere
By Brad Witter
Get Even More From Bustle — Sign Up For The Newsletter
From hair trends to relationship advice, our daily newsletter has everything you need to sound like a person who’s on TikTok, even if you aren’t.