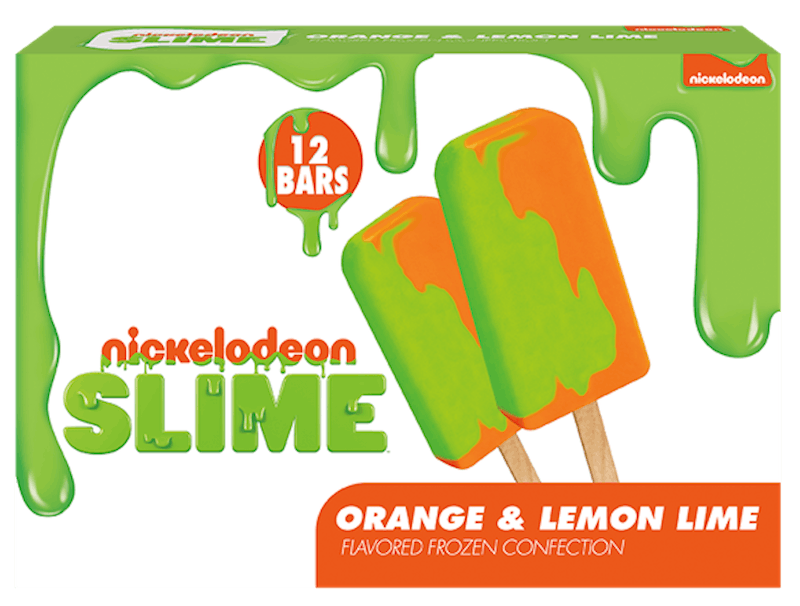 Summertime provides plenty of opportunities to feel nostalgic. The warm air. The ice cream trucks. The sitting around in front of your window unit AC instead of going outside. And now, there's a new way to take it back to childhood (or however old you were in the '90s): Nickelodeon Slime ice cream cups and frozen dessert bars. The treats are about to hit shelves as a hot weather dessert for anyone who misses Double Dare or Slime Time Live... or just really likes ice cream.

The desserts will be sold exclusively at Walmart starting on Monday, April 29. The ice cream is vanilla ice cream with green frosting swirls (aka slime), and comes in those cups with the peel-off lid that were a staple at every kids' birthday party in the '90s. The bars are orange and lemon-lime flavored in a swirling green and orange colors that are reminiscent of the color of slime and of Nickelodeon's logo. A pack of 12 ice cream cups will go for $4.97, and a box of 12 bars will cost $2.97.

While these treats are just about to hit shelves now, they're far from the first Nickelodeon-themed desserts. Popsicle previously released Nickelodeon Green Slime Ice Pops that were popsicles filled with an edible slime. There have also been several character and show-themed popsicles, including ones for Jimmy Neutron, Rugrats, and SpongeBob SquarePants. And in 2017, Reptar Bars — the candy bars featured on Rugrats — went on sale at the '90s-appropriate location of FYE stores. (Yeah, those are still around.)

On the more savory end of the food spectrum, Walmart also teamed up with Nickelodeon last year for Slime Sauce, which was basically bright green ketchup. Not only was it the slime version of ketchup, but it also brought to mind those Heinz EZ-Squirt ketchups from 2000 for double the nostalgia.

While some of these foods might not sound so appealing anymore, they probably are all still better than eating the actual, original slime, which technically was edible. Delish reported in 2017 that Nickelodeon game show and Unwrapped host Marc Summers revealed what slime was originally made of. "It started off as vanilla pudding, apple sauce, green food coloring, and a little oatmeal," he told Tech Insider. "And that was our slime." The slime he's talking about originated on the show You Can't Do That On Television, which premiered in 1979. And while slime has been an iconic part of Nickelodeon ever since, the slime used today during events like the Kids' Choice Awards is far more smooth looking, so it seems the recipe must have changed.

As a sophisticated adult, though, you're probably not looking to make actual slime (unless you are around kids), so if you want to try out the very classy, grown-up treat of slime-themed ice cream cups and frozen bars, be sure to check out your local Walmart when they hit shelves. And enjoy explaining what it means to anyone who's too young to remember, too.