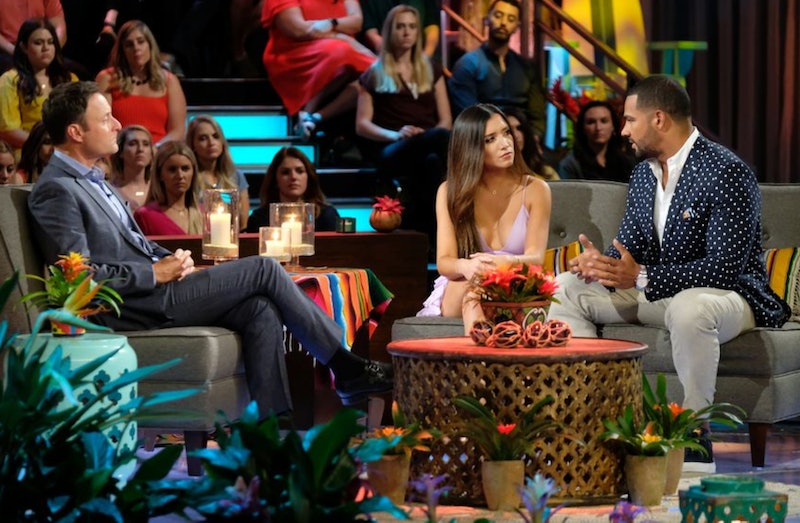 Nicole Lopez-Alvar and Clay Harbor’s Bachelor in Paradise journey ended not with a proposal, but a nod to another reality star's social media account. On Wednesday, Sept. 18, Nicole revealed that the BiP quote about the ocean that she dropped in the middle of her breakup conversation with Clay was inspired by Khloé Kardashian. When Nicole said, "I deserve a love that is so deep the ocean would be jealous," she was referencing something she saw on Khloé's Instagram page.

The morning after the BiP finale, Nicole tweeted,

“LMFAO ok, ok you guys are gonna die... I stole my ‘I crave a love so deep the ocean would be jealous’ line from @khloekardashian’s old INSTAGRAM BIO. I didn’t plan it. I straight up looked into that beautiful ocean, realized my worth, and blurted it out! #BachelorInParadise”

The quote may no longer be in Khloé's Instagram bio, but it is still featured in a caption for a set of photos she shared last year. “‘I crave a love so deep the ocean would be jealous’ one of my favorite quotes,” she wrote in a post that went up on Nov. 5, 2018. Khloé also referenced the quote when she tweeted out a now-deleted IG post in 2013. It's unclear who wrote or said the quote originally, but the line has been attributed to multiple people, including Pablo Naruda and Rumi.

Clay and Nicole experienced a majority of BiP Season 6 as a couple, but as the season closed in on Engagement Day, she worried she was more serious about the relationship than he was. After spending Fantasy Suite night apart so they could really think about what they wanted for their relationship, Nicole and Clay reunited for BiP Engagement Day. Standing on the designated BiP engagement spot, Nicole told Clay that she’d loved him since their first kiss and could “see the future” with him. She wanted to make sure they were in the same boat before a proposal happened, so she asked Clay point-blank if he loves her. He said he was “not there yet.”

Clay told her on the show that he would like to pursue a relationship with her in the real world, but was “not ready to move in together and get down on a knee.” He said he was "starting to fall in love" with her and would like to "take things slow," acknowledging that the conversation was not living up to Nicole’s expectations.

He went on to say that he believes she deserves more, and she said the iconic quote. He suggested they try to figure things out, but she seemed to have her mind made up. "I have to do what's best for me right now, and I can't tell people that we're together knowing that you don't love me back," she said. With that, their relationship seemed to end there on-screen.

After the finale, Clay and Nicole addressed about their split on social media. Nicole tweeted that she grew from the experience and has moved on, writing, "we are ALL worthy of our own happy ending. Whether that be with a partner or not. ‘Cause we’re our own soulmates." In a note Clay shared on Twitter, he said he thought they were going to leave Paradise together, but it didn't pan out because "she wanted something else." He also wrote in the tweet that he is "happy Nicole has moved on" and that "she deserves happiness."

Their time on Paradise ended on a bittersweet note and with a famous quote.