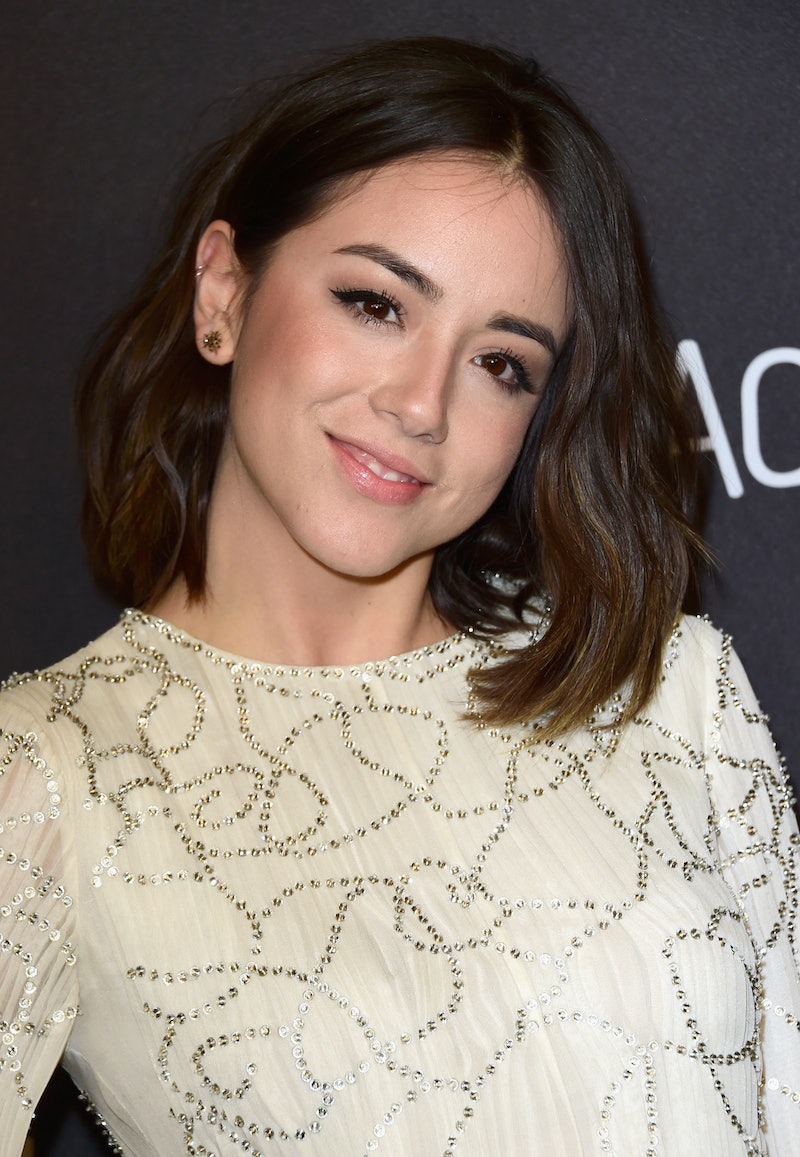 Chloe Bennet has starred in Marvel's Agents of S.H.I.E.L.D. for four years, and guess what: She's been half-Asian this entire time. Shocking right? Well, if you watch the show or know anything about Bennet IRL, it really shouldn't be. And yet Bennet's decision to change her Chinese surname years ago when she moved to Los Angeles more recently led the actress to reportedly receive hate — despite how much she's done for the Asian community both on-screen and off. Which is every bit as messed up as the fact that she had to change it in the first place.

Before she came to Hollywood, Bennet was a pop star in China under her given name, Chloe Wang. After her move, her character, Skye/Mary Sue Poots/Daisy Johnson, on S.H.I.E.L.D. was established in Season 2 as being half-Asian, half-white. And, in addition to playing one of the only leading half-Asian characters on television for four seasons, Bennet also founded (RUN) Represent. Us. Now., an organization meant to boost and organize the Asian American Pacific Islander community. But she was still recently forced to defend her connection to her Asian heritage because she did all of this under the name Chloe Bennet.

"Changing my last name doesn't change the fact that my BLOOD is half Chinese," she reportedly wrote in a since-deleted Instagram exchange, after a fan reportedly lashed out against her name change. "It means I had to pay my rent, and hollywood [sic] is racist and wouldn't cast me with a last name that made them uncomfortable."

This isn't the first time Bennet has opened up about changing her last name to get her foot in the door. "When I first got to L.A. I was told I wasn't 'white enough to be the lead or Asian enough to be the best friend,'" she said in a 2016 interview with Teen Vogue. That same year, she revealed to the Daily Beast that she booked her first post-name change audition — a multi-episode arc as Hailey on Nashville. The fact that Bennet was pushed to defend her decision shows that audiences are clearly still confused about the existence racism in Hollywood and, in particular, the challenge this places in front of mixed race actors.

The actor's statements about Hollywood racism aren't just a critique of the industry, but also of the audiences that, intentionally or not, endorse it. Bennet was pushed to change her name because, to put it simply, many people are still confused by the existence of mixed race people, especially those not easily put into a box. Many mixed race actors end up playing multiple ethnicities over their careers, completely at the whim of what ethnicity casting directors think audiences will accept them as. Just look at Vanessa Hudgens, who got her big break playing the Latina Gabriella Montez in High School Musical and only recently got the opportunity to play a character who explicitly identifies herself as half-Asian in Powerless. And at the same time as S.H.I.E.L.D. premiered, fellow Hapa (half-Asian) actor Janel Parrish, who had a major role on Pretty Little Liars, played a character whose ethnicity was never explicitly explained or stated.

When Agents of S.H.I.E.L.D. premiered in 2013, I assumed that the showrunners were passing Bennet's character, Skye, as white. I could immediately tell that Bennet was Hapa because I am, and, contrary to the assumption of some close-minded fans out there, her last name did not convince me otherwise. (I hate to break it to you, but half-Asians can have Asian mothers and white fathers, too.) However, I understood that Skye was an orphan who knew nothing about her ethnic heritage. Considering the fact that I had never before seen a television show on a major network with a lead character actually identified as Hapa, and considering that the show already had one Asian female lead in Ming-Na Wen (Melinda May), I figured they'd leave Skye's ethnicity a mystery.

Needless to say, I was shocked when I realized that the show was going to embrace Bennet's heritage by making her character also half-Chinese and half-white — regardless of the actor's last name.

But I want to be clear: Even if Bennet had kept her Chinese last name and still gotten the role of Skye, it would not make her impact as a character any more or less important. When I was a teenager, a friend, who was also biracial, learned that my last name was Wong. She looked at me, confused, and asked, "What is that?" Basically, I know firsthand what it must have been like for Bennet to walk into an audition with the last name Wang, only to be met with questioning glances and backhand comments that all amounted to the same message: "You're not Asian-looking enough for your name."

If I was an actress, I'd probably have to change my name, too. And, though it makes me sad, I'm OK with that — because I know what Bennet knows. My last name does not make my heritage any more or less valid. It doesn't change my ethnic identity or my experience. And, above all, Bennet changing her name doesn't make her any less of a hero to Hapa women across the world. Because thanks to her work on Agents of S.H.I.E.L.D., we get to see ourselves onscreen in a new and empowered way.

More like this
Johnny Sibilly Makes “Gay Shit”
By Hugh McIntyre
Mel C, Courtney Act, & Rob Beckett Will Be Judges On ITV’s New Drag Show
By Sam Ramsden
Viktor Hargreeves’ Coming Out Scenes Are The Sweetest Part Of Umbrella Academy Season 3
By Gretchen Smail
Julie Andrews Revealed A Surprising Behind-The-Scenes 'Bridgerton' Detail
By Grace Wehniainen
Get Even More From Bustle — Sign Up For The Newsletter