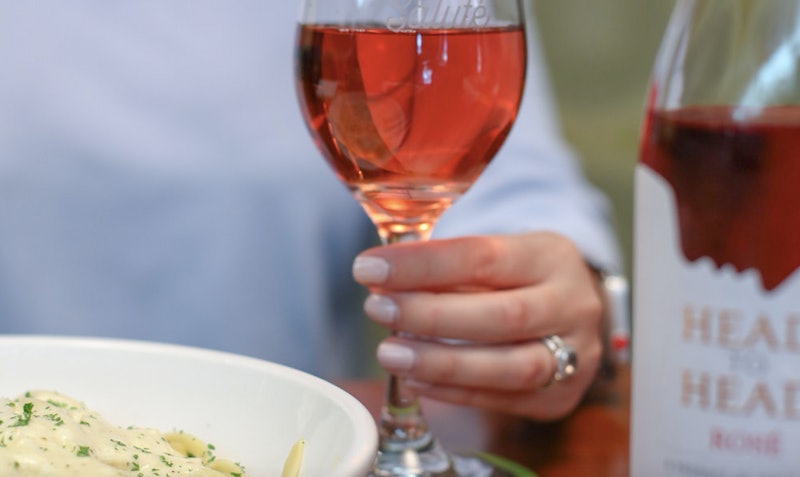 Proving that it's not a regular chain, it's a cool chain, Olive Garden has yet again come out of the woodwork with a menu addition so gloriously millennial that you pretty much have no choice but to lean into it, body and soul. This time, though, the addition doesn't involve a semi-monstrous, Icarus-flying-too-close-to-the-sun food combination like it has in the past; this time, Olive Garden is introducing an exclusive rose wine, meaning you can officially rosé and breadstick all day. (Breadstick can be used as a verb in the context of Olive Garden, don't @ me.)

According to Delish, the house rosé, called Head to Head Rosé, will hit Olive Gardens nationwide starting May 29 — meaning you have the entire long weekend to emotionally prepare yourself for what is sure to be a turning point in millennial culture, if not the way you experience bottomless salads forever. The rosé comes by way of Rocca delle Macíe winery in Tuscany, created by siblings Giulia and Andrea Zingarelli.

“Rosé is trending now,” said Olive Garden's direction of beverage strategy, Robyn Albert, in a press release. “We wanted to launch our new wine in summer because rosés are refreshing in hot weather. And bringing in Giulia, a female millennial herself, made for a perfect partnership to develop the new wine.”

Here's to millennial women crushing the rosé game, y'all. And on a far more vain but still relevant note, LOOK HOW PRETTY.

And boy howdy, has Olive Garden been pulling out the stops lately. With reports that millennials are "endangering" chain restaurants — apparently we're more attracted to fast-casual, delivery, and home-cooked options than the beloved chains of yore — it seems that Olive Garden is more than willing to pull out all the stops to keep us coming back. In addition to its famed Never Ending Pasta Pass, which has been available seasonally since 2014, Olive Garden has introduced some truly daring hybrids as of late. This past February we were graced with the advent of the Meatball Pizza Bowl, which was — be still my heart — a bowl shaped out of pizza crust, and then filled with sauce, cheese, and meatballs to its glorious brim. Just before that came the Loaded Pasta Chips, a Super Bowl special which were instantly dubbed "Italian Nachos" by a drooling internet.

But the pièce de resistance — the dessert that haunts my dreams, and taunts me for being too much of a coward to brave the Olive Garden in Times Square — was undoubtedly July 2017's Cookie Butter Cake, which was a buttery, caramel-y cake fantasy that I can't think too long about in the office if I don't want to get in trouble with HR.

Anyway, hopefully this is luring my fellow millennials out in suburbia where Olive Gardens that aren't smack dabble in the middle of an apocalyptically crowded tourist hellscape into the chain, because they are truly Doing The Most. And to be fair, so are we — between the Olive Garden fan fiction that went viral last year, and the parents that literally named their human child in honor of the chain, it seems that the love is more than mutual. While we're on the topic of that baby, can someone please send those parents a bottle of the new rosé? I feel like they definitely earned it.