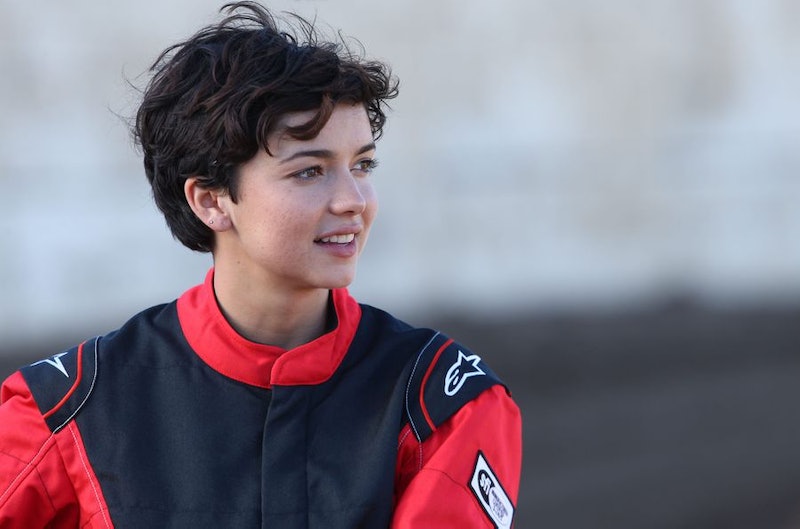 Just three episodes into Arie Luyendyk Jr.'s season of The Bachelor, there are already a few standout contestants on the show. There's Krystal, who's taken somewhat of a villain role. Chelsea, who... has also taken somewhat of a villain role. And there's Bekah, who seems to be the dark horse of the season. Despite the huge age difference between her and Arie, Bekah has the upper hand on The Bachelor when it comes to their relationship, and it's really setting her apart. It seems the more Arie gets to know her, the more she seems to scoot ahead of the competition.

From the beginning of the season — when Bekah made her entrance in a classic car — Arie has been intrigued by her. Obviously, she's beautiful, but that's hardly her best quality. From what we've seen of her on the show so far, it's pretty clear that she's full of confidence. And although she seems really fun-loving, she also knows when to be serious and how to be taken seriously, and none of that has been lost on our Bachelor. Even during that first cocktail party where she and Arie chatted in the back of the car she drove to the mansion, their chemistry was palpable, so it's no surprise she's been scooping up roses week after week.

In case you haven't figured it out yet, Bekah isn't your typical Bachelor contestant. Where most of Arie's contestants sport long, blonde hair (or are named Lauren) Bekah has a short, dark brown cut. She doesn't seem bothered when other women take their time with Arie; it's like she's actually managed to grasp the fact that's just how The Bachelor works while a lot of women on the show understandably struggle with seeing "their" man kiss someone else.

And even though Bekah is 22 years old — the youngest contestant on the show this season — and Arie is more than a decade older than her at 36, it doesn't seem to make a difference. (Although going into Monday night's episode, he doesn't know her exact age yet.) She definitely exudes a youthful quality, but that also seems to be something Arie loves about her. She's already one of his clear favorites, and why that might be was made very obvious during a moment in last week's episode.

When they had the chance to talk during the cocktail party, Bekah made where she stands clear, even pointing out the fact that she doesn't need him —even though other contestants would probably do the opposite.

“I think you know that I don't need you," she said. "You say you’ve been attracted consistently to people who need you more than you need them. It’s scary to be with someone who doesn’t need you to complete them.”

Bekah's right. It's nice to feel like you're the piece someone else has been missing in their life, but not feeling needed can be tricky. However, two independent people who add extra elements to each other's lives can create the healthiest of relationships, and that's what Bekah's offering. Even though she's young, she seems incredibly OK with who she is. It's easy to believe her when she says she doesn't need Arie. And so far, it looks like that fact has only made Arie like her more.

There are a few other women who have already piqued Arie's interest. He's definitely into Krystal and seems to have a good thing going with Tia and the other Becca so far, too. The idea of The Bachelor is, in its simplest form, a group of women chasing after one man, but for once, Bekah seems to be making Arie want to chase her. And if he does end up chasing after her when there are more than a dozen other women still chasing after him, that's huge.

If Arie's proven anything this season, it's that he's not messing around. Last week alone, he sent home two women outside of the rose ceremony — Annaliese, based on an ill-fated group date conversation, and Lauren S., during a one-on-one date. He's not keeping anyone around he doesn't see a future with, and knowing how seriously he's taking the Bachelor process, it will speak volumes if Arie keeps Bekah around after he finds out her age.

On Monday night's new episode, Bekah's set to tell Arie how old she is for the first time, and his reaction will say it all. It's still early in the season, so obviously, anything can happen. But if Bekah and Arie keep building on the foundation they've created, there's a good chance she could be around for that final rose.