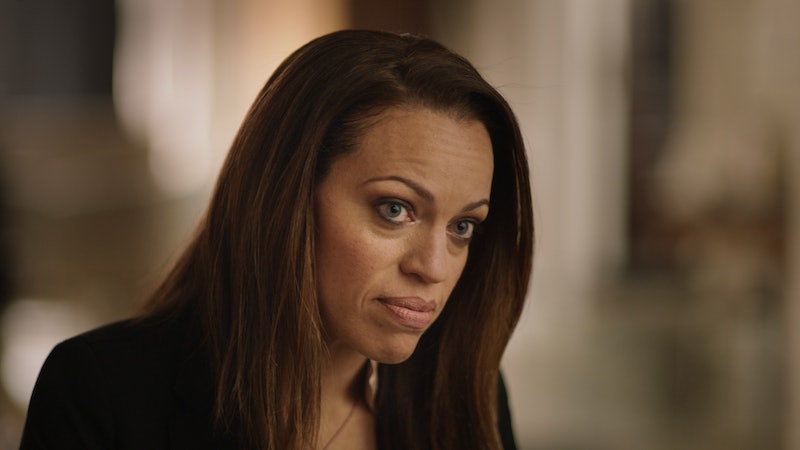 Drew Dixon once lived around the corner from Biggie Smalls. The friends were both music lovers looking to make it big in the industry. As Biggie rose in the rap game in the early-1990s, Dixon dove into the world of A&R (artists and repertoire), those responsible for scouting and signing new talent.

Dixon is one of multiple women who have accused music mogul Russell Simmons of rape or sexual assault, and the incident, she tells Bustle, deterred her from continuing her career in her beloved industry. (A legal representative for Simmons did not respond to Bustle's request for comment In the past, Simmons has consistently denied all allegations against him.) Dixon tells her story in further detail in the new documentary On the Record, which is available to stream on HBO Max now.

As Dixon reveals in the film — and in the New York Times story in which she first came forward with her allegations against Simmons — she was working for Simmons' Def Jam Recordings when, after a night out at Bowery Bar, she ran into him on the street while on her way to get cab money from an A.T.M. He insisted that she come up to his apartment while he ordered her a car, dangling the promise of a new demo tape she could take home. Once in his apartment, Dixon alleges that she directly rejected Simmons' advances but he wrestled her to the bed and proceeded to rape her. She blacked out; she says she had not been drinking and did not think she had been drugged, but that she disassociated as a way of survival.

Shortly after, Dixon quit her job at Def Jam and began working under Clive Davis at Arista Records. However, when Davis retired in 2000, Dixon started working with record exec L.A. Reid. According to Vanity Fair, after Dixon refused Reid's advances, he began pushing her out. Reid also left Epic Records in 2017, after being accused of sexual harassment by another former employee. In 2018 he addressed Dixon's allegations saying, “If I ever did or said anything that was misinterpreted or somehow created an uncomfortable workplace environment I apologize unreservedly.”

In 2002, Dixon left the music industry to attend Harvard Business School. She didn't return to the industry until 2018, when she founded independent label called The 9th Floor.

While Dixon is the predominant voice in On the Record, when they first started filming the doc, she hadn't even decided if she was even going to let The New York Times run her story — let alone appear in the film.

"I felt so intimidated going up against two Goliaths in the industry as a stay at home mom with very few resources," Dixon says ahead of the premiere. "I did feel safer knowing that at least I was being watched [by the documentary team]."

Telling her story to the Times or on camera for the film, she says, wasn't the hard part. "I had in many ways buried this and detached myself from it emotionally so that I could tell the story without connecting to the pain," she says. But coming forward brought all of those emotions to the forefront. "[It made me] realize it was keeping me broken, because there were parts of my identity, my vitality, my swagger, my creativity that were also buried in the same place where I buried this story. So what's happened for me in telling this story publicly, it's allowed me to fuse myself back together and become whole again."

Still, another lingering fear has remained for Dixon: In coming forward, she would be accused of trying to bring down black men.

"I have feared from the very beginning when I came forward that the black community would misunderstand my motives and would cast me out of my own beloved community," she says. But what has kept her going is the sisterhood she's found amongst her fellow survivors. "I moved ahead with my head held high, feeling proud to be a part of this [film] and feeling proud to stand next to Sil Lai and Sherri in support of a film that I think is so important not just for survivors, but for the black community."

More like this
Here’s Everything Coming To & Leaving Netflix In February
By Jake Viswanath
Yes, You Can Stream ‘To Leslie’ In The UK Now
By Sam Ramsden
11 Movies To Watch At The 2023 Sundance Film Festival
By Chloe Foussianes
Twitter Is Identifying With Sally Field & Jane Fonda’s Friendship In New Viral Video
By Jake Viswanath
Get Even More From Bustle — Sign Up For The Newsletter
From hair trends to relationship advice, our daily newsletter has everything you need to sound like a person who’s on TikTok, even if you aren’t.