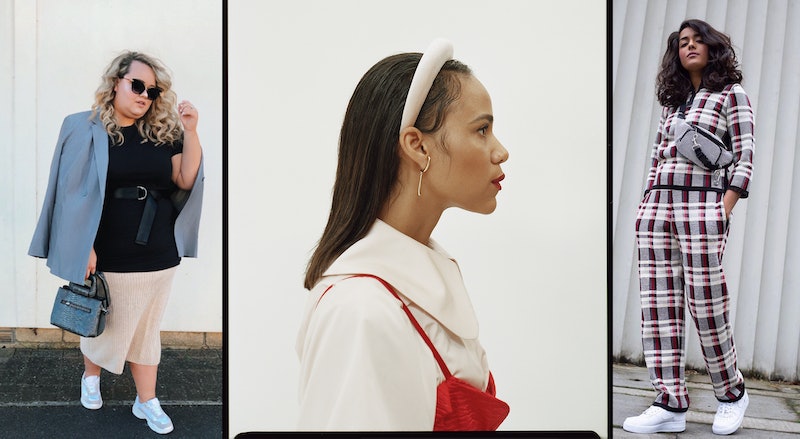 My first memory of the unadulterated joy of fashion involves a pair of brown, patent, crocodile-effect loafers with a teeny, but to my eyes, VERY grown-up heel. I'd seen them on our local high street in Solihull in a discount footwear shop called Fill The Shoe, and I badgered my mother for months about wanting them for my eighth birthday. She'd played it cool — I was otherwise a tracksuit wearing tomboy, so her scepticism was understandable — but I've never forgotten the pure elation I felt when I ripped open my gift during our 6 a.m. family birthday celebration. It was my first successful act of self-image making. I was dressing like the sassy 8-year-old I felt, and I was thrilled.

It's that spirit of joy and enthusiasm we wanted to channel for Bustle UK's first fashion issue. Like many, I found it a hard attitude to hold on to through my teenage and early adult years. Being broke, struggling with self-image, and wanting to be the safe-but-chic side of "normal" rendered the whole process stressful and joyless. But here at Bustle UK, we're fond of breaking the rules when the rules do us a disservice. Power in the fashion industry is changing, with women and non-binary people building their own rules.

There are few people who channel the spirit of stylish anarchy better than British actress Zawe Ashton, who features in our cover story, styled in a crop of British designers we love. Currently starring on Broadway in New York alongside Charlie Cox and Tom Hiddleston, Ashton spoke to Lynette Nylander about growing up in Hackney, ignoring red carpet rules about what she's "famous enough" to wear, and saying out loud what she really wants — including a baby.

Talking of infants, there are surely no children in the world with a greater fashion footprint than the youngest royals. Did you know Prince George is expected to have a £2 billion footprint on the British economy during his lifetime? Yeah, me neither. Lauren Sharkey investigated how the cycle of headlines about royal fashion impacts the economy, picking out 11 truly breathtaking statistics that show just how much fashion power Kate and Meghan have — and the influencers who trump them.

It's influencers that form the fabric of Stephanie Yeboah's oral history of plus size street style. She spoke to 10 of Instagram's most famous faces — including Felicity Hayward and Danielle Vanier — to find out about the challenges they face. These obstacles — from being ignored at London Fashion Week to handling stylists who book you for a shoot then have no clothes that fit you — make the way they've built their own audience, and found their own power, all the more impressive. I recommend you add all the women featured to your Instagram feed, along with the cast of rising stars we include in our Bustle Booth section, and the 9 women and non-binary influencers who tell us what power dressing meant to them. Spoiler alert: there's not a boxy twinset in sight.

The theme of empowering yourself to build you own rules drives our final feature, a fantastic and informative essay by Elizabeth Cline that digs into the way the human impact is often overlooked in the conversation about sustainable fashion. Cline makes a powerful case for caring as much about fair wages for the women making our clothes as landfill and pollution, and her story offers five concrete ways we can all be more responsible when shopping. So when you dig into Bustle's Most Wanted — our pick of the stylish and sustainable clothes you need in your life this season — Just remember: If you don't love it, don't buy it.