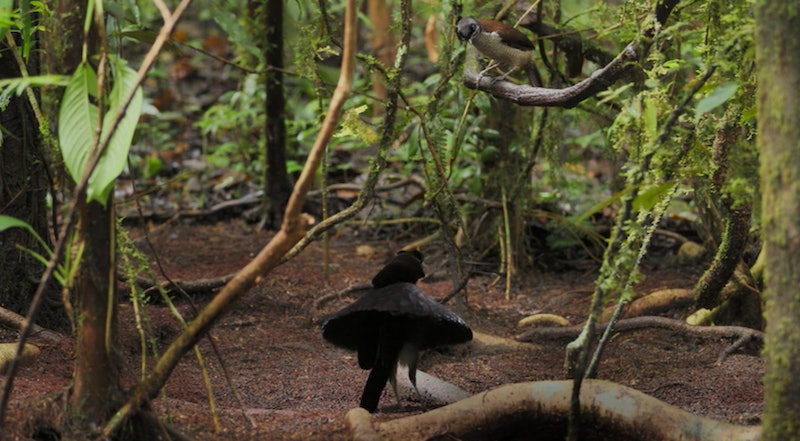 Lovers of nature documentaries have definitely been filling up their cup with lots of lit AF content lately. And one of the most recent ones, Our Planet, is exactly what the doctor ordered. Especially on rainy days when the mere idea of actually being in nature is anxiety inducing. The show is a joy from start to finish, but I am sorry y'all, there is already a stand-out star of the show. So let me tell you why the Western Parotia scene is the best scene in Our Planet.

This is your official spoiler alert if you haven't yet got to episode three of Our Planet, where we get a glimpse of one of the best flirting rituals nature has to offer courtesy of the Western Parotia bird.

Now, we all know dating is hard work (and perhaps the most expensive way to drink win). Real talk, though, after seeing this little guy in action — I think we may all have been doing it wrong.

The phrase "filthy animal" falls flat on its face the minute you watch this scene because, guys, the tidy AF Western Parotia begins his flirting by immaculately cleaning everything around him. And, I mean, let's be real here, you don't have to have feathers to get turned on by someone who has an immaculately clean gaff, am I right?

So, it turns out that the female bird this little fella is trying to attract is pretty particular about where she does her flirting. She won't even give the guy a shot if his little clearing isn't, well, clear. I know this all sounds mad, but David Attenborough totally spills the tea, saying that the female bird is "fussy."

The male does a very elegant bow to his female a la Mr Darcy. He then leaves Darcy in the shade by flashing his blue eye yellow. (Which is probably best, because if Darcy had done that it would be like a flipping horror film.)

Now things are kicked into high gear. After the bow, the Western Parotia puffs his feathers out so they look like a lovely skirt, and he begins to twirl and shake his head plume (and, I guess, his tail feather). All of this with intermittent yellow eye flashes that drive the ladies wild.

This guy's footwork is pretty major, and wouldn't be at all out of place on Strictly Come Dancing. And apparently there's still spots open for the 2019 show, so y'all better watch this space.

Anyway, so the the Western Parotia is pushing his feathers out, spinning like cray, flashing that sexy yellow eye, and guys — it's working. To show she is super into it, the female birtd's head feathers become erect (get your mind out of the gutter) and she shakes her own feathers.

But, hey, it gets even better. Just when you think she isn't into it enough, he decides to flash her. OK, calm down, he flashes her with his iridescent throat patch, of course. Which obviously totally melts her heart and the pair head off to make sweet love.

And of course all this is set to a fabulous musical number — because Netflix really did think of everything.

I mean, who wouldn't be DTF after a potential suitor tidied up, did a wild dance for you, and flashed their iridescent throat patch several times?

When it comes to flirting, we could learn a lesson or two from the Western Parotia.

Watch Our Planet now on Netflix