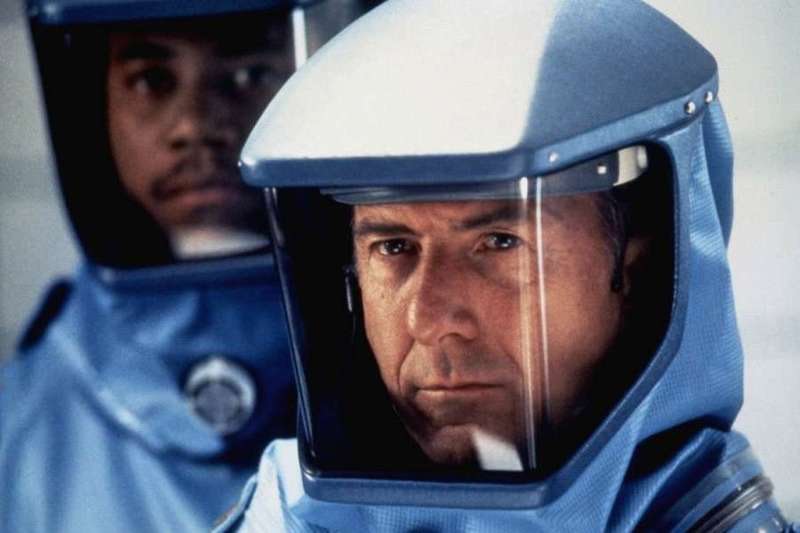 As many of us begin to spend more and more time inside to help flatten the curve during the COVID-19 pandemic, there's been a rise in people watching pandemic movies that reflect our newfound reality. Contagion, the terrifying account of the spread of a global virus, has spiked on the iTunes and Amazon rental charts over the past two weeks. But there's another take on the genre that's rising in popularity: Outbreak. The 1995 thriller is now number nine on Netflix's Top 10 movies and Outbreak is the ridiculous, over-the-top pandemic film we deserve.

Outbreak stars Dustin Hoffman as army virologist Colonel Sam Daniels who is tasked with investigating an outbreak of fatal fevers in Zaire. It's so bad that some victims have their internal organs turned to liquid by the bug. Along with his colleagues Major Salt (Cuba Gooding Jr.) and Colonel Casey Schuler (Kevin Spacey), plus his ex-wife Dr. Robby Keough (Rene Russo) who works for the CDC, Daniels attempts to fight the spread of the virus, which inevitably hits the U.S. soil via a smuggled monkey.

The whole movie is so intensely melodramatic and unbelievable that watching it again during COVID-19 isolation actually made me feel better. Whether it's the smarmy monkey smuggler named Jimbo played by a pre-Grey's Anatomy Patrick Dempsey, the wacky underlying government conspiracy, or the fact that they use a little girl to lure and capture the host monkey at the end — everything about Outbreak is utterly ridiculous. Here are five reasons that this movie is so bonkers it actually offers some levity during this pandemic.

By the middle of the movie, the virus has infected the small, 2,000+ person town of Cedar Creek, California. In order to control the spread of the virus, the President of the United States actually gives the go ahead to bomb the entire town out of existence. Not only that, but at this point in the movie, the virus has only infiltrated the town for a few days, and Daniels hasn't even been given the chance to look for a cure yet...

There Are So Many Explosions

While Contagion is a terrifying drama about bureaucracy and the medical field that lingers in tense silences and dramatic moments, Outbreak goes full-out action movie. There are cars that get blown up, villages that get eradicated, guns fired, and helicopter chases that could go up against a Michael Bay movie any day.

Since actor Kevin Spacey has been accused of sexual assault by multiple accusers, watching his old movies, no matter how good, has been kind of icky. In Outbreak, Spacey plays a smug virologist who's a total a*shole. So when Spacey's character ultimately catches the virus and ends up bleeding from his eyeballs — it's actually quite satisfactory.

No One Acts How They're Supposed To

Part of what makes the outbreak spread in Outbreak is that no one actually behaves how they would in real life. There's the lab technician who is listening to a baseball game so intently that he shatters an entire tray of blood vials into his own face. Then there's the lab tech's own doctor who disregards the fact that he's just had multiple blood samples explode in his face and doesn't take any further precautionary measures during the examination. Everyone in Outbreak acts like really serious things are no big deal to the point where it's comical.

The End Is So Strange And Abrupt

Aside from the pandemic, the central plot of the film is the underlying romance between Hoffman's Colonel Daniels and his ex-wife, Dr. Keough (Russo). After Daniels saves the town of Cedar Creek and finds a cure for the virus, he reunites with his infected ex-wife by her bedside. The two smile, and flirt a little, and Daniels asks, "Would you do it all again?" Robby smiles and says, "Maybe. Now that I have the antibodies." The movie fades to black and the credits roll. Sure the finale lines are meant to be a joke about their marriage, but the ending is so abrupt, odd, and lacking in any chemistry that it feels like there's something missing.

So if you're kind of having an itch to watch a pandemic movie to get you through this tough time but are a little scared of actually doing so, maybe give Outbreak a try. It's so ridiculous it might actually make you smile.

More like this
Austin Butler Recalls Lisa Marie Presley Showing Him Elvis’ Bedroom
By Jake Viswanath
Pamela Anderson’s Dating & Marriage History Could Be Its Own TV Series
By Jake Viswanath
Another Side Of Rupert Grint
By Maria Sherman
Owen Thiele Asked Sundance Attendees About Films That Don’t Exist
By Grace Wehniainen
Get Even More From Bustle — Sign Up For The Newsletter
From hair trends to relationship advice, our daily newsletter has everything you need to sound like a person who’s on TikTok, even if you aren’t.