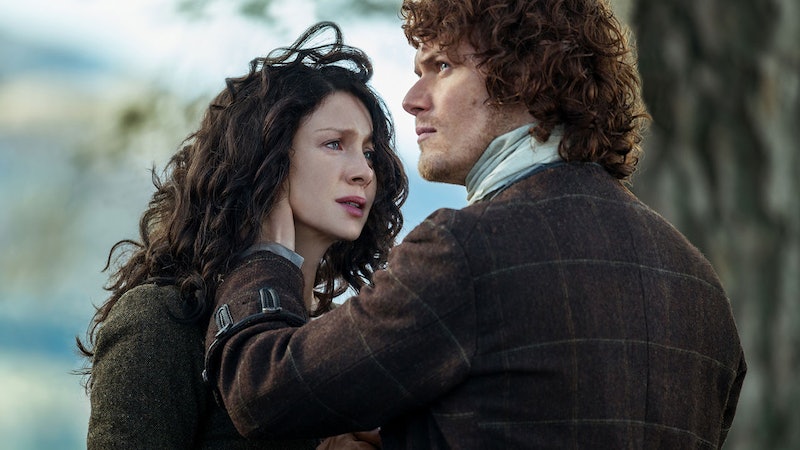 Starz gifted romantics with a belated Valentine's Day present on Wednesday when the cable channel (finally) announced Outlander's Season 3 premiere month. According to Deadline, Outlander Season 3 will premiere in September, but the exact date is still to be determined. On the one hand, fans finally know when the long "Droughtlander" will come to an end, but on the other, September is still months away. Don't cry just yet, Jamie/Claire fans, because the good news is Season 3 is so going to be worth the wait.

After all the trauma the time-traveling couple faced in Season 2, the next installment in their epic love story is going to usher the series into an entirely new era. In order to chronicle the events in the third book of Diana Gabaldon's best-selling historical fantasy series, Voyager, in its entirety, the Starz team is going to great lengths to get the details of the multi-time set, continent-crossing adventure just right.

"While 'Droughtlander' will last just a little longer, we feel it is important to allow the production the time and number of episodes needed to tell the story of the Voyager book in its entirety," Carmi Zlotnik, President of Programming at Starz told Deadline in a statement. "The scale of this book is immense, and we owe the fans the very best show. Returning in September will make that possible."

Part of the long wait is due in part from the show moving filming from Scotland to South Africa. The Frasers are heading to an entirely new continent in Season 3, as they embark on a sea voyage. If the idea of seeing Jamie and Claire reunited and frolicking in the sunshine doesn't have you excited, then just look at how excited their portrayers, Sam Heughan and Caitriona Balfe, are to film in a new locale.

The scope of Season 3 is going to be massive. The official synopsis reveals part of the season will follow Claire and Jamie's separate lives as Claire readjusts to life in the 20th century with her husband, Frank. Not only will Claire be adjusting to her return to the present, she will be embracing her life as a new mother, and furthering her medical career. It will be an older, wiser Claire who returns to the past to find her other husband, Jamie's life has changed as well.

While Claire is building a modern life for her new family, Jamie is back in the 18th century navigating a world where he is branded a traitor. After the battle of Culloden, he has to rebuild his life without Claire, and it is going to take the character in an interesting new direction. Of course, the best part of Season 3 will undoubtedly be the reunion between the star-crossed lovers, but there is going to be plenty of excitement in their respective timelines as well.

Between the promise of an adventure into parts unknown, a reunion, and the opportunity to see the series delve into who Claire and Jamie are when they are apart, Outlander Season 3 is shaping up to be the most exciting season yet. The longer wait means Starz has the time to construct a story with even more depth and romance than ever before, and in exchange, fans are getting a richer experience. September is coming, guys, and the always steamy Frasers are going to make sure you stay warm this fall.