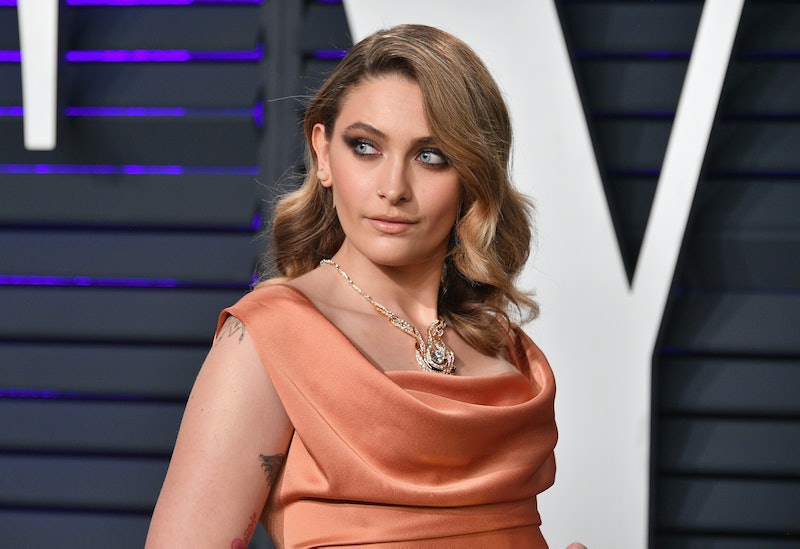 Four days after Leaving Neverland premiered on HBO, Michael Jackson's daughter appeared to speak out against the two-part film for the first time. In a series of tweets on Wednesday (March 6) and Thursday (March 7), Paris Jackson's seemed to address Leaving Neverland, though she did not mention the documentary by name. The HBO documentary, which focuses on two of Jackson's alleged victims, Wade Robson and James Safechuck, who claim that the singer molested them as children, made waves over the weekend. Neither 20-year-old Paris — nor her two siblings, Michael Jackson Jr., 22, and Prince Jackson, 17 — had spoken about the documentary before her tweets this week, which reference "tabloids and lies" apparently about her father.

On Wednesday, in a now deleted tweet, the 20-year-old addressed claims that she was worried about how Leaving Neverland would effect her own career, according to People. “I actually haven’t made any statements yet," Paris reportedly tweeted, "especially regarding how it affects my work life. you guys are reaching a bit."

Shortly after, Paris suggested that fans shouldn't read too much into her tweets — “ya’ll take my life more seriously than I do," she wrote — before seemingly apologizing for downplaying the seriousness of the molestation allegations against her father. “I know injustices are frustrating and it’s easy to get worked up," she tweeted, "but reacting with a calm mind usually is more logical than acting out of rage and also…. it feels better to mellow out.”

Paris then continued to respond to tweets regarding her father. She started with a fan, @omertaamor, who took umbrage with what they felt was her flippant response to her "father’s legacy ruined and his name smeared forever."

“so….. not love and peace and trying to carry that message out?" Paris responded in the early hours of March 7. "tabloids and lies are the bigger picture? i’ll pray for you.”

Paris again asked for calm on the social media site when @omertaamor responded again, questioning why she wasn't getting more worked up about those who "want to tear his name down and stop playing his music." Complex has reported that some radio stations are banning Jackson's music following the documentary.

"yeah they do that to everyone with a good heart and tries to make a difference," Paris wrote, in what could be interpreted as a defense of her father, "but do you really think that it’s possible to tear his name down? like do you truly believe they stand a chance?"

She then apparently questioned the reports in the media regarding her father's alleged abuse, agreeing with fan @_lostghost, who tweeted that all the "media wants is to get a reaction."

This isn't the first time Paris has defended her father against the multiple allegations of molestation, which first came to light in the '90s. (In 2005, Jackson was acquitted by a jury in California on charges of molestation, attempted molestation, plying minors with liquor, and conspiracy.)

In a 2017 interview with Rolling Stone, Paris condemned the allegations, saying she had no doubt that her father was innocent. “Picture your parent crying to you about the world hating him for something he didn’t do,” Paris told the magazine. “And for me, he was the only thing that mattered. To see my entire world in pain, I started to hate the world because of what they were doing to him. I’m like, ‘How can people be so mean?’”

Paris isn't the first of the Jackson family to respond to the documentary, which does not hold back with the details regarding Robson and Safechuck's allegations of abuse that they claim started when they were kids and continued for years later.

Following the announcement that Leaving Neverland would premiere at the 2019 Sundance Film Festival, the representatives for the Jackson estate wrote in a statement to Variety that the documentary "is yet another lurid production in an outrageous and pathetic attempt to exploit and cash in on Michael Jackson.”

After its premiere at the festival, the Jackson estate released another statement to Variety that called Leaving Neverland a "tabloid character assassination" and "public lynching." The statement also referred to Robson and Safechuck as "liars" who the media chose to believe "over the word of hundreds of families and friends around the world who spent time with Michael, many at Neverland, and experienced his legendary kindness and global generosity." Jackson's brothers Tito, Marlon, and Jackie Jackson, and his nephew Taj, also publicly defended the performer in a CBS interview, refuting the men's claims.

Paris has yet to officially go on the record regarding the detailed allegations presented in Leaving Neverland. In fact, she might choose never to comment directly on the documentary. Fans will have to wait and see.