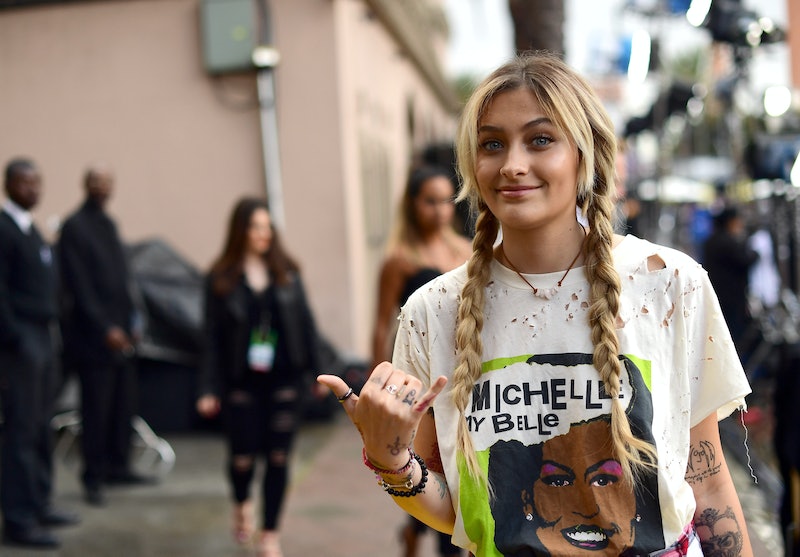 By now we all know how "anything goes" on the MTV red carpet. Some stars show up looking ultra glam, while others prefer a more laid back look. The latter describes Paris Jackson tshirt on the MTV red carpet, which was broken in and comfy — with a little political touch.

Yes, that lovely silkscreened face peaking out from behind Jackson's long blonde hair was none other than former first lady Michelle Obama's. The image seemed to be a take on this FLOTUS Cafe Press tshirt, which featured the phrase "Michelle Ma Belle." (Which is, of course, a reference to The Beatles song Michelle Ma Belle.)

Jackson's tshirt was ripped up in a very on-trend way. While I doubt she did it herself, it's entirely possible. There are millions of DIY videos on YouTube detailing how to distress a tee, and they almost always include how to perfectly snip little holes.

Jackson paired the grungy look with some loose pigtails, a few bracelets, and a simple necklace. She looked like she had been hanging with some friends before strolling off to the red carpet, and I kind of love that. And I kind of love that she gave a shout out to Michelle Obama. She probably misses her just as much of the rest of us.

The whole look, complete with plaid shirt, jeans, and Converse sneakers, was about as cool as it gets.

More like this
Bella Hadid's Best Runway Looks From Paris, Milan, & More
By Allie Fasanella
Here Are Doja Cat's Best Looks From Fashion Month SS23
By Dominique Norman
Halsey Rocked The Exposed Thong Trend At Paris Fashion Week 2022
By Allie Fasanella
Gigi Hadid Has Been Wearing UGG Boots Nonstop At Paris Fashion Week
By Dominique Norman
Get Even More From Bustle — Sign Up For The Newsletter