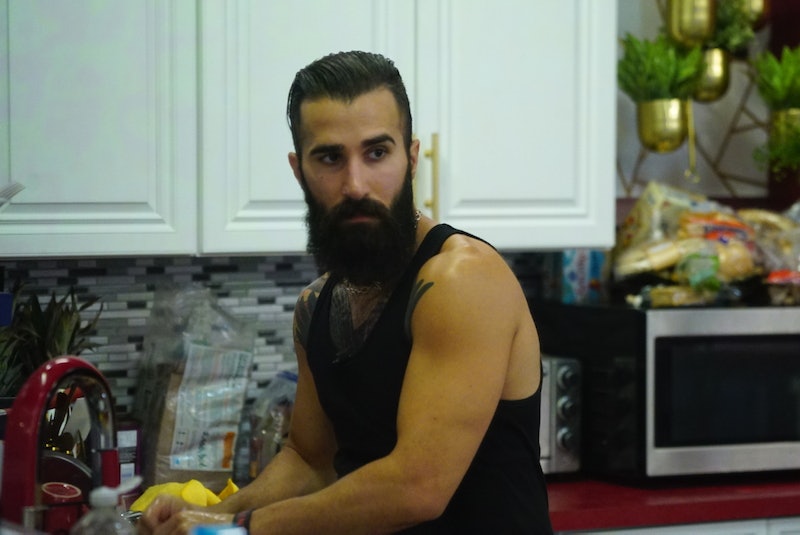 Paul is one of the most impulsive people in the Big Brother 19 house. That's exactly what makes him such an interesting player to watch. But now an impulsive decision is leading him into some hot water. It appears as though Paul will be doing blackface on Big Brother — somewhat unwittingly — to shade Dominique. Fans are reasonably concerned about this poorly thought out prank, and many of them are tweeting out how insulted they feel by the prospect. But it seems that there are some important details being overlooked. (Bustle has reached out to CBS, who didn't comment on the matter.)

Paul's line of logic did not seem to include or acknowledge the racial connotations of what he is planning to do. Paul is attempting to dress up as a snake, a well-known Big Brother insult, to mock Dominique. It seems that Paul can't go more than one day in the house without accusing someone of being a snake, and he thought that dressing up as one for the veto or live eviction would be the best way to call Dominique out for however she's offended him. So how did "dress like a snake" devolve into "cover your face in black goo to publicly call out a black woman in the house"? It all came down to a choice of face mask. (As a note, Paul hasn't yet put on the mask, but has made his plan clear to other houseguests.)

When putting together his snake outfit, Paul came across an important choice. Would he be using a green mud mask or a black charcoal mask to emulate the face of a snake? While there are black snakes in the world, most people on earth would sooner associate a snake with the color green than black. (Hence the green snake emoji.) However, Paul argues that the snake-pattern dress he's hoping to wear is black and white and that a black face would better match the black outfit.

For someone who isn't considering the racial undertone of wearing a black mask to intimidate a black contestant, this sounds like a reasonable line of logic. But by ignoring the oppressive and humiliating history of blackface, Paul is accidentally intending to perform an extremely racist gesture towards Dominique. Big Brother is no stranger to racial controversies in past seasons or even in this season, but if Paul follows through with his plan, it will go down as one of the most brazen displays of ignorance to ever be aired on Big Brother. The question now is will he be allowed to do it? So far, no one he's mentioned his plan to has addressed the racial undertones that the mask would convey, even when he was discussing whether he should do green or black.

Paul appears to literally have no idea that wearing the charcoal mask will come off as racist, and he doesn't have access to anyone outside the house that might be able to dissuade him against his plan. Others in the house might want to tell him, but that might complicate their friendship with Paul and turn him into an enemy. Others may not be telling him with the hopes that he'll embarrass himself and either learn from his mistake or remove himself from power.

Since he doesn't see the issue clearly, what this really comes down to is whether or not someone will intervene and stop him from executing his plan. I hope someone speaks up, because Paul has a lot to learn about how to play the game while being respectful of houseguests of color.