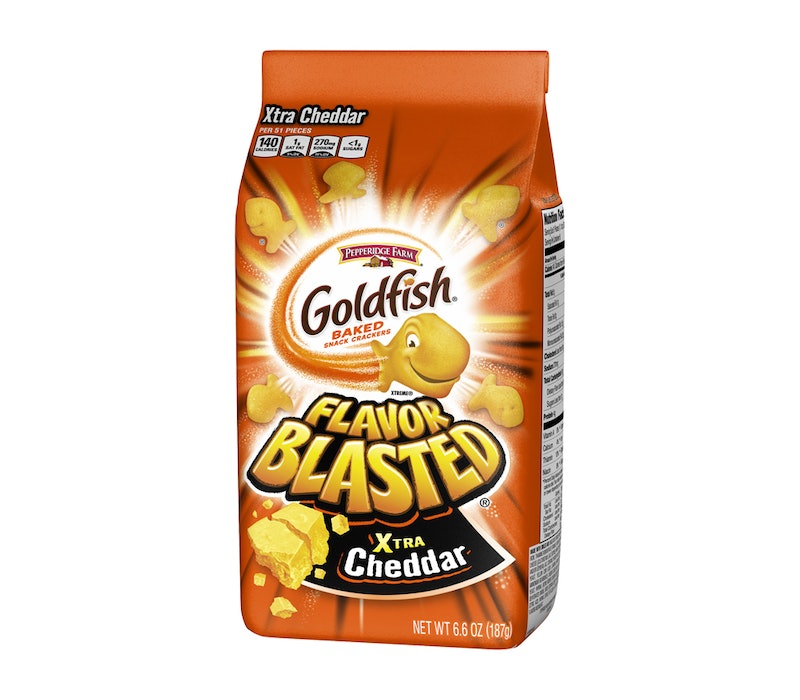 Unfortunate news today for anyone who lives and breathes nostalgia: Pepperidge Farm has recalled four flavors of Goldfish crackers due to possible salmonella concerns. The company said in a statement released both on Twitter and on Pepperidge Farm’s website that no illnesses have been reported; the decision to recall the products “was made out of an abundance of caution.” The company has also launched an investigation into the matter. Better safe than sorry, right?

Pepperidge Farm announced the recall on Monday, with the four affected flavors being Flavor Blasted Xtra Cheddar, Flavor Blasted Sour Cream & Onion, Goldfish Baked with Whole Grain Xtra Cheddar, and Goldfish Mix Xtra Cheddar + Pretzel. These four flavors come in a number of different types of packaging, many of which are included in the recall; you can see the full list of affected products, including UPCs, descriptions, sell-by dates, and images, here. There are about 18 different items on the list, so if you’ve currently got any of these Goldfish flavors in your pantry, make sure you check to see whether it’s present and accounted for here. The products were distributed across the United States, but no other Pepperidge Farm products are included in the recall — just these four Goldfish flavors.

The trouble seems to have stemmed from a specific ingredient used in the seasoning for these four varieties. According to Pepperidge Farm, one of the company’s ingredient suppliers recently informed them that the whey powder they use was recalled by the manufacturer “due to the potential presence of salmonella.” Upon receiving this notification, the company began conducting an investigation and subsequently voluntarily recalled the potentially affected products.

Pepperidge Farm urges people who have bought these products not to eat them; you can either throw them out or return them to the store from which you purchased them for a full refund. Additionally, if you click here, you can contact Pepperidge Farm for reimbursement.

According to the Centers for Disease Control and Prevention (CDC), salmonella is one of the most common foodborne infections in the United States; approximately 1.2 million cases emerge in humans each year. It’s spread via contact with infected feces — which is how it makes its way into food: As Foodsafety.gov puts it, “Because the natural home for salmonella bacteria is in the gut of these animals, their poop becomes a carrier of the germ if it gets into food or water. For example, if water used to irrigate a field has animal poop in it, the water can contaminate the food growing in the field.” It can also spread during food preparation.

Common symptoms of salmonella include diarrhea, fever, headaches, and abdominal cramps. These symptoms usually present between 12 and 72 hours after infection; the illness itself, however, typically lasts between four days and a week. People often are able to recover without treatment, but severe cases may require hospitalization. Either way, though, it’s not fun — which is why prevention is so important.

The good news is that preventing the spread of salmonella is actually pretty easy. Basic food safety will go a long way toward protecting you from the bacteria, including cooking meat, poultry, and eggs thoroughly; washing hands and utensils frequently with soap and water; washing fruits and vegetables before preparing, cooking, or consuming them; not washing meat or poultry before cooking it (washing meat can actually spread salmonella); and not preparing food for anyone if you’re experiencing diarrhea or vomiting yourself.

So: Be safe. Stay on top of the news, and if you’ve got any of these products in your pantry or fridge, throw them away or return them. Here’s hoping the issues get resolved soon.